By Nat Eliason in Entrepreneurship 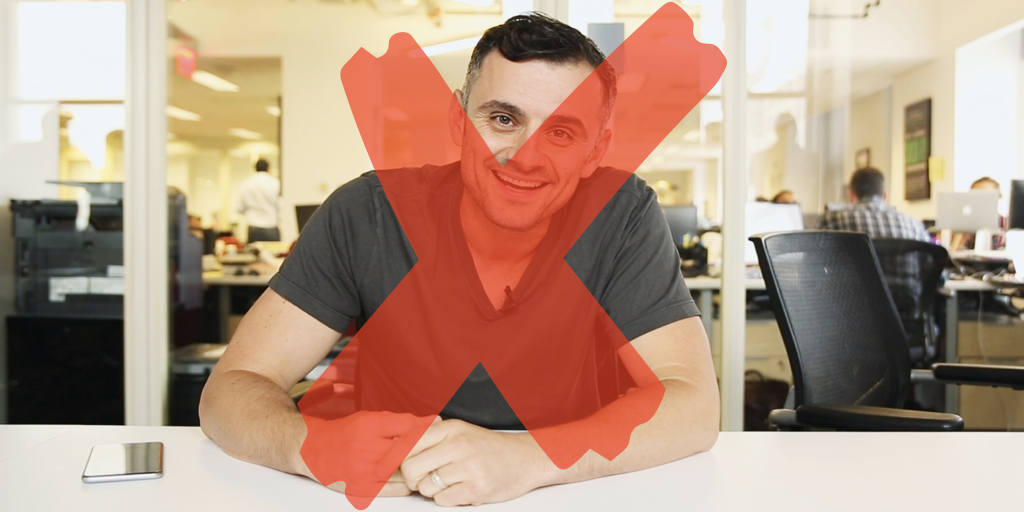 I say @GaryVee because I don’t know Gary Vaynerchuk personally. He could be delightful and entirely unlike his online persona. But his Internet character is doing harm to would-be entrepreneurs.

Go watch a typical post from GaryVee if you’re not familiar with him:

There are two messages being sent. The first, the obvious one, is “Entrepreneurship is hard, work hard and you can succeed.” Nothing new or wrong with this.

The issue is the second layer, the message underneath much of what GaryVee broadcasts: struggling is good.

You should be working long hours, failing for ten years, starting a side hustle to fund your side hustle. You shouldn’t be comfortable because comfort is death, or worse, mediocrity. I mean shit, he even suggests feeling suicidal is normal. Notably absent is the step where you get to start with a $3,000,000 wine business (1).

Entrepreneurs devour this message like doughnuts at a WeWork because most of them are failing. I think Vaynerchuk would want them to hear “If I work hard at the right thing I can succeed,” but the message is easily misinterpreted as “if I’m struggling, I’m doing the right thing.”

I went through a startup accelerator when I was in college, something I’ve written about from other angles here and here, and one thing that stood out to me is how many people in the entrepreneurial community were working on businesses going nowhere slowly.

In one particularly egregious case, someone had been building a company for four years, had no revenue or customers, and would sneak into his alma matter’s cafeteria to steal food to extend his runway. Last I checked he was still working on it. He’s also a big fan of GaryVee.

Of course, there were some big successes out of the Pittsburgh startup ecosystem, but the vast majority of people in the accelerators and community were strugglepreneurs: people building businesses going nowhere quickly that felt they were accomplishing something because they were struggling.

Rule #1 of #StrugglePorn: if someone is bragging about how hard they're working, you can be sure their business is failing.

I don’t know anyone running a multi-million dollar business who follows struggle pornographers like GaryVee. They don’t need the feel-good reassurance that beating their head against the wall is worthwhile. They’re making money, not LinkedIn posts. They’re busy, not struggle busy.

A good way to tell if that’s what you’re following is the value of whatever media someone posts. Most of GaryVee’s posts are just variations on the same message: work harder, stop doing a job you hate, you can do it, look at me I’m GaryVee. He occasionally breaks from that to try making something useful, like this post on how he grew VaynerMedia, but it’s a 550-word fluff post that says “culture is important.”

I’ve been picking on GaryVee a lot since he’s an easy target, but this applies to most of the entrepreneurs on Instagram. Going through the “ten Instagram accounts every entrepreneur should follow,” it’s more of the same junk. Photos of them with some motivational quotation plastered over it, sharing some platitude and telling their followers to follow their dreams (2).

If you’re looking at motivational quotations on Instagram while squatting over the toilet, that’s not going to solve your creative roadblock. And if you’re one of the Instagram accounts spreading #struggleporn, please stop.

But the broader takeaway is to avoid focusing on bad proxies for success. How hard you’re working isn’t a good indicator of the value you’re creating or the progress you’re making. It’s a vanity metric: just as how many Twitter followers you have is a poor measure for the vitality of your business, the amount you’re struggling isn’t a good measure of how much you’re learning and progressing.

1. This is a cheap shot, I know, but it's ridiculous that someone who was given this insane of an entrepreneurial head start is telling people to stop working normal jobs and start a business "like him."

2. The Instagram accounts of popular entrepreneurs are so similar I have to wonder if they aren’t hiring the same media agency to run them. Or if they’re all just copying each other.

The Founder Trap
How to Start a Blog that Changes Your Life
Old Business, New Tricks
How to Make Passive Income
How to Start a Podcast in 2019: 8 Steps from Idea to Launch