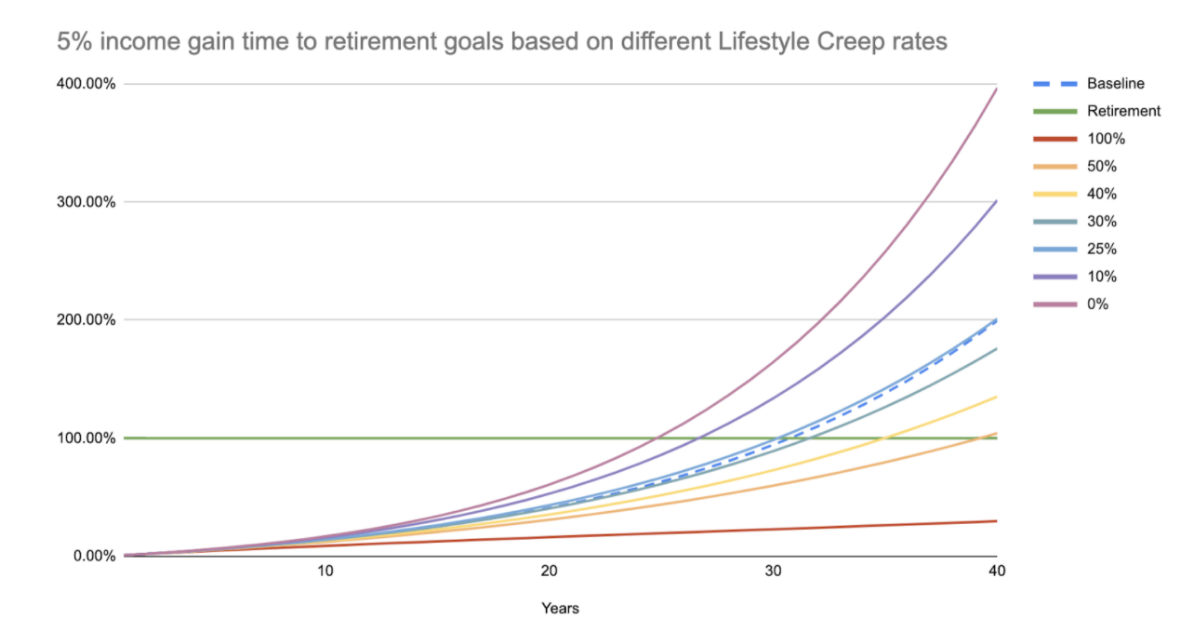 Some clever Mr. Money Mustache types reduce their spending enough to retire early. But whether someone is making $60,000 or $600,000 a year, hitting early retirement is rare.

Which is weird since it’s at least theoretically achievable for any income level. If you invest 25 times your current salary, you’ll be able to live off the returns indefinitely.

Sounds simple enough, but there’s a hitch. Unless you’re extremely diligent in controlling lifestyle creep, retirement gets further away as your income increases.

The “save 25x your salary” early retirement math assumes you’ll keep making and saving the exact same amount every year for the next 30+ years until you hit your goal. But what if your income increases and you don’t adjust your savings appropriately?

Unless you add any increase in salary to your investing allocation so that your lifestyle never inflates, you would eventually start living off more than $100,000. As you’re making more money, you’ll start upgrading your car, house, clothes, etc. Soon that $100,000 life wouldn't be as desirable anymore, especially if it means downgrading all your stuff. Maybe now you're used to a $150,000 lifestyle.

Which leads us to the problem: the more your income grows, the longer it will take to hit your retirement goal, unless you make sure to re-invest 75% or more of all increases in your income.

To understand why, consider two people making $100,000 a year. Their goal is to retire in a way that lets them maintain their lifestyle, which in this case, means they need about $2,500,000 saved up.

One of them keeps their income consistent and never makes more money or changes their savings. They'll keep diligently saving 25% of their income, and in about 31 years, they'll have enough to retire:

The other one keeps getting a raise of 5% per year, but instead of saving more, they spend that money upgrading their lifestyle. Since they're getting used to a 5% better life each year, their retirement goal is going to keep increasing since they need more money invested to passively withdraw enough to sustain their new lifestyle. So even though they're making more money, they're getting further away from retiring:

Even if they save 50% of their additional income, they're going to take an extra 9 years to retire compared to the person who never got a raise!

Let's call it 25% to make things easier. That means that if your goal is to retire and live off the interest of your investments as soon as possible, you should plan to save and reinvest 75% of all increases to your income.

Next time you get a raise or change jobs, to make sure you don't delay your retirement or early retirement goals, find a way to pre-allocate 75% of that increase so you never see it and aren't tempted to inflate your lifestyle.

There are a few finer points from this analysis that are useful as well:

It doesn’t matter what your salary is, the 75% rule still applies.

It's the same! Why? Because your retirement goal is based on replacing your salary, which requires saving up a multiple of your salary. It doesn't matter what your salary is since you still need to save some percent of it to get to the goal multiple (25x your salary).

Your savings rate speeds up the goal, but doesn’t change the re-investing rule.

Here's what the chart looks like if we change the savings rate from 25% to 50%:

You cross the retirement threshold about 8 years sooner, but you still have the same acceleration or deceleration spread based on different re-investment rates.

But this does also show that you could start at 50% savings rate then reinvest less, say 50% instead of 75%, and you'd still hit your retirement goal faster than when you started out saving 25%. This is a good case for starting out saving very aggressively early on in life so you're used to a more modest lifestyle, then being slightly less strict about controlling your spending as your income increases.

You still need to reinvest 75% to not mess up your goals, but now the difference in outcomes if you go above or below that 75% is much more stark. At 60%, you take an extra 9 years to hit your retirement goal. At 90%, you hit it 9 years earlier!

This tells us two things: the faster your income grows, the more strict you need to be about maintaining that 75% reinvestment rate. Otherwise you’ll significantly delay hitting your retirement goal.

And if you want to hit your retirement goal faster, being very strict about reinvesting increases in income is just as effective as increasing your savings rate. Which is great because it sounds way better to only see 25% of the increased lifestyle from future raises versus having to cut your lifestyle by 33% right now.

Everyone has heard the advice to not let your lifestyle creep too much as you make more money, but I find doing the math really helpful for understanding how extensively you need to control it.

As soon as you get any kind of raise, find a way to allocate 75% of it to savings and investments before you have the chance to get used to it. Otherwise your chances at early retirement just gets further and further away.

Thank you to Nick Maggiulli from Of Dollars and Data for helping me with the spreadsheet for this post. If you’d like to play with the sheet yourself, you can make a copy of it here.

The Money Pile: When should you take money off the table?
The Problem with Retirement Funds
Money or Wealth
No, You Don't Need a Budget
The Best Articles to Learn about Bitcoin, Ethereum, and Cryptocurrency