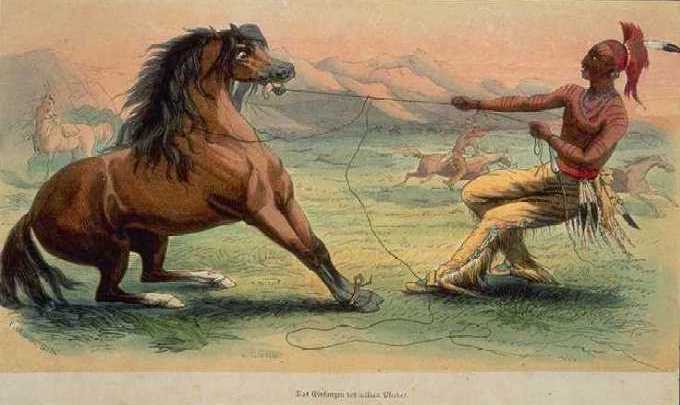 Taming a wild horse is quite difficult.

They’re powerful animals, and when used to a life of freedom they strongly resist being held captive.

An untrained person might be inclined, once they have a rope on the horse, to try to hold it in place until it relaxes.

But this terrifies the horse. He’ll buck and fight and keep resisting you, and you’ll keep holding the short rope in vain.

What cowboys eventually figured out was that trying to immediately restrain the horse was almost impossible. It needed to feel like it was deciding to come to the cowboys, not that it was being forced to.

Instead of trying to hold the horse in place, they would give it a very long rope, letting it run far from the cowboy and giving it the illusion of being free.

When the horse gave up some slack they would slowly reel it in and continue shortening the rope in this way.

Through small gradual changes they tamed the horse with a speed and effectiveness that would have been impossible by immediately restricting it.

Your Mind the Horse

The horse has been used as an allegory for the mind for over 2,000 years.

Plato described the soul (which we can also call “the mind”) as a three part system operating as a chariot: A logical portion represented by the chariot driver, with the two horses representing the soul’s spirited and appetitive portions.

The logical portion drives us to learn, think reasonably, and do things that are in our best long term interest.

But directing a wild horse is just as difficult as taming one. The driver is the weakest part of the system. If the horses are untrained, and if the driver is not strong, then the horses will run in any direction they choose, unable to avoid their pull towards base desires. But a strong driver who knows how to manage the horses can direct your spirit and appetite towards the goals that your rational mind desires.

(If this talk of the soul and chariots isn’t your thing, Chip and Dan Heath wrote an excellent book called “Switch” that borrows this analogy, turning the chariot into a rider on an elephant. If the elephant is trained the rider can direct him, but an untrained elephant will ignore the rider.)

Any time we find ourselves eating things we shouldn’t eat, spending more time on Facebook or TV than we should, or hitting snooze repeatedly; that’s our horses taking over control from our driver and doing what they want.

Everyone has equally strong horses. We all share hedonistic desires to eat junk, goof off, sleep in.

But we don’t all have equally strong drivers. Our ability to affect any change in our lives is a function of the strength of our drivers, but also how we treat the horses.

The Problem with New Year’s Resolutions

I asked a group of people to give me some examples of common New Year’s Resolutions. Here are some of the ones they came up with:

They’re all noble goals, but they’re destined to fail. They each misuse the chariot in one of two ways:

1. They try to reign in the horses too quickly, causing the fight to be much harder.

2. They give the horses no clear direction, so they’re prone to run in circles and go nowhere.

Reigning the Horses in Too Quickly

Many people will set January 1st as the day they make a big change in their life.

Any huge change in your life that you try to make overnight is the equivalent of the driver grabbing a wild horse by the reigns, holding its head down, and expecting it to chill out and oblige.

That simply does not happen. The horse will buck and fight, pull harder on the reigns than before, and the rider will get exhausted.

For us, that means we’ll be fighting temptation to break our new goal at every turn, we’ll constantly be struggling to keep to it, and we’ll be mentally exhausted from using all of our willpower on this one change.

How do you make these goals manageable? The same way you tame the horse: by letting it out on a very long rope, and slowly pulling it in.

Instead of saying ““I’m going to stop drinking” start with “I’m not going to drink on Mondays.” Do that for one week, then graduate to Mondays and Tuesdays. Every week you succeed, add in a new day. The continual success will motivate you to keep going and prevent you from being mentally exhausted.

Or if you want to start working out every weekday, just work out one day. Once that’s in your schedule and natural, graduate to two, and so on. Make it as easy as possible to succeed and prevent yourself from failing.

Giving the Horses No Clear Direction

The second major problem with New Year’s Resolutions is giving the horses no clear direction. In this case, the “resolution” is vague and doesn’t make it clear what you should be doing.

The first problem is that in all of these situations, your driver has a vague end goal but no clear direction on how to get there.

The second problem is that most of them don’t have a clear way to tell if you’ve succeeded.

The third problem is that they lack urgency. A “New Year’s resolution” implies that you have all year to get something done, but none of these goals require the entire year to achieve, just to sustain.

The solution is to keep your resolutions SMART.

When you’re defining your resolutions, use this framework:

But is That Even a Resolution?

Not really, which is why the article is titled the way it is. It would be better to think of any of these as a New Year’s “Goal.” A resolution is, by definition, vague and immediate, which means it’s also destined to fail. Instead of “resolving” to do something in your life, set one to three big goals for the year based on the frameworks above, and then make sure they happen.