Personal Leverage: How to Truly 10x Your Productivity 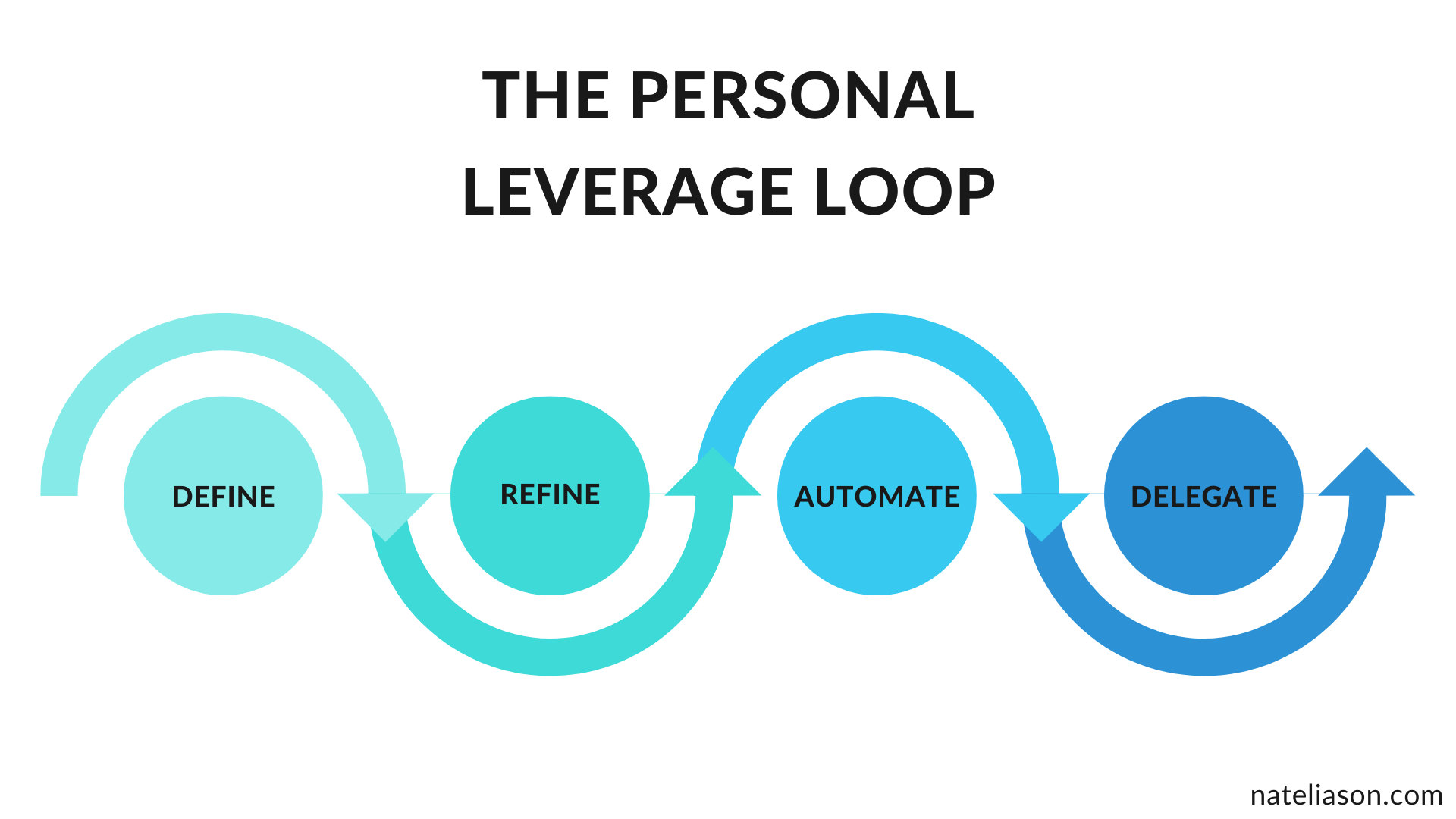 Our days are fixed. You have no less time than Musk or Bezos.

Some use their 24 hours to accomplish a seemingly impossible amount of work.

Others waste it on minutia, repeating the same few tasks over and over again, perhaps eking out 5 to 10% improvements each year.

We want to believe we’re in the first camp: making heroic progress and accomplishing great feats of productivity.

But if you’re focused on finding the right productivity apps and hacks, you’re in the second.

No tool or workflow strategy can 10x your productivity.

You can only do it through personal leverage.

What is Personal Leverage

Financial leverage involves using other people’s money to improve everyone’s returns. You, and anyone you get additional money from, are all taking on some risk, but you’re also all going to potentially make a lot more money.

It’s a tradeoff. You can be completely safe and take on no leverage, and while you could still fail, the outcome would be less bad. Or, you can take on a moderate amount of risk and increase your returns while also potentially increasing the downside.

Financial leverage is one of the most powerful forces for getting wealthy, and one dramatically underutilized by most people. If you look at any ridiculously rich person, part of how they got there was by having the confidence to take on some leverage to increase their upside if they succeeded.

Most people don’t have access to significant amounts of financial leverage until they’ve demonstrated some level of success. But we all have access to another form of leverage which can be the difference between increasing your salary by 10% per year and doubling it every year.

It’s called Personal Leverage: a measure of your ability to extend your productivity beyond yourself.

There are two ways you can increase your personal leverage:

The best way to figure out how to extend our work beyond ourselves and take full advantage of personal leverage is to go through what I’ll call the Personal Leverage Loop:

Until you've clarified exactly what goes into the process you're trying to build a system for, you can't systematize it. That sounds obvious, yes, but it's easy to fall into the habit of doing something over and over again without clarifying what the steps are.

We learned this at Growth Machine when we started hiring more people. We were getting some of the same questions over and over again, which told us we hadn't done a good job of clarifying how to do the work we were hiring people to do.

So we went through every role at the company and created standard operating procedures to explain how to do every single thing that someone might have to do more than once.

This created a massive library of SOPs in our shared Notion database explaining how to do things like hire a freelance writer, pay an invoice, upload articles, and much more so that no one needed to explain how to do things anymore.

That not only ensured tasks were being done properly, it meant no one had to spend time constantly re-teaching how to do things. The system was defined, and once the system is defined, it's possible to start automating and delegating it.

But before you start removing yourself from the system you just defined, you should take another pass through it and refine it.

Every process is going to be messy at first. The steps to complete it likely evolved haphazardly over time, and unless you deliberately cull the steps involved to get a process done, they tend to get more and more complex without necessarily enhancing the outcome.

Before you consider automating or delegating a system you’ve defined, put each step under a microscope and see if it can be removed, rolled into another step, or if you can create some new step that removes a handful of others.

For example, when we started writing up the SOP for sending our client updates at Growth Machine, we realized there were a lot of steps involved pulling all the data from multiple places.

So we found a way to automatically centralize the data in Google Studio, and then any project manager only needed to open one page to get all the data they needed. We took 3 or 4 steps and turned them into 1.

Or you might be able to create new rules to replace a bunch of other rules. One of mine for delegating my email is, instead of trying to figure out whether or not to respond to every single cold email, always archive the first one and see if they follow up. Will this end up missing some opportunities? Yes, but it saves me and Amanda a ton of time trying to decide what to and not to reply to.

So if you see anywhere in your newly documented system that seems overly complicated, think about how you could either cut out some steps or make a new step that replaces a bunch of old ones. You can often cut 20-50% if not more of the steps out of a system without harming the outcome.

Once you've done that, then you can:

Look at each individual step of your newly refined process and ask yourself, could a machine do this?

For example, a lot of steps in the Growth Machine SOP for "uploading a new article" can be done with a tool like Wordable or MagicPost. Instead of copying, pasting, and formatting text every time, those tools can do the bulk of it for us on WordPress or Shopify.

Another tool I love for this is Zapier, since once you learn how to use it you'll find all kinds of things you didn't realize you could automate. I have a crazy 20-step automation to create all the subtasks and documents necessary for taking a new YouTube video from idea to completion. Instead of having to set each task up myself, Zapier can do it for me.

It's really important though that you don't skip straight to the automation step: if you don't define and refine the system first, it's easy to waste a lot of time trying to automate something that doesn't need to be automated or that could be automated much more simply. It’s fun to try to automate something or hire a tool to solve a problem, but by skipping ahead to this fun step we often create unnecessary complexity.

But assuming you did adequately define and refine the process first, this is the essential next step before you consider hiring someone.

You'll have a lot more success hiring someone to do something if you define and refine the process as clearly as possible, and if you automate out as much of the tedium as possible. No one wants to just do the same repetitive tasks day in and day out, so if there’s any opportunity to automate out the tedium, find a way to do it.

Once you've gone through all the steps in your system and automated the ones you can, you'll be in one of two spots. Either it'll be done and you won't need to do anything else, or you might still need human intelligence involved.

If you do still need a human involved, the last step is:

Once you've defined, refined, and automated the system to the greatest extent you can, then it's time to delegate it.

But now you have a tough question: who's the best person to delegate this work to? It might be tempting to hire the lowest cost overseas VA you can, but that often leads to more headaches than it's worth.

Instead you want to find someone who can take the system you started, implement it as you designed it, then continue to improve and refine it. If you just find someone to check off the boxes, then once you step out of the system it will stagnate, so invest in someone who can keep improving what you started. That’s the difference between creating a system that grows without you and one that slowly dies.

What if you can't afford someone to delegate the system to yet?

The first question you should ask yourself is: if someone was doing this work instead of me so I could focus on other things, would I eventually be able to afford them? It's a tough question, but it's also the root of a lot of progress in entrepreneurship. Hiring people slightly before you can afford them so you have the time to focus on getting the revenue from the rest of your systems up to the point where you can. The times I’ve taken one step back financially to take two steps forward have consistently been some of the best decisions I’ve made.

But you also need to ask yourself a tough question: are you avoiding hiring someone to run these systems because you're married to having the income you have right now?

If that's the case that's fine, but that also means you're approaching a local maximum for the business you can build. As soon as you stop delegating yourself out of the systems you’re building, you'll clog up what your time is allocated to, which means you have less and less time for building new systems beyond yourself.

Identifying the things using your mental bandwidth each week, then systematically running them through this process is how you get back the time you need to work on the most important things.

The best question to ask yourself is: could someone else do this thing at least 80% as well as me? If the answer is yes, delegate it.

Keep doing that until you're left with the few core things you need to, and want to, be doing.

The Mental Model Behind Every High-Performer I Know
How to Make Podcast Listening Productive with Audio Highlighting
Roam: Why I Love It and How I Use It
The Procrustean Bed of Productivity
How to Use Notion to Set, Track, and Hit Your Goals

Then consider joining the 25,000 other people getting the Monday Medley newsletter. It's a collection of fascinating finds from my week, usually about psychology, technology, health, philosophy, and whatever else catches my interest. I also include new articles and book notes.