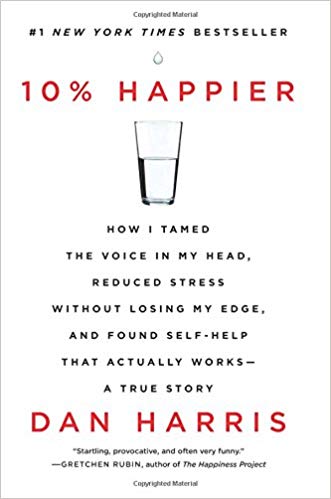 Great participatory journalism exploring the world of modern mindfulness and meditation. If you’re skeptical of the benefits of meditation, especially if you think it’s “too spiritual” or “woo-woo” for you, I highly recommend reading this.

What’s the point of meditation? According to Dan, it makes you “10% happier,” and like any skill, it’s something that can developed through practice. It quiets the voices in your head, makes you appreciate the present more, decreases your anxiety over the past and future, and makes you a better person.

Tolle on the ego: “Our entire lives, he argued, are governed by a voice in our heads. This voice is engaged in a ceaseless stream of thinking— most of it negative, repetitive, and self-referential. It squawks away at us from the minute we open our eyes in the morning until the minute we fall asleep at night, if it allows us to sleep at all. Talk, talk, talk: the voice is constantly judging and labeling everything in its field of vision. Its targets aren’t just external; it often viciously taunts us, too.”

On Mark Epstein: “Epstein totally nailed my habit of hunting around my plate for the next bite before I’d tasted what was in my mouth. As he described it, “I do not want to experience the fading of the flavor— the colorless, cottony pulp that succeeds that spectacular burst over my taste buds.””

“As best I could understand it, the Buddha’s main thesis was that in a world where everything is constantly changing, we suffer because we cling to things that won’t last.”

“My favorite Buddhist catchphrase, however, was the one they used to describe the churning of the ego: “monkey mind.” I’ve always been a sucker for animal metaphors, and I thought this one was perfect. Our minds are like furry little gibbons: always agitated, never at rest.”

“The doctor’s theory was that, in modern life, our ancient fight-or-flight mechanism was being triggered too frequently— in traffic jams, meetings with our bosses, etc.— and that this was contributing to the epidemic of heart disease.”

“The final step—“ non-identification”— meant seeing that just because I was feeling angry or jealous or fearful, that did not render me a permanently angry or jealous person. These were just passing states of mind.”

“What mindfulness does is create some space in your head so you can, as the Buddhists say, “respond” rather than simply “react.” In the Buddhist view, you can’t control what comes up in your head; it all arises out of a mysterious void. We spend a lot of time judging ourselves harshly for feelings that we had no role in summoning. The only thing you can control is how you handle it.”

The Pursuit of Happiness:

““Praise Allah, but also tie your camel to the post.” In other words, it’s good to take a transcendent view of the world, but don’t be a chump.”

“Striving is fine, as long as it’s tempered by the realization that, in an entropic universe, the final outcome is out of your control. If you don’t waste your energy on variables you cannot influence, you can focus much more effectively on those you can. When you are wisely ambitious, you do everything you can to succeed, but you are not attached to the outcome— so that if you fail, you will be maximally resilient, able to get up, dust yourself off, and get back in the fray. That, to use a loaded term, is enlightened self-interest.”