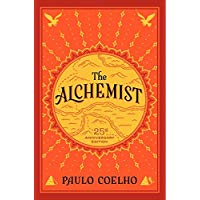 The wonderful thing about a story like The Alchemist is that it’s packed with bits of wisdom you can believe from the story, but also validate through research. Finding meaning in life, spinning bad situations to their positives, learning through action, downsides of fearing failure, perceptions shaping reality, appreciating what you have.

“He owned a jacket, a book that he could trade for another, and a flock of sheep. But, most important, he was able every day to live out his dream. If he were to tire of the Andalusian fields, he could sell his sheep and go to sea. By the time he had had enough of the sea, he would already have known other cities, other women, and other chances to be happy. I couldn’t have found God in the seminary, he thought, as he looked at the sunrise.”

“It’s the possibility of having a dream come true that makes life interesting, he thought, as he looked again at the position of the sun, and hurried his pace.”

“Everyone seems to have a clear idea of how other people should lead their lives, but none about his or her own.”

“It’s what you have always wanted to accomplish. Everyone, when they are young, knows what their Personal Legend is.”

“And, when you want something, all the universe conspires in helping you to achieve it.”

“When he was a child, that man wanted to travel, too. But he decided first to buy his bakery and put some money aside. When he’s an old man, he’s going to spend a month in Africa. He never realized that people are capable, at any time in their lives, of doing what they dream of.”

“This wasn’t a strange place; it was a new one.”

“As he mused about these things, he realized that he had to choose between thinking of himself as the poor victim of a thief and as an adventurer in quest of his treasure.”

“I’m afraid that if my dream is realized, I’ll have no reason to go on living.”

“Yet the boy felt that there was another way to regard his situation: he was actually two hours closer to his treasure . . . the fact that the two hours had stretched into an entire year didn’t matter.”

“Now, I’m beginning what I could have started ten years ago. But I’m happy at least that I didn’t wait twenty years.”

“Don’t say anything,” Fatima interrupted. “One is loved because one is loved. No reason is needed for loving.”

“There is only one way to learn,” the alchemist answered. “It’s through action. Everything you need to know you have learned through your journey.”

“You don’t even have to understand the desert: all you have to do is contemplate a simple grain of sand, and you will see in it all the marvels of creation.”

“There is only one thing that makes a dream impossible to achieve: the fear of failure.”

“That’s what alchemists do. They show that, when we strive to become better than we are, everything around us becomes better, too.”