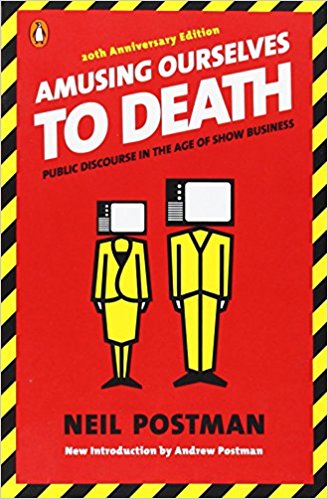 Everyone needs to read this book. The observations were made in a pre-internet era, and they’re 10x as relevant today. Nothing will do more to help cure your information addiction that the healthy dose of reality provided in these pages.

The Medium is the Metaphor

Throughout history, different cities have been the representations of American culture. To Postman, that city is now Las Vegas.

The shape of someone’s body doesn’t matter when they’re sharing ideas in writing, radio, or smoke signals, but it matters greatly in television.

The idea there is “news of the idea” was created by the telegraph, which first made it possible to move decontextualized information over great distances at great speed. But “news of the day” is a figment of our imagination, it exists only because of communication speeds.

Religion saw how giving an image to an idea or set of ideas was problematic, thus the prohibition against it in the ten commandments. The medium matters, it changes the message.

Every new medium of communication changes communication, whether that’s painting or hieroglyphs or the alphabet or television. Each medium creates a new orientation for thought, expression, and sensibility.

This applies beyond communication, the clock created the idea of “moment to moment” by quantifying time into minutes and seconds.

Plato wrote that with the invention of the alphabet, there would be a shift from the ear to the eye as the tool for language processing. And that it would finalize thoughts, make them written in stone, instead of being more fluid as they are in speech.

Postman has no problem with the junk on TV, rather that’s the best part of TV. The problem is when entertainment masquerades as important and informative media.

In oral cultures, parables and proverbs were necessary tools for codifying and remembering ancient wisdom and ideas. They were easily transferrable and laid the foundation for thought itself.

Major new mediums change the structure of discourse. Books demand that you sit still and pay attention for long periods. Television’s demands on you are much different.

Television pollutes public communication and its related discourse, it should only be considered a source of entertainment.

One problem with writing: once it’s put in words and recorded, you feel bound to it, it becomes harder to adjust your ideas later.

Literacy was extremely high in the US colonies, some of the highest in the world.

In the 1830s, “pamphlets” were popular and used to spread ideas and news and gossip, since they were more ephemeral than books, but they also became irrelevant much faster.

It’s hard to say nothing with a written english sentence, but a spoken one says nothing all the time.

In a pre-television word, the name of a famous person would bring ideas to mind. But in post television world, it brings a face to mind. What do you think of when you hear Clinton, Nixon, Elvis, probably first their face.

Pre-telegraph, information could only move as fast as a train, or about 35mph. There was little relation between states, even cities.

But then the telegraph came along and made the country into one neighborhood, but a neighborhood where everyone is still strangers with some superficial facts about each other.

Context-free information: How often does the information that you get in the morning radio, television, or newspaper, make you alter your plans for the day? Or give you anything useful besides something to talk about? When the telegraph came along and made information transmission fast and cheap, it multiplied the information we had available to us, and created a significantly higher noise:signal ratio.

“What steps do you plan to take to reduce the conflict in the Middle East? Or the rates of inflation, crime and unemployment? What are your plans for preserving the environment or reducing the risk of nuclear war? What do you plan to do about NATO, OPEC, the CIA, affirmative action, and the monstrous treatment of the Baha’is in Iran? I shall take the liberty of answering for you: You plan to do nothing about them.”

Burning a book is seen as a vile form of anti-intellectualism, but the telegraph demands that it’s contents be burned, it is not meant to last.

Adding visual context to meaningless information gives it the illusion of relevancy, but the image does nothing to make it valuable. Ilyx example. It’s still trivia for cocktail parties.

“Where people once sought information to manage the real contexts of their lives, now they had to invent contexts in which otherwise useless information might be put to some apparent use.” Crosswords, trivial pursuit, jeopardy, cocktail parties.

Pseudo-context: a structure invented to give fragmented, irrelevant information a seeming use. But its only value ends up being as entertainment.

The Peek-a-Boo World: All of these electronic advances created this world where now this event, now that, pops into existence and vanishes again. A world without coherence or sense, but one which is endlessly entertaining.

Questions about how television shapes our culture have disappeared as television has become our culture. We rarely talk about television, rather what is ontelevision.

The Age of Show Business

The average length of a shot on network television is only 3.5 seconds, so that your eye never rests and always has something new to see.

The problem isn’t that television presents us with entertaining subjects, rather that all subjects are presented as entertaining.

“Now… this” is commonly used to indicate that what one has just heard or seen has no relevance to what they’re about to hear or see. It acknowledges that in this speed-up electronic media world, almost everything being reported has no context and no meaning.

What does music have to do with the news? Why is it there? To entertain, to create a mood.

The average length of a news story is only 45 seconds, but it’s not possible to convey the whole depth of an important story in such short a time. It’s meant to entertain, to be trivial.

You can learn about an event, but rarely about the underlying more important details. How many people actually know anything about North Korea, or Islam, or other subjects being reported on beyond the specific events being discussed?

Much of television “informing” us is disinformation. Information that’s misleading, that creates the illusion of knowing something, but which in fact leads one away from knowing. When the news is packaged as entertainment, it’s the inevitable result. It gets trivialized.

Television is the soma of Brave New World.

Television has even influenced other media. USA Today is modeled on the television style, short stories that are highly visual, put in street receptacles that look like television sets.

Reach Out and Elect Someone

The television quickly became the primary way of presenting political ideas. First, by requiring that it be used in political campaigns. Second, by being forced to package ideas into television commercials in order to get them in front of people.

We no longer learn who is best at being president or governor or other leader, rather, who has the best image via television.

A student’s freedom to read is not seriously impacted by someone burning a book on Long Island. But television does impair our ability to read, by shortening our attention spans and accomodating us to constant entertainment. Television doesn’t burn books, it displaces them.

Teaching as an Amusing Activity

According to Cicero the goal of education was to free the student from the “tyranny of the present,” give them a greater historical context. But television aims to accomodate us to the present.

A perplexed learner will change to another station. This means that there must be nothing that has to be remembered, studied, applied, or endured.

51% of viewers cannot recall a single item of news a few minutes after viewing a news program on television, and we can only retain 20% of the information in a fictional televised news story. 21% can’t remember any items within one hour of broadcast.

Only through a deep and unfailing awareness of the structure and effects of information, through demystifying meda, is there any hope of gaining some measure of control over television, the computer, or any other medium.

“For in the end, he was trying to tell us that what afflicted the people in Brave New World was not that they were all laughing instead of thinking, but that they didn’t know what they were laughing about and why they had stopped thinking.”

The Inevitable by Kevin Kelly

The Sovereign Individual by Davidson and Rees-Mogg