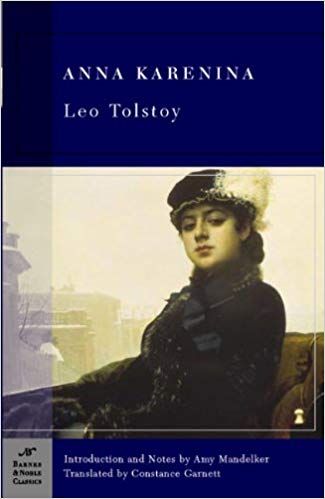 This was another one I had a hard time getting into, I think because I didn’t particularly like any of the characters. Except Levin. Levin was great.

“There was no solution, but that universal solution which life gives to all questions, even the most complex and insoluble. That answer is: one must live in the needs of the day— that is, forget oneself.”

“It seemed to each of them that the life he led himself was the only real life, and the life led by his friend was a mere phantasm.”

“He knew she was there by the rapture and the terror that seized on his heart. She was standing talking to a lady at the opposite end of the ground. There was apparently nothing striking either in her dress or her attitude. But for Levin she was as easy to find in that crowd as a rose among nettles.”

“He walked down, for a long while avoiding looking at her as at the sun, but seeing her, as one does the sun, without looking.”

“”But that’s just the aim of civilization— to make everything a source of enjoyment.””

“”Perhaps because I rejoice in what I have, and don’t fret for what I haven’t,” said Levin, thinking of Kitty.”

“No. Some mathematician has said that enjoyment lies in the search for truth, not in the finding it.”

“”I imagine,” he said, “that no sort of activity is likely to be lasting if it is not founded on self-interest, that’s a universal principle, a philosophical principle,” he said, repeating the word “philosophical” with determination, as though wishing to show that he had as much right as any one else to talk of philosophy.”

“Another row, and yet another row, followed— long rows and short rows, with good grass and with poor grass. Levin lost all sense of time, and could not have told whether it was late or early now. A change began to come over his work, which gave him immense satisfaction. In the midst of his toil there were moments during which he forgot what he was doing, and it came all easy to him, and at those same moments his row was almost as smooth and well cut as Tit’s. But so soon as he recollected what he was doing, and began trying to do better, he was at once conscious of all the difficulty of his task, and the row was badly mown.”

“The longer Levin mowed, the oftener he felt the moments of unconsciousness in which it seemed not his hands that swung the scythe, but the scythe mowing of itself, a body full of life and consciousness of its own, and as though by magic, without thinking of it, the work turned out regular and well-finished of itself. These were the most blissful moments.”

“He felt no weariness; all he wanted was to get his work done more and more quickly and as much done as possible.”

“He sat on his bed in the darkness, crouched up, hugging his knees, and holding his breath from the strain of thought, he pondered. But the more intensely he thought, the clearer it became to him that it was indubitably so, that in reality, looking upon life, he had forgotten one little fact— that death will come, and all ends; that nothing was even worth beginning, and that there was no helping it anyway. Yes, it was awful, but it was so.”

“Levin had often noticed in discussions between the most intelligent people that after enormous efforts, and an enormous expenditure of logical subtleties and words, the disputants finally arrived at being aware that what they had so long been struggling to prove to one another had long ago, from the beginning of the argument, been known to both, but that they liked different things, and would not define what they liked for fear of its being attacked.”

The Celestine Prophecy by James Redfield