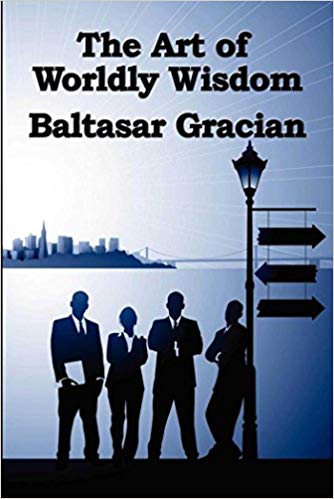 A lovely book of aphoristic wisdom. You’ll find different parts speak to you on each readthrough. It echoes of the stoics.

This book is between aphorisms and narrative, but since it’s mostly aphoristic, I’m focusing primarily on quotations I liked.

“Mix a little mystery with everything, and the very mystery arouses veneration. And when you explain, be not too explicit, just as you do not expose your inmost thoughts in ordinary intercourse. Cautious silence is the holy of holies of worldly wisdom. A resolution declared is never highly thought of; it only leaves room for criticism.”

“The wise man would rather see men needing him than thanking him. To keep them on the threshold of hope is diplomatic, to trust to their gratitude boorish; hope has a good memory, gratitude a bad one.”

“Sensible persons thus enjoy alternating pleasures: they reap applause for what they say, and gain instruction from what they hear. We are always attracted to others by our own interest, but in this case it is of a higher kind.”

“Mediocrity obtains more with application than superiority without it. Work is the price which is paid for reputation. What costs little is little worth.”

“The real can never equal the imagined, for it is easy to form ideals but very difficult to realise them.”

“There are likewise patches on our reputation which ill-will soon finds out and is continually noticing. The highest skill is to transform them into ornament.” (If you can’t hide it, flaunt it)

“To be occupied in what does not concern you is worse than doing nothing.”

“Know your strongest point, your pre-eminent gift; cultivate that and you will assist the rest. Every one would have excelled in something if he had known his strong point.”

“First be master over yourself if you would be master over others. You must pass through the circumference of time before arriving at the centre of opportunity.”

“Quickly done can be quickly undone. To last an eternity requires an eternity of preparation.”

“Let there be no unnecessary expenditure either of knowledge or of power. The skilful falconer only flies enough birds to serve for the chase.”

“One ought not to give way in everything nor to everybody. To know how to refuse is therefore as important as to know how to consent.”

“There are exemplars of greatness, living texts of honour. Let every one have before his mind the chief of his calling not so much to follow him as to spur himself on.”

“Try therefore to be born again in valour, in genius, in fortune, in all. Display startling novelties, rise afresh like the sun every day.”

“Be extraordinary in your excellence, if you like, but be ordinary in your display of it. The more light a torch gives, the more it burns away and the nearer ‘tis to going out. Show yourself less and you will be rewarded by being esteemed more.”

“It is far easier to prevent than to rectify.”

“Man is born a barbarian, and only raises himself above the beast by culture.”

“You cannot master yourself unless you know yourself. There are mirrors for the face but none for the mind.”

“Do not rest your whole fortune on a single cast of the die. It requires great skill to moderate your forces so as to keep expectation from being dissipated.”

“If you wish to be valued, be valued for your talents, not for anything adventitious. Even kings prefer to be honoured for their personal qualifications rather than for their station.”

“It is both wiser and easier to collect winter stores in summer.”

“Therefore pay respect that you may be respected, and know that to be esteemed you must show esteem.”

“Think more highly of what fate has given you than of what it has denied.”

“It is preposterous to take to heart that which you should throw over your shoulders.”

“To complain always brings discredit. Better be a model of self-reliance opposed to the passion of others than an object of their compassion.”

“Post Yourself in the Centre of Things. So you feel the pulse of affairs. Many lose their way either in the ramifications of useless discussion or in the brushwood of wearisome verbosity without ever realising the real matter at issue.”

“Remedies often make diseases worse: in such cases one has to leave them to their natural course and the moral suasion of time.”

“A fountain gets muddy with but little stirring up, and does not get clear by our meddling with it but by our leaving it alone. The best remedy for disturbances is to let them run their course, for so they quiet down.”

“But many have such a scent that amid a thousand excellences they fix upon a single defect, and single it out for blame as if they were scavengers of men’s minds and hearts.”

“A friend must be free to advise, and even to upbraid, without feeling embarrassed.”

“All rush after the unusual, which is more appetising both for the taste and for the intelligence.”

“We must not put off thought till we are up to the chin in mire. Mature reflection can get over the most formidable difficulty. The pillow is a silent Sibyl, and it is better to sleep on things beforehand than lie awake about them afterwards.”

“When you are on the way to fortune associate with the eminent; when arrived, with the mediocre.”

“Maturity of mind is best shown in slow belief.”

“To keep control of passion one must hold firm the reins of attention: he who can do so will be the first man “wise on horseback,” and probably the last.”

“Yet a man is judged by his friends, for there was never agreement between wise men and fools.”

“Many finish their fortune sooner than their life: they run through pleasures without enjoying them, and would like to go back when they find they have over-leaped the mark.”

“Be slow in enjoyment, quick at work, for men see work ended with pleasure, pleasure ended with regret.”

“There is none who cannot teach somebody something, and there is none so excellent but he is excelled.”

“Leave Something to wish for, so as not to be miserable from very happiness.”

“Though all the world is full of fools, there is none that thinks himself one, or even suspects the fact.”

“It is a fixed rule with the wise never to defend themselves with the pen. For such defence always leaves a stain, and does more to glorify one’s opponent than to punish his offence.”

“A moment of wrath or of pleasure carries you on farther than many hours of calm, and often a short diversion may put a whole life to shame.”

“Much thought is needed to prevent a passion taking the bit in the teeth, and he is doubly wise who is wise on horseback.”

“Also in learning it is a subtle plan of the pupil to contradict the master, who thereupon takes pains to explain the truth more thoroughly and with more force, so that a moderate contradiction produces complete instruction.”

“Many things cause pain which would cause pleasure if you regarded their advantages.”

“Do not be witty at the cost of others: it is easy but hateful. All men have their revenge on such an one by speaking ill of him, and as they are many and he but one, he is more likely to be overcome than they convinced.”

“Others desire to charm by their conversation, and only succeed in boring by their loquacity.”

“Many break the mirror that reminds them of their ugliness.”

“Some put all their strength in the commencement and never carry a thing to a conclusion. They invent but never execute. These be paltering spirits. They obtain no fame, for they sustain no game to the end. Everything stops at a single stop.”

“Nothing really belongs to us but time, which even he has who has nothing else.”

“Others wish to triumph before they have fought. Others again begin with learning things of little consequence and leave studies that would bring them fame and gain to the end of life.”

“Many have proved themselves able at once when they had to deal with a difficulty, just as fear of drowning makes a swimmer of a man,”

“The Wise do at once what the Fool does at last.”

“If you cannot find the good in a thing, hide your incapacity and do not damn it straightway. As a general rule bad taste springs from want of knowledge.”

“One may lose more on a day of pleasure than has been gained during a whole life of labour.”

“The tepid Yes of a remarkable man is worth more than all the applause of the vulgar: you cannot make a meal off the smoke of chaff.”

“Respect yourself if you would have others respect you.”

“There is great caution needed in helping the drowning without danger to oneself.”