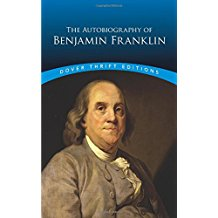 Good history of Franklin’s life, but I found it kind of hard to get through at times, likely from the older language. Still worth a read, though, especially for some of his thinking around self-improvement. Also, I never realized how old he was during the revolution!

Franklin’s process for improving his writing:

He took old copies of The Spectator, found sections he liked, and wrote down hints to what they were saying.Then, after a few days, he tried recreating those sections in his own language based on the hints.First, he realized that his word choice could be better, so he forced himself to turn the sentiments into poetry to stretch his vocabulary.Then, he tried mixing up the order of his hints, to see how he thought about and could improve his structure.

“So convenient a thing is it to be a reasonable creature, since it enables one to find or make a reason for everything one has a mind to do.”

“I should have mentioned before, that, in the autumn of the preceding year, I had form’d most of my ingenious acquaintance into a club of mutual improvement, which was called the Junto; 54 we met on Friday evenings. The rules that I drew up required that every member, in his turn, should produce one or more queries on any point of Morals, Politics, or Natural Philosophy, to be discuss’d by the company; and once in three months produce and read an essay of his own writing, on any subject he pleased. Our debates were to be under the direction of a president, and to be conducted in the sincere spirit of inquiry after truth, without fondness for dispute, or desire of victory; and, to prevent warmth, all expressions of positiveness in opinions, or direct contradiction, were after some time made contraband, and prohibited under small pecuniary penalties.”

Temperance: Eat not to dullness; drink not to elevation.Silence: Speak not but what may benefit others or yourself; avoid trifling conversation.Order: Let all your things have their places; let each part of your business have its time.Resolution: Resolve to perform what you ought; perform without fail what you resolve.Frugality: Make no expense but to do good to others or yourself; i. e., waste nothing.Industry: Lose no time; be always employ’d in something useful; cut off all unnecessary actions.Sincerity: Use no hurtful deceit; think innocently and justly; and, if you speak, speak accordingly.Justice: Wrong none by doing injuries, or omitting the benefits that are your duty.Moderation: Avoid extreams; forbear resenting injuries so much as you think they deserve.Cleanliness: Tolerate no uncleanliness in body, cloaths, or habitation.Tranquillity: Be not disturbed at trifles, or at accidents common or unavoidable.Chastity.Humility: Imitate Jesus and Socrates.

“Having heard that he had in his library a certain very scarce and curious book, I wrote a note to him, expressing my desire of perusing that book, and requesting he would do me the favour of lending it to me for a few days. He sent it immediately, and I return’d it in about a week with another note, expressing strongly my sense of the favour. When we next met in the House, he spoke to me (which he had never done before), and with great civility; and he ever after manifested a readiness to serve me on all occasions, so that we became great friends, and our friendship continued to his death. This is another instance of the truth of an old maxim I had learned, which says, “He that has once done you a kindness will be more ready to do you another, than he whom you yourself have obliged.””

“I experienced, too, the truth of the observation, ”that after getting the first hundred pound, it is more easy to get the second,” money itself being of a prolific nature.”

Can't Hurt Me by David Goggins