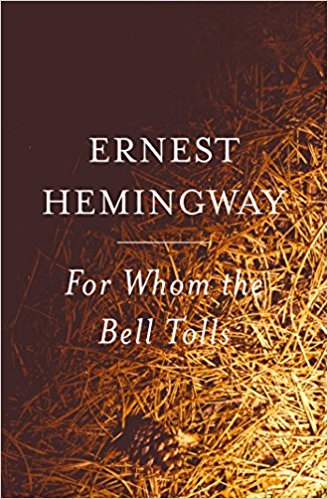 I had a hard time getting into this, I know it’s a “great book,” but it didn’t grip me. Not sure why not. The ending is exciting though.

“Now as they lay all that before had been shielded was unshielded. Where there had been roughness of fabric all was smooth with a smoothness and firm rounded pressing and a long warm coolness, cool outside and warm within, long and light and closely holding, closely held, lonely, hollow-making with contours, happy-making, young and loving and now all warmly smooth with a hollowing, chest-aching, tight-held loneliness that was such that Robert Jordan felt he could not stand it and he said, “Hast thou loved others?””

“From it, from the palm of her hand against the palm of his, from their fingers locked together, and from her wrist across his wrist something came from her hand, her fingers and her wrist to his that was as fresh as the first light air that moving toward you over the sea barely wrinkles the glassy surface of a calm, as light as a feather moved across one’s lip, or a leaf falling when there is no breeze; so light that it could be felt with the touch of their fingers alone, but that was so strengthened, so intensified, and made so urgent, so aching and so strong by the hard pressure of their fingers and the close pressed palm and wrist, that it was as though a current moved up his arm and filled his whole body with an aching hollowness of wanting.”

“But should a man carry out impossible orders knowing what they lead to? Even though they come from Golz, who is the party as well as the army? Yes. He should carry them out because it is only in the performing of them that they can prove to be impossible. How do you know they are impossible until you have tried them? If every one said orders were impossible to carry out when they were received where would you be? Where would we all be if you just said, “Impossible,” when orders came?”

The Martian by Andy Weir