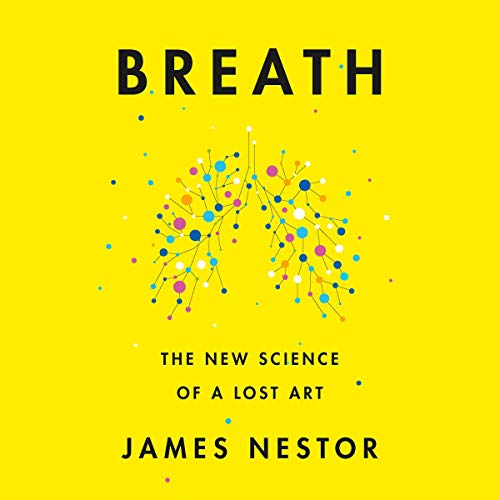 The most important highlights and takeaways from the book Breath by James Nestor.

Mouthbreathing was also making me dumber. A recent Japanese study showed that rats who had their nostrils obstructed and were forced to breathe through their mouths developed fewer brain cells and took twice as long to make their way through a maze than nasal-breathing controls. (Page 30)

There are dozens of alternate nostril breathing techniques. I've started with the most basic. It involves placing an index finger over the left nostrìl and then inhaling and exhaling only through the right. I did this two dozen times after each meal today, to heat up my body and aid my digestion. Before meals, and any other time I wanted to relax, l'd switch sides, repeating the same exercise with my left nostril open. To gain focus and balance the body and mind, I followed a technique called surya bheda pranayama, which involves taking one breath into the right nostril, then exhaling through the left for several rounds. (Page 43)

At night, they'd stand over sleeping infants and gently pinch mouths shut if they opened. Some Plains tribes strapped infants to a straight board and placed a pillow beneath their heads, creating a posture that made it much harder to breathe through the mouth.  During winter, infants would be wrapped in light clothing and then held at arm's length on warmer days so they'd be less prone to get too hot and begin panting. (Page 48)

Dr. Mark Burhenne... told me that mouthbreathing contributed to periodontal disease and bad breath, and was the number one cause of cavities, even more damaging than sugar consumption, bad diet, or poor hygiene. (Page 49)

In the 1980s, researchers with the Framingham Study, a 70-year longitudinal research program focused on heart disease, attempted to find out if lung size really did correlate to longevity. They gathered two decades of data from 5,200 subjects, crunched the numbers, and discovered that the greatest indicator of life span wasn't genetics, diet, or the amount of daily exercise, as many had suspected. It was lung capacity. (Page 54)

At age 16, Schroth began training herself in something called "orthopedic breathing." She would stand in front of a mirror, twist her body, and inhale into one lung while limiting air intake to the other. Then she'd hobble over to a table, sling her body on its side, and arch her chest back and forth to loosen her rib cage while breathing into the empty space. Schroth spent five years doing this. At the end, shed effectively cured herself of “incurable" scoliosis; she'd breathed her spine straight again. (Page 57)

I searched through the current treatments for the nearly 4 million Americans now suffering from emphysema. There were bronchodilators, steroids, and antibiotics. There was supplemental oxygen and surgery and something called pulmonary rehabilitation, which included assistance to quit smoking, exercise planning, nutrition counseling, and some pursed-lip breathing techniques. But there was no mention of Stough, or the "second heart" of the diaphragm, or the importance of a full exhalation. No mention of how expanding the lungs and breathing properly had effectively reversed the disease or lengthened lives. Emphysema was still listed as an incurable condition. (Page 68)‍

For every ten pounds of fat lost in our bodies, eight and a half pounds of it comes out through the lungs; most of it is carbon dioxide mixed with a bit of water vapor. The rest is sweated or urinated out. This is a fact that most doctors, nutritionists, and other medical professionals have historically gotten wrong. The lungs are the weight-regulating system of the body. (Page 75)

For a healthy body, overbreathing or inhaling pure oxygen would have no benefit, no effect on oxygen delivery to our tissues and organs, and could actually create a state of oxygen deficiency, leading to relative suffocation. In other words, the pure oxygen a quarterback might huff between plays, or that a jet-lagged traveler might shell out 50 dollars for at an airport "oxygen bar," are of no bienefit. Inhaling the gas might increase blood oxygen levels one or two percent, but that -Кхо gen will never make it into our hungry cells. We'll simply breathe it back out. (Page 77)

As I cranked the pedals harder and faster, I forced myself to breathe softer and slower. This felt stifling and claustrophobic, like I was starving my body of fuel, until I checked the pulse oximeter. Once again, no matter how slowly I breathed or how hard I pedaled, my oxygen levels held steady at 97 percent. (Page 81)

I realized then that breathing was like rowing a boat: taking a zillion short and stilted strokes will get you where you're going, but they pale in comparison to the efficiency and speed of fewer, longer strokes. (Page 81)

Zátopek developed his own training methods to give himself an edge. Hed run as fast as he could holding his breath, take a few huffs and puffs and then do it all again. It was an extreme version of Buteyko's methods, but Zátopek didn't call it Voluntary Elimination of Deep Breathing. Nobody did. It would become known as hypoventilation training. Hypo, which comes from the Greek for "under" (as in hypodermic needle), is the opposite of hyper, meaning "over." The concept of hypoventilation training was to breathe less.  Over the years, Zátopek's approach was widely derided and mocked, but he ignored the critics. At the 1952 Olympics, he won gold in the 5,000 and 10,000 meters. On the heels of his success, he decided to compete in the marathon, an event he had neither trained for nor run in his life. He won gold. Zátopek would claim 18 world records, four Olympic golds and a silver over his career. He would later be named the "Greatest Runner of All Time" by Runner's World magazine. (Page 94)

They discovered that the optimum amount of air we should take in at rest per minute is 5.5 liters. The optimum breathing rate is about 5.5 breaths per minute. That's 5.5-second inhales and 5.5-second exhales. This is the perfect breath. (Page 104)

Tummo heated the body and opened up the brain's pharmacy, flooding the bloodstream with self-produced opioids, dopamine, and serotonin. All that, with just a few hundred quick and heavy breaths. (Page 153)

Men, mainly in their 20s, who'd suddenly been diagnosed with arthritis and psoriasis or depression, who, weeks after practicing heavy breathing, no longer suffered any symptoms.  Twenty thousand others in Hof's community exchange blood work data and other metrics of their transformations online. The before-and-after results confirmed their claims. Some of these people were reducing inflammatory markers (C-reactive protein) 40-fold within just a few weeks. (Page 155)

To practice Wim Hof's breathing method, start by finding a quiet place and lying flat on your back with a pillow under your head. Relax the shoulders, chest, and legs. Take a very deep breath into the pit of your stomach and let it back out just as quickly. Keep breathing this way for 30 cycles. If possíble, breathe through the nose; if the nose feels obstructed, try pursed lips.

Each breath should look like a wave, with the inhale inflating the stomach, then the chest. You should exhale all the air out in the same order.  At the end of 30 breaths, exhale to the natural conclusion, leaving about a quarter of the air left in the lungs, then hold that breath for as long as possible. Once you've reached your breathhold limit, take one huge inhale and hold it another 15 seconds. Very gently, move that fresh breath of air around the chest and to the shoulders, then exhale and start the heavy breathing again.

Repeat the whole pattern three or four rounds and add in some cold exposure (cold shower, ice bath, naked snow angels) a few times a week.  This flip-flopping-breathing all-out, then not at all, getting really cold and then hot again-is the key to Tummo's magic. It forces the body into high stress one minute, a state of extreme relaxation the next. Carbon dioxide levels in the blood crash, then they build back up. Tissues become oxygen deficient and then flooded again. The body becomes more adaptable and flexíble and learns that all these physiological responses can come under our control. (Page 156)‍

Up to 80 percent of office workers (according to one estimate) suffer from something called continuous partial attention. We'll scan our email, write something down, check Twitter, and do it all over again, never really focusing on any specific task. In this state of perpetual distraction, breathing becomes shallow and erratic. Sometimes we won't breathe at all for a half minute or longer. The problem is serious enough that the National Institutes of Health has enlisted several researchers, including Dr. David Anderson and Dr. Margaret Chesney, to study its effects over the past decades. Chesney told me that the habit, also known as "email apnea," can contribute to the same maladies as sleep apnea. (Page 172)

Meuret crunched the data and found that panic, like asthma, is usually preceded by an increase in breathing volume and rate and a decrease in carbon dioxide. To stop the attack before it struck, subjects breathed slower and less, increasing their carbon dioxide. (Page 177)‍

"Take a deep breath' is not a helpful instruction," Meuret wrote. Hold your breath is much better. (Page 178)

Szent-Györgyi was talking about sicknesses of our own making, or, as anthropologist Robert Corruccini has called them, "diseases of civilization." Nine out of ten of the top killers, such as diabetes, heart disease, CC and stroke are caused by the food we eat, water we drink, houses we live in, and offices we work in. They are diseases humanity created. (Page 205)

The human body has evolved to be able to breathe through two channels for a reason. It increases our chances of survival. Should the nose get obstructed, the mouth becomes a backup ventilation system.  The few gasping breaths Stephen Curry takes before dunking a basketball, or a sick kid huffs when he has a fever, or you take in when you're laughing with your friends-this temporary mouthbreathing will have no long-term effects on health.  Chronic mouthbreathing is different. The body is not designed to process raw air for hours at a time, day or night. There is nothing normal about it. (Page 207)

As basic as this sounds, full exhalations are seldom practiced. Most of us engage only a small fraction of our total lung capacity with each breath, requiring us to do more and get less. One of the first steps in healthy breathing is to extend these breaths, to move the diaphragm up and down a bit more, and to get air out of us before taking a new one in. (Page 209)

The bones in the human face don't stop growing in our 20s, unlike other bones in the body. They can expand and remodel into our 70s, and likely beyond. Which means we can influence the size and shape of our mouths and improve our ability to breathe at virtually any age. (Page 210)‍

Willing yourself to breathe heavily for a short, intense time, however, can be profoundly therapeutic. "It's only through disruption that we can be normal again," McGee told me. That's what techniques like Tummo, CC Sudarshan Kriya, and vigorous pranayamas do. They stress the body on purpose, snapping it out of its funk so that it can properly function during the other 23½ hours a day. Conscious heavy breathing teaches us to be the pilots of our autonomic nervous systems and our bodies, not the passengers. (Page 210)‍