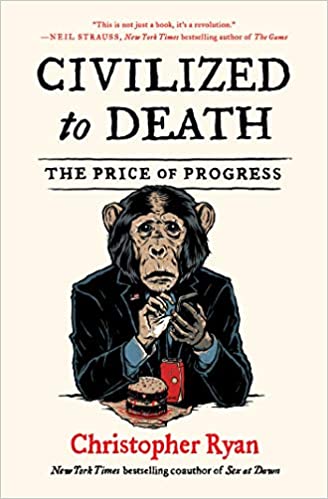 A fine book on the decline of quality of life as a result of civilization, felt a little heavy handed at times though and I felt like I already knew most of it.

If everything's so amazing, why are so many of us so profoundly unhappy? (Page 9)

Around 56 million people died in South, Central, and North America in the hundred years following first contact with Europeans. So many were lost, in fact, that the ecological changes caused by their sudden absence may well have triggered the so-called Little Ice Age experienced in Europe in the early 1600s. (Page 55)

"Civilized" people whether Aztecs or Australians-have always believed that they are better than so-called savages. In fact, while there are thousands of recorded cases of people from civilized communities fleeing to "go native," there are few documented cases of native people willingly choosing to join civilization when they had any other viable options. A truly superior social system would have no need to forcibly recruit new members, but the history of civilization is, as we'll see, replete with systems that enforce participation. (Page 58)

This insatiable hunger for human labor also helps explain why most major religions so insistently and violently oppose nonreproductive sexual behavior-a major source of human suffering in civilized societies. Despite these prohibitions, nonreproductive sex can practically be considered a defining human characteristic. (Page 62)

Seen as a way of compelling rapid population growth in order to fuel the growth of civilized populations, this otherwise bizarre prohibition of nonreproductive sex begins to make sense. Humans are in effect being bred as a source of cheap, disposable labor, like horses, oxen, or camels. (Page 62)

In the 1930s, an American dentist named Weston Price studied tribal people around the world to understand what conditions contributed to dental health. Price's travels took him to Alaska, the Canadian Yukon, Hudson Bay, Vancouver Island, Florida, the Andes, the Amazon, Samoa, Tahiti, New Zealand, Australia, New Caledonia, Fiji, the Torres Strait, East Africa, and the Nile. Wherever he went, Price found the same thing: If people were still eating their traditional diet, their teeth were perfect. But where they'd already begun the transition to a "modern" diet, cavities, missing teeth, and other abnormalities were common. The new diet brought with it reduced resistance to other diseases due to chronic oral infections that weakened the immune system, as well as "crowded, misplaced teeth, gum diseases, distortion of the face, and pinching of the nasal cavity." (Page 107)

The rats with lives worth living had little interest in the escapism the drugs offered. Overall, they consumed less than a quarter of the drugged water the isolated rats did. None overdosed or ignored food until they starved. These studies strongly suggest that addiction may have more to do with traumatic experiences and environment than with the magical qualities of substances. (Page 125)

Dr. Dominguez-Bello has applied these insights to follow-up studies in Puerto Rico and at NYU, where babies delivered by C-section receive swabs of their mother's vaginal fluids on their lips, face, chest, arms, legs, back, genitals, and anal region. While the bacterial colonies of these babies were still not as rich as those of infants who'd been born vaginally, they were far more closely aligned with their mothers' than were those of C-section babies who hadn't received any vaginal fluids. Studies like these are still in the early stages, but their importance is hard to overstate. Babies delivered surgically appear to be at higher risk of developing various immune and metabolic disorders, including type 1 diabetes, allergies, asthma, and obesity. (Page 132)

Psychologist Darcia Narvaez, who studies the moral development of children, has identified six characteristics of child rearing that she believes to be essentially human:

1. Plenty of positive touch in the form of carrying, cuddling, and holding-but no hitting or spanking;

Quick response to a baby's cries: "Warm, responsive caregiving [that] keeps the infant's brain calm in the years it is forming its personality and response to the world";

2. Anywhere from two to five years of breast-feeding;

4. Natural childbirth, which provides the mother with hormonal surges that appear to be protective against postpartum depression and provides the child with immediate and lasting immunological advantages, as explained earlier. (Page 137)

Louv reported that "each hour of TV watched per day by preschoolers increases by 10 percent the likelihood that they will develop concentration problems and other symptoms of attention-deficit disorders by age seven." (Page 142)

A 2003 study found that two-thirds of Dutch kids from fifteen to seventeen were allowed to have their girlfriend or boyfriend spend the night with them, in their bedrooms at home. (Page 157)

When anthropologists Alice Schlegel and Herbert Barry III reviewed research on teens in the 186 preindustrial societies for which data were available, they found that more than half these cultures didn't even have a word for "adolescence." Teens in these cultures showed almost no signs of psychopathology, and antisocial behavior among young males was completely absent in more than half the cultures and extremely mild in the rest. An associated study found that problems tied to teen rage didn't begin to appear until shortly after the introduction of Western influences, especially schooling and media. (Page 158)

In his 2007 essay in Scientific American, "The Myth of the Teen Brain," psychologist Robert Epstein argues that “the turmoil we see among teens in the U.S. is the result of...'artificial extension of childhood' past puberty. Over the past century," he points out, "we have increasingly infantilized our young, treating older and older people as children while also isolating them from adults." After looking at laws and regulations restricting teenagers' behavior, Epstein found that "teens in the U.S. are subject to more than 10 times as many restrictions as are mainstream adults, twice as many restrictions as active-duty U.S. Marines, and even twice as many restrictions as incarcerated felons." Additional research conducted by Epstein and Diane Dumas demonstrated a significant link between “the extent to which teens are infantilized and the extent to which they display signs of psychopathology.... There is no question that teen turbulence is not inevitable," Epstein concludes. "It is a creation of modern culture, pure and simple-and so, it would appear, is the brain of the troubled teen." (Page 159)

Gray has identified four main reasons to conclude that the daily activities necessary to a forager's survival are more accurately seen as play than as work:

1. It is varied and requires skill and intelligence, leading to the satisfaction of being good at something that requires our full attention. "The [foragers'] abilities include physical skills, honed by years of practice, as well as the capacity to remember, use, add to, and modify an enormous store of culturally shared verbal knowledge."

2. There is not too much of it. Anthropologists in various parts of the world have determined that foragers rarely "work" more than a few hours per day.

3. It is done in a group of friends. In most ecological contexts, hunting parties consist of at least a few men, and women almost always hunt and gather in groups. Anthropologist Alf Wannenburgh described gathering expeditions with the !Kung San as "jolly events," often having "something of the atmosphere of a picnic outing with children."

4. It is, for any given person at any given time, optional. This is the most important aspect determining the "playfulness" of the hunter-gatherer existence, as it is the sense of choice that ultimately determines whether something is work or L play. Crucially, foragers have found a way to get things done while maximizing every participant's sense of being free to join or not. (Page 164)

I know, you think you'd buy a cozy cottage and chillax if you had a million dollars in the bank, but would you really? Once you had that million, you'd no longer be the person you are today. You'd have a different group of friends-many of whom had a lot more than a million dollars tucked away. Your "normal" would have shifted to something a lot more expensive to maintain. The cues in your environment telling you what "normal" means would be sending new, more expensive signals. (Page 174)

Take a look at this chart of how doctors responded when asked if they wanted various common end-of-life interventions. (Page 197)

One 2010 study published in the New England Journal of Medicine found that patients with advanced lung cancer who received palliative counseling in addition to the usual oncological treatments stopped their chemo sooner, began hospice care earlier, and reported significantly better quality of life at the end. And even though fewer patients in the early palliative care group received aggressive end-of-life care, they ended up surviving 25 percent longer. (Page 198)

A 2013 Gallup poll revealed that 70 percent of Americans hate their jobs or have simply “checked out" of them, while only 30 percent are "engaged and enthusiastic" about what they spend forty-plus hours per week doing. (Page 207)

Too Soon Old, Too Late Smart by Gordon Livingston

Metaphors We Live By by George Lakoff and Mark Johnson