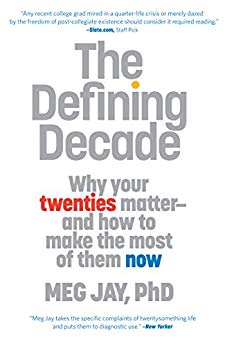 It’s a guide to not feeling lost in your 30s and 40s from a clinical psychologist who sees young people. It’s a must read if you’re in your 20s. Some of the research and examples are suspect, but the advice is excellent.

The book centers around Jay’s experience as a clinical psychologist seeing people in their 30s and 40s who are hamstrung by having a “lack of vision” in their 20s. This book is meant to provide people in their 20s with some direction around creating that vision (not in a corny way) so that they’re setting themselves up better for their 30s and beyond, instead of playing catch up after derping around for 8 years.

She highlights how the job market has shifted for people coming out of college:

“The Great Recession and its continuing aftermath have left many twentysomethings feeling naïve, even devastated. Twentysomethings are more educated than ever before, but a smaller percentage find work after college. Many entry-level jobs have gone overseas making it more difficult for twentysomethings to gain a foothold at home. With a contracting economy and a growing population, unemployment is at its highest in decades. An unpaid internship is the new starter job. About a quarter of twentysomethings are out of work and another quarter work only part-time. Twentysomethings who do have paying jobs earn less than their 1970s counterparts when adjusted for inflation.”

All of the options that we have seem to be to our detriment. Many of Jay’s patients describe feeling lost in a see of optoins, not able to dedicate themselves to anything because of so many alternatives.

Jay starts off the “work” section of the book by introducing the idea of “identity capital,” which is the collection of skills, relationships, and professional resources we build up over our lives. (Erik Erikson)

Many people in their 20s aren’t building up any of them by sitting around at home or taking dead-end jobs. GPA and college degrees don’t really count, since everyone has them.

Never building up this capital and never getting good jobs leads to depression, sitting around at home, drinking, the opiod epidemic…

Jay’s advice : take the job with the most career capital. Where you’ll build the most relationships, learn the most, grow the most. NOT necessarily make the most money.

Jay goes on to highlight how important weak ties are for the job market. Weak ties tend to be the best sources of employment, and a large network of weak ties gives you the broadest reach and greatest perspective, instead of a few very close ties.

Jay’s advice : build up your network of weak ties, instead of only spending time with your close friends. It’s the people you rarely talk to who might lead to fortuitious relationships down the road, and you want that broad exposure.

We all have “unthought knowns.” Things we’ve forgotten about ourselves, but still know under the surface. In context here, Jay is referring to the dreams of who we want to be and what we want to do that get stiffled by “practicality” and our peers.

Jay’s advice : Introspect and try to find what you know about yourself but are afraid to admit to yourself. What do you want deep down, but don’t know how to get, or are afraid you’ll fail at?

After graduating and being fixed on the college process, many students feel they’re “failing” in their 20s because they don’t know how to get an A anymore. They’re used to having a formula for success, and now that it’s gone, they feel lost.

Jay’s advice : Stop focusing on glory or impressing other people, focus on what you want to do with your life. If that means moving to Nashville and settling down, do it! You don’t have to become a rocket surgeon.

Jay’s advice : You want your professional life to have a story, not just be a list. Picking your interests and talents and what you want to apply them to can create a story and a narrative that you bring to interviews and coffee dates. You need to decide what you want to focus on.

Now Jay moves into the “Love” section of the book. She starts by pointing out how much we’ve pushed back the age of marriage, and how late into our 20s we’ve been continuing the “hookup culture.”

A continuing theme from people Jay talks to in their 30s is that they wish they had thought about serious relationships and marriage sooner.

Jay’s advice : Don’t be afraid to get into a serious relationship early.

Your significant others’ family is as important as they are.

Jay’s Advice : If you can’t stand your partner’s family, it’s not going to be good for the relationship, and is a serious consideration for whether or not you should continue.

Couples who live together before marriage tend to be less satisfied with marriage, and more likely to divorce.

It happens from “sliding not deciding,” slipping into living together out of convenience, then eventually deciding to get married. But your criteria for cohabitation will be lower than marriage, so you can end up in a suboptimal marriage.

Living together can lead to “lock-in” where it’s too hard to break up, despite a bad relationship, so you don’t.

Jay’s advice : Before moving in together, get clear on your commitment levels, and stress test the relationship in other ways (such as travel) to make sure it’s what you want.

Traveling in a third world country is the best way to stress test a relationship. You can’t escape each other, it’ll be a little stressful, and you’ll have to do things besides go on dates and have sex.

Being highly neurotic is toxic for relationships.

Jay’s advice : Make sure your personalities get along, and don’t ignore the differences that might ruin the relationship. Also, if you’re neurotic, you have to learn to control it, or you’ll destroy your relationships.

Now we move into the “brain and body” section of the book.

Jay highlights the difference between school and adults. School requires you to solve clear problems laid before you, adult life requires adapting and finding answers in uncertain situations.

Large social networks can improve our brains by forcing us to communicate in a diversity of ways and better shape our beliefs. Having a few close friends and no one outside our bubble harms our intellectual development.

People in their 20s, in this generation, react worse than normal to negative information. We take it more personally. Especially when it involves criticisms of competence.

Many people try to change their feelings by quitting the situation (job, relationship) causing them, instead of addressing the feelings or the conflict.

The crazy anxiety many people in their 20s have makes them constantly fear being broken up with, fired, dropped. This can lead them to quit or end relationships themselves so that they don’t get surprised. People think that the minute something goes wrong, they’re going to get fired, but jobs aren’t that fragile. Neither are relationships.

If you run to someone else to make you feel better when something bad happens, you further weaken your own ability to make yourself feel better.

Jay’s advice : Learn to calm yourself down, to realize that these little setbacks are not huge issues. That life goes on. Stop relying on other people to cheer you up.

Getting Along and Getting Ahead

Having goals can make us happier and more confident. Goal setting in your twenties can lead to more mastery, agency, and purpose in your thirties.

Jay’s advice : Set some goals that matter to you and work towards them. Whether their professional, personal, or social.

We all tend to discount the future in favor of the present. We don’t save enough, don’t take good care of ourselves, don’t invest in relationships.

Having some sort of momento mori, a reminder that you’ll die, is a good impetus to hustle.

And some last thoughts:

“The future isn’t written in the stars. There are no guarantees. So claim your adulthood. Be intentional. Get to work. Pick your family. Do the math. Make your own certainty. Don’t be defined by what you didn’t know or didn’t do. You are deciding your life right now.”