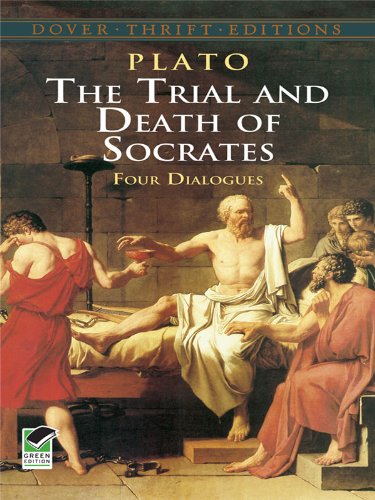 Socrates remains the greatest foundational influence on philosophy, and to understand his method, you have to read his dialogues. The rhetoric is brilliant, and at times, even hilarious.

“…asked the oracle to tell him whether there was any one wiser than I was, and the Pythian prophetess answered, that there was no man wiser.”

Basically some guy went to the Oracle and asked who the wisest person was, and they said Socrates. Socrates claims that he goes around asking people questions because he wants to prove that he isn’t the wisest man, but so far, all he’s discovered is that no one has any idea what they’re talking about and can’t defend their knowledge to his questioning.This leads to Socrates’ recognition of his own wisdom in the fact that he knows he knows nothing. Everyone else knows nothing, but they think they know something, and in doing so have dilluded themselves. Socrates is wise because he is aware of his own ignorance.“I am better off than he is,—for he knows nothing, and thinks that he knows. I neither know nor think that I know.”“I found that the men most in repute were all but the most foolish; and that some inferior men were really wiser and better.”

“Men of Athens, I honor and love you; but I shall obey God rather than you, and while I have life and strength I shall never cease from the practice and teaching of philosophy,”

“For if you kill me you will not easily find another like me, who, if I may use such a ludicrous figure of speech, am a sort of gadfly, given to the state by the God; and. the state is like a great and noble steed who is tardy in his motions owing to his very size, and requires to be stirred into life.”

“The difficulty, my friends, is not in avoiding death, but in avoiding unrighteousness; for that runs faster than death.”

“The hour of departure has arrived, and we go our ways—I to die, and you to live. Which is better God only knows.”

“But why, my dear Crito, should we care about the opinion of the many? Good men, and they are the only persons who are worth considering, will think of these things truly as they happened.”

“Yes, Crito, and they of whom you speak are right in doing thus, for they think that they will gain by the delay; but I am right in not doing thus, for I do not think that I should gain anything by drinking the poison a little later; I should be sparing and saving a life which is already gone; I could only laugh at myself for this. Please then to do as I say, and not to refuse me.”

“He was beginning to grow cold about the groin, when he uncovered his face, for he had covered himself up, and said (they were his last words)—he said: Crito, I owe a cock to Asclepius; will you remember to pay the debt? The debt shall be paid, said Crito; is there anything else?”

The Nicomachean Ethics by Artistotle