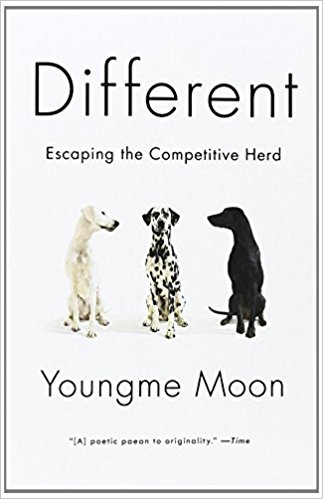 The message of this book is HUGE! Do NOT try to make sure your weaknesses are up to par as everyone else, love your weaknesses and accentuate your strengths. Be DIFFERENT! Porsche does not make cheap cars. Robert Greene does not write easy books. Nassim Taleb is not polite. Be Different (and better) to stand out and succeed.

“But what I have learned from this experience is that while a commitment to rehearsal will almost always produce competence, it will almost always produce a kind of automaticity, too. There is a reason why so many educators rail against rote learning, and it is that they know it can have the self-defeating effect of promoting a kind of mindlessness. Once we over-learn something, we cease to know it anymore at all.”

“I have a friend, a businesswoman, who claims that she can absorb the gist of a business book, any business book, in under an hour. Of course, whether or not you’re impressed by her claim depends on whether you’ve ever read one yourself. Most business books are written for easy digestion. They are reductive in the way that subway maps are reductive; the elimination of unnecessary information creates a kind of conceptual isolation that is functionally efficient to the extreme.”

“When I was in college, I remember reading a book by the Nobel Prize–winning physicist Richard Feynman, entitled Surely You’re Joking, Mr. Feynman! What was interesting about the book was that it appeared to be nothing more than a compilation of rambling anecdotes—about his personal life, his teaching, his work. And yet the weight of these anecdotes crept up on you, so that by the time you finished the book it was impossible to regard it as anything less than a finely honed indictment of the scientific discipline.”

“When a category has reached the point when it’s possible to make fun of the people who still believe in the differences across products, it has reached the point of what I refer to as heterogeneous homogeneity: The differences are there, but they are lost in a sea of sameness. Note that the mockery quotient of a category is directly correlated to the amount of meaningless differentiation in it.”

“But measurement can cut both ways. In track and field, we happen to measure speed, and so we cultivate a nation of speedsters. If we happened to measure running style, we would cultivate a nation of gazelles. The minute we choose to measure something, we are essentially choosing to aspire to it. A metric, in other words, creates a pointer in a particular direction. And once the pointer is created, it is only a matter of time before competitors herd in the direction of that pointer.”

“Another way to say this is to say that a competitive metric, any competitive metric, tends to bring out the herd in us. The dynamic can be likened to the observer effect in physics, only applied with too little foresight: The act of measurement changes the behavior of the thing being measured.”

“A funny thing happens the minute you begin to capture comparative differences on paper: There is a natural inclination for folks in the comparative set to focus on eliminating those differences, rather than accentuating them.”

“My guess is that you’d feel pressure to address the “vulnerabilities” in your brand. Meanwhile, it might not even occur to you to do the opposite—to double down on your strengths, further extending the distance between you and your competitors.”

“The truth of the matter is, true differentiation—sustainable differentiation—is rarely a function of well-roundedness; it is typically a function of lopsidedness. The same can be said for excellence. If you were to meet a brain surgeon who also claimed to be a pediatric orthopedist who also claimed to be a specialist in Botox treatments, you’d likely view all of his credentials with skepticism. Why? Because intuitively you understand that excellence on any extreme almost always involves a trade-off.”

“Negative trade-offs are not only a marker of excellence, they are a marker of differentiation. This is as true for products and brands as it is for brain surgeons.”

“He began by programming each artificial bird to abide by three simple rules: (1) avoid crowding or colliding into nearby birds; (2) keep up with nearby birds (by flying at roughly the same heading and speed); and (3) drift in the direction of the average position of nearby birds.”

“And yet in too many cases, this is what business has been reduced to: the artful packaging of meaningless distinctions as true differentiation.”

In-N-Out Burger. IKEA. JetBlue. What all of these brands have in common is that they have been able to cultivate the most elusive of all customer segments: folks willing to be missionaries for their brand.

“Cereal is cereal because it happens to be food broken down into spoon-sized bits; if the pieces were any larger, we’d have to call them cookies. A Frappuccino is a Frappuccino because it’s sold at Starbucks and priced accordingly; sold anywhere else, it’d have to be considered a caffeinated milkshake. This is some pretty skin-deep stuff.”

“A student of mine once remarked that anti-marketing might just be the antidote for folks weary of being marketed to in the traditional way.”

The 22 Immutable Laws of Marketing by Al Ries