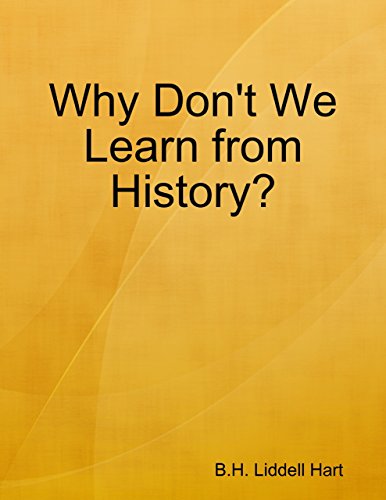 An excellent collection of lessons from history based primarily around warfare. The author died while writing it, unfortunately, but it’s still jam packed with insights.

““the most instructive, indeed the only method of learning to bear with dignity the vicissitude of fortune, is to recall the catastrophes of others.” History is the best help, being a record of how things usually go wrong.”

“I would add that the only hope for humanity, now, is that my particular field of study, warfare, will become purely a subject of antiquarian interest. For with the advent of atomic weapons we have come either to the last page of war, at any rate on the major international scale we have known in the past, or to the last page of history.”

“Fools,” said Bismarck, “say they learn by experience. I prefer to profit by other people’s experience.”

“But eighty is nothing for a student of history. There is no excuse for anyone who is not illiterate if he is less than three thousand years old in mind.”

““There are two roads to the reformation for mankind— one through misfortunes of their own, the other through the misfortunes of others; the former is the most unmistakable, the latter the less painful… the knowledge gained from the study of true history is the best of all educations for practical life.””

“History is the record of man’s steps and slips. It shows us that the steps have been slow and slight; the slips, quick and abounding. It provides us with the opportunity to profit by the stumbles and tumbles of our forerunners. Awareness of our limitations should make us chary of condemning those who made mistakes, but we condemn ourselves if we fail to recognize mistakes.”

“A shrewd committeeman often develops a technique based on this time calculation. He will defer his own intervention in the discussion until lunchtime is near, when the majority of the others are more inclined to accept any proposal that sounds good enough to enable them to keep their lunch engagement.”

“Far more effort is required to epitomize facts with clarity than to express them cloudily. Misstatements can be more easily spotted in sentences that are crystal clear than those that are cloudy.”

“To cope with the problems of the modern world we need, above all, to see them clearly and analyze them scientifically.”

“If a man reads or hears a criticsm of anything in which he has an interest, watch whether his first question is as to its fairness and truth. If he reacts to any such criticism with strong emotion; if he bases his complaint on the ground that is not “in good taste” or that it will have a bad effect— in short, if he shows concern with any question except “Is it true?” he thereby reveals that his own attitude is unscientific.”

“The student must first learn to approach the subject in a spirit of doubt.”

“If you can doubt at points where other people feel no impulse to doubt, then you are making progress.”

“We learn too that nothing has aided the persistence of falsehood, and the evils resulting from it, more than the unwillingness of good people to admit the truth when it was disturbing to their comfortable assurance.”

“How rarely does one meet anyone whose first reaction to anything is to ask “Is it true?””

“Loyalty is a noble quality, so long as it is not blind and does not exclude the higher loyalty to truth and decency. But the word is much abused. For “loyalty,” analyzed, is too often a polite word for what would be more accurately described as “a conspiracy for mutual inefficiency.””

“Loyalty is a noble quality, so long as it is not blind and does not exclude the higher loyalty to truth and decency. But the word is much abused. For “loyalty,” analyzed, is too often a polite word for what would be more accurately described as “a conspiracy for mutual inefficiency.””

“The most dangerous error is failure to recognize our own tendency to error. That failure is a common affliction of authority.”

“Hence the duty of the good citizen who is free from the responsibility of Government is to be a watchdog upon it, lest Government impair the fundamental objects which it exists to serve. It is a necessary evil, thus requiring constant watchfulness and check.”

“A life spent in sowing a few grains of fruitful thought is a life spent more effectively than in hasty action that produces a crop of weeds. That leads us to see the difference, truly a vital difference, between influence and power.”

“One of the clear lessons that history teaches is that no agreement between Governments has had any stability beyond their recognition that it is in their own interests to continue to adhere to it. I cannot conceive that any serious student of history would be impressed by such a hollow phrase as “the sanctity of treaties.””

“A model boy rarely goes far, and even when he does he is apt to falter when severely tested. A boy who conforms immaculately to school rules is not likely to grow into a man who will conquer by breaking the stereotyped professional rules of his time— as conquest has most often been achieved.”

The Rational Optimist by Matt Ridley

The Story of Philosophy by Will Durant

Energy and Civilization by Vaclav Smil

Smoke Signals by Martin A. Lee