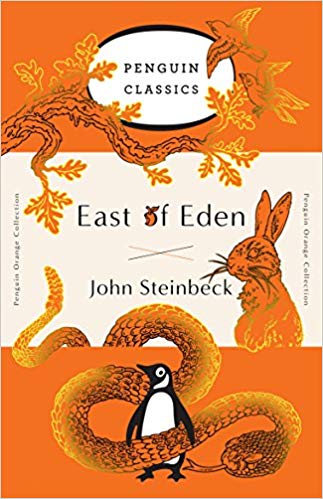 Absolutely beautiful, a must read. No crazy plot, but there doesn’t need to be.

“Once a woman told me that colored flowers would seem more bright if you added a few white flowers to give the colors definition.”

“The gods are fallen and all safety gone. And there is one sure thing about the fall of gods: they do not fall a little; they crash and shatter or sink deeply into green muck. It is a tedious job to build them up again; they never quite shine. And the child’s world is never quite whole again. It is an aching kind of growing.”

“He breathed excitedly, high against his throat. For Alice had been naked— she had been smiling. He wondered how she had dared such wantonness. And he ached toward her with a longing that was passionate and hot. He did not know what it was about, but all the long lack of holding, of rocking, of caressing, the hunger for breast and nipple, and the softness of a lap, and the voice-tone of love and compassion, and the sweet feeling of anxiety— all of these were in his passion, and he did not know it because he did not know that such things existed, so how could he miss them?”

“As with many people, Charles, who could not talk, wrote with fullness. He set down his loneliness and his perplexities, and he put on paper many things he did not know about himself.”

“A time splashed with interest, wounded with tragedy, crevassed with joy— that’s the time that seems long in the memory. And this is right when you think about it. Eventlessness has no posts to drape duration on. From nothing to nothing is no time at all.”

“But there must have been some steel cord in her throat, for Cathy’s voice could cut like a file when she wished.”

“Cathy had none of this. She never conformed in dress or conduct. She wore whatever she wanted to. The result was that quite often other children imitated her.”

“WHEN TWO MEN LIVE TOGETHER they usually maintain a kind of shabby neatness out of incipient rage at each other. Two men alone are constantly on the verge of fighting, and they know it. Adam Trask had not been home long before the tensions began to build up. The brothers saw too much of each other and not enough of anyone else.”

“Our species is the only creative species, and it has only one creative instrument, the individual mind and spirit of a man. Nothing was ever created by two men. There are no good collaborations, whether in music, in art, in poetry, in mathematics, in philosophy. Once the miracle of creation has taken place, the group can build and extend it, but the group never invents anything. The preciousness lies in the lonely mind of a man.”

“And this I believe: that the free, exploring mind of the individual human is the most valuable thing in the world. And this I would fight for: the freedom of the mind to take any direction it wishes, undirected. And this I must fight against: any idea, religion, or government which limits or destroys the individual.”

“He took no rest, no recreation, and he became rich without pleasure and respected without friends.’

“That’s why I’m talking to you. You are one of the rare people who can separate your observation from your preconception. You see what is, where most people see what they expect.”

“In uncertainty I am certain that underneath their topmost layers of frailty men want to be good and want to be loved. Indeed, most of their vices are attempted short cuts to love. When a man comes to die, no matter what his talents and influence and genius, if he dies unloved his life must be a failure to him and his dying a cold horror. It seems to me that if you or I must choose between two courses of thought or action, we should remember our dying and try so to live that our death brings no pleasure to the world.”

“I don’t know. I’ll have to think about it. They say a clean cut heals soonest. There’s nothing sadder to me than associations held together by nothing but the glue of postage stamps. If you can’t see or hear or touch a man, it’s best to let him go.”

“It is one of the triumphs of the human that he can know a thing and still not believe it.”

“She felt rather gay, as though she were going to a party. Gingerly she fished the chain out from her bodice, unscrewed the little tube, and shook the capsule into her hand. She smiled at it.”

“And then her eyes closed again and her fingers curled as though they held small breasts. And her heart beat solemnly and her breathing slowed as she grew smaller and smaller and then disappeared— and she had never been.”

The Martian by Andy Weir