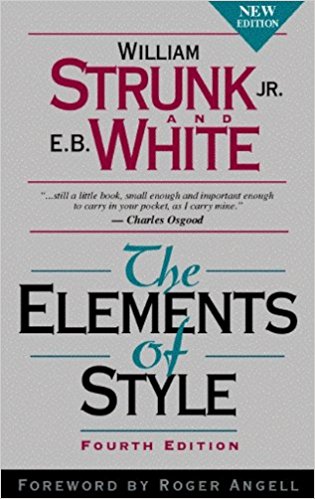 Some very important lessons for the aspiring writer. The best way to use it is to read through it and find the examples where you can’t immediately tell what is wrong, study the explanations, and then apply those learnings to your own writing.

“The active voice is usually more direct and vigorous than the passive:

I shall always remember my first visit to Boston .

This is much better than:

My first visit to Boston will always be remembered by me .

“Many a tame sentence of description or exposition can be made lively and emphatic by substituting a verb in the active voice for some such perfunctory expression as there is, or could be heard.

There were a great number of dead leaves lying on the ground.

The sound of a guitar somewhere in the house could be heard.

Somewhere in the house a guitar hummed sleepily.

The reason that he left college was that his health became impaired.

It was not long before he was very sorry that he had said what he had.

He soon repented his words.”

He was not very often on time.

He did not think that studying Latin was much use.

He thought the study of Latin useless.

The Taming of the Shrew is rather weak in spots. Shakespeare does not portray Katharine as a very admirable character, nor does Bianca remain long in memory as an important character in Shakespeare’s works.

The women in The Taming of the Shrew are unattractive. Katharine is disagreeable, Bianca insignificant.”

“Consciously or unconsciously, the reader is dissatisfied with being told only what is not; he wishes to be told what is. Hence, as a rule, it is better to express even a negative in positive form.

did not pay any attention to

did not have much confidence in

“Prefer the specific to the general, the definite to the vague, the concrete to the abstract.

A period of unfavorable weather set in.

It rained every day for a week.

He showed satisfaction as he took possession of his well-earned reward.

He grinned as he pocketed the coin.

There is a general agreement among those who have enjoyed the experience that surf-riding is productive of great exhilaration.

All who have tried surf-riding agree that it is most exhilarating.”

“Vigorous writing is concise. A sentence should contain no unnecessary words, a paragraph no unnecessary sentences, for the same reason that a drawing should have no unnecessary lines and a machine no unnecessary parts. This requires not that the writer make all his sentences short, or that he avoid all detail and treat his subjects only in outline, but that he make every word tell.”

“In especial the expression the fact that should be revised out of every sentence in which it occurs.

owing to the fact that

in spite of the fact that

call your attention to the fact that

remind you (notify you)”

“A common violation of conciseness is the presentation of a single complex idea, step by step, in a series of sentences or independent clauses which might to advantage be combined into one.

Macbeth was very ambitious. This led him to wish to become king of Scotland. The witches told him that this wish of his would come true. The king of Scotland at this time was Duncan. Encouraged by his wife, Macbeth murdered Duncan. He was thus enabled to succeed Duncan as king. (51 words.)

Encouraged by his wife, Macbeth achieved his ambition and realized the prediction of the witches by murdering Duncan and becoming king of Scotland in his place. (26 words.)”

“Interesting. Avoid this word as a perfunctory means of introduction. Instead of announcing that what you are about to tell is interesting, make it so.

An interesting story is told of

(Tell the story without preamble.)”