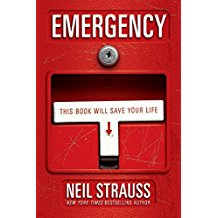 A fun, easy to read journey from zero to full apocalypse readiness. It definitely falls more on the “story” side than the “how to” side, but it provides a good overview of prepping and how you can get started.

Christopher Columbus wasn’t just searching for gold or spices or a new trade route, he thought the world was going to end and he wanted to save as many souls as he could.

“Yet on every highway, there’s a drunk driver hurtling at 80 miles an hour in two tons of steel. In every neighborhood, there’s a thief armed with a deadly weapon. In every city, there’s a terrorist with a bloody agenda. In every nuclear country, there’s a government employee sitting in front of a button. In every cell in our body, there’s the potential to mutate into cancer. They are all trying to kill us. And they don’t even know us. They don’t care that if they succeed, we will never know what tomorrow holds for us.” [46]

There’s a book called “Millennium” by Jacques Attali where he predicted that human beings would evolve into technological nomads.

The Sovereign Society teaches people how to be independent of their governments.

Memetics, the theory that ideas move through culture much like viruses. Thanks to the catalysts of 9/11 and Katrina, the escapist meme had clearly spread through the minds of people in the US.

In Denial of Death by Ernest Becker, we fear our own obliteration so we pursue “immortality projects” that will outlast us, whether it be our work, our children, the way we affect others, a good seat in the afterlife, or hope.

Prepping is simply another form of insurance, just like you buy health and disaster insurance.

You don’t need money for building your second base, just have it built on some kind of business and get someone else to fund it.

From The Rise and Fall of the Great Powers by Paul Kennedy: “Great Powers in relative decline instinctively respond by spending more on ‘security’ and thereby divert potential resources from ‘investment’ and compound their long term dilemma.”

The idea of the “perpetual traveler” is that just as you can shop at different stores, you can live in different locales to find the governments cultures and lifestyles you want.

Sic Itur Ad Astra is a book on how to build a society based on personal freedom.

The way to break free of nationality according to Harry Schultz was to establish a “three flag” system: having a second passport, a safe location for your assets in another country, and a legal address in a tax haven. You can also add a fourth and fifth flag: an additional country as a business base and a number of “playground” countries in which you spend leisure time.

Some countries allow you to get a passport by investing in the country, but these are always changing so you have to do your research.

One of the most important things you can do is lock down your computer security.

“According to the WHO, the US had the fifty-fourth fairest health care system in the world, with lack of medical coverage leading to an estimated 18,000 unnecessary deaths a year.

Signs that you should leave the country:

In terms of riots or terrorist incidents, the threat zone is going to be pretty limited. You can walk out of a threat zone, typically. All you need for the basics are nice shoes and an urban survival kit (a cell phone, an ATM card, and a pistol).

You don’t rise to the occasion, you default to the level of your training. That’s why you have to train and practice.

Bugging out is slang for leaving to go somewhere safe. You should have a bug out bag (BOB), a bug out vehicle (BOV), and a bug out location (BOL) stocked with provisions to get you through whatever crisis is happening.

You should have a planned escape route from your home to your BOL.

You can join a CERT team (Community Emergency Response Team) to get basic disaster response training.

Best place to get motorcycle training: the motorcycle safety foundation

In the quest for safety, be sure you don’t put yourself at more risk, like by doing a lot of motorcycle riding or getting in a shooting accident.

There are forty gallons of drinkable water stored in most home heaters, as well as gallons more in toilet tanks. But never drink from the bowl.

Don’t put gallons of water on concrete floor, since it can interact with the plastic and contaminate the water.

You can do a “three-day test” where you turn everything off (water, power, etc.) to see what else you need in your system.

In the event of a nuclear attack, hole up in a basement or the third from the top floor of the highest building around, then cover all openings with plastic or duct tape.

If you rush towards the exits in a bombing, you risk getting trampled or hit with a secondary device. Instead, head to the bathroom, find a sprinkler, break it open, and decontaminate yourself. Don’t pull contaminated clothing over your head, pull it off.

If you’re ever in a public area and someone starts spraying gunfire, get down on your stomach with your feet towards the attacker, your face away, and your hands covering your head.

The rule of threes: you can only make it 3 weeks without food, 3 days without water, and 3 hours in exposure to the elements

Conservation of energy is one of the most important rules for survival.

When lost, individuals usually circle in the direction of their dominant hand. And though they might think they’re traveling in a straight line, they’re usually circling within the same square-mile area.

You can get water out of nowhere using a “solar still.”

Five interesting questions for the documentary by Forti:

You can take an urban escape and evasion course to learn how to get away and survive in an urban environment.

“We’re nine meals away from chaos in this country” — Reeve

You can create caches in advantageous locations where you hide food, water, supplies, etc. These can be buried or put in public lockers.

If you’re going to live in the city, the key is getting out ahead of time. You have to keep your finger on the pulse and look for tripwires. If you get stuck in the city, your best bet is to shelter in place for as long as possible. Bugging out should be your last resort.

Eating like shit is the culinary equivalent of walking through Baghdad at night.

Being in and around motor vehicles is the most dangerous thing we do, there were 45k deaths from motor vehicles, only 12k from guns. More people kill themselves with them, 17k. Suicide is much more common, 32k, than homicide, 18k.

Terrorism is extremely rare compared to all the other ways you could die.

The surest way to die young is to be lonely.