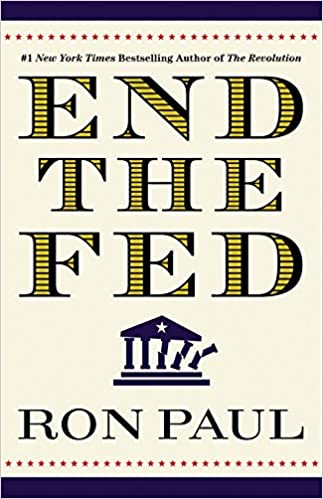 It's a book by a politician, about what you expect. Some interesting tid bits on the history of the Fed but you could get it from Wikipedia.

Even the Fed itself claims that part of its job is to keep inflation in check. This is something like the tobacco industry claiming that it is trying to stop smoking or the automobile industry claiming that it is trying to control road congestion.The Fed is in the business of generating inflation. It might attempt to stop the effects of inflation, namely, rising prices. But under the old definition of inflation-an artificial increase in the supply of money and credit the entire reason for the Fed's existence is to generate more, not less, of it.What the largest banks desire is precisely what we might expect any large corporation to desire: privatized profits and socialized losses. (Page 14)

The core of the problem is the conglomeration of two distinct functions of a bank. The first is the warehousing function, the most traditional function of a bank. The second service the bank provides is a loan service... The institution of fractional reserves mixes these two functions, such that warehousing becomes a source for lending… that newly loaned money is deposited yet again in checkable deposits. It is loaned out again and deposited, with each depositor treating the loan money as an asset on the books.In this way, fractional reserves create new money, pyramiding it on top of a fraction of old deposits. Depending on reserve ratios and banking practices, an initial deposit of $1,000, thanks to this "money multiplier," turns into deposits of $10,000.² (Page 16)

In a true free market, however, there tends to be a tradeoff: you can enjoy the service of a money warehouse or you can loan your money to the bank and hope for a return on your investment (Page 17)

A statement by the Comptroller of the Currency in 1914 promised that a ridiculous nirvana would be ushered in by the Fed. It "supplies a circulating medium absolutely safe," the statement said. Further, "under the operation of this law such financial and commercial crises, or 'panics,' as this country experienced in 1873, in 1893, and again in 1907, with the attendant misfortunes and prostrations, seem to be mathematically impossible (Page 24)

Before gold became legal to own in 1975, many gold bugs were buying it. I purchased my first gold shortly after the breakdown of the Bretton Woods Agreement. The law was circumvented by buying numismatic coins (any coin dated 1947 or older was considered a numismatic coin). Mexico accommodated American citizens by minting the beautiful Mexican 50 peso, weighing 1.2 ounces, and placing the date 1947 on it (Page 55)

As Mises wrote in 1919, "one can say without exaggeration that inflation is an indispensable means of militarism. Without it, the repercussions of war on welfare become obvious much more quickly and penetratingly, war weariness would set in much earlier. (Page 64)

focusing on the housing market alone was just the last in a parade of claims about the root problem. There are other sectors that have suffered, in finance, manufacturing, services, retails, and stocks. These are all merely symptoms of a deeper problem: the Fed and its role in sustaining an unsustainable paper money system. (Page 124)

Much has been said about the subprime loans encouraged by government regulations made over the decades before the housing bubble burst, but one could argue that all loans that come from credit created out of thin air have an element of being subprime (Page 132)

Artificially low interest rates are achieved by inflating the money supply, and they penalize the thrifty and cheat those who save. They promote consumption and borrowing over savings and investing. Manipulating interest rates is an immoral act. It's economically destructive.The market rate of interest provides crucial information for the smooth operation of the economy. A central bank setting interest rates is price-fixing and is a form of central economic planning. Price-fixing is a tool of socialism and destroys production. (Page 133)