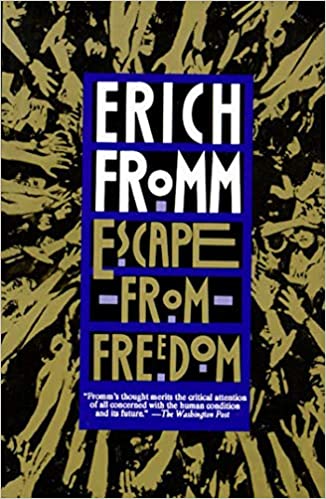 An excellent work of philosophy exploring our underlying anxiety caused by the ultimate freedom afforded to us by modern living, and our desire to escape that freedom for a more comfortable life.

It is the thesis of this book that modern man, freed from the bonds of preindividualistic society, which simultaneously gave him security and limited him, has not gained freedom in the positive sense of the realization of his individual self; that is, the expression of his intellectual, emotional and sensuous potentialities. Freedom, though it has brought him independence and rationality, has made him isolated and, thereby, anxious and powerless. (Page 1)

man, the more he gains freedom in the sense of emerging from the original oneness with man and nature and the more he becomes an "individual," has no choice but to unite himself with the world in the spontaneity of love and productive work or else to seek a kind of security by such ties with the world as destroy his freedom and the integrity of his individual self. (Page 21)

Human existence begins when the lack of fixation of action by instincts exceeds a certain point; when the adaptation to nature loses its coercive character; when the way to act is no is a longer fixed by hereditarily given mechanisms. In other words, human existence and freedom are from the beginning inseparable. (Page 31)

Significant changes in the psychological atmosphere accompanied the economic development of capitalism. A spirit of restlessness began to pervade life toward the end of the Middle Ages. The concept of time in the modern sense began to develop. Minutes became valuable: a symptom of this new sense of time is the fact that in Nürnberg the clocks have been striking the quarter hours since the sixteenth century. Too many holidays began to appear as a misfortune. Time was so valuable that one felt one should never spend it for any purpose which was not useful. (Page 58)

with the beginning of capitalism all classes of society started to move. There ceased to be a fixed place in the economic order which could be considered a natural, an unquestionable one. The individual was left alone; everything depended on his own effort, not on the security of his traditional status. (Page 59)

capitalism freed the individual. It freed man from the regimentation of the corporative system; it allowed him to stand on his own feet and to try his luck. He became the master of his fate, his was the risk, his the gain. (Page 61)

The individual is freed from the bondage of economic and political ties. He also gains in positive freedom by the active and independent role which he has to play in the new system. But simultaneously he is freed from those ties which used to give him security and a feeling of belonging. (Page 62)

The compulsive quest for certainty, as we find with Luther, is not the expression of genuine faith but is rooted in the need to conguer the unhearable doubt.Luther's solution is one which we find present in many individuals today, who do not think in theological terms: namely to find certainty by elimination of the isolated individual self, by becoming an instrument in the hands of an overwhelmingly strong power outside of the individual. (Page 78)

although freedom of speech constitutes an important victory in the battle against old restraints, modern man is in a position where much of what "he" thinks and says are the things that everybody else thinks and says; that he has not acquired the ability to think originally-that is, for himself which alone gives meaning to his claim that nobody can interfere with the expression of his thoughts. (Page 105)

the methods of political propaganda tend to increase the feeling of insignificance of the individual voter. Repetition of slogans and emphasis on factors which have nothing to do with the issue at stake numb his critical capacities. The clear and rational appeal to his thinking is rather the exception than the rule in political propaganda-even in democratic countries. Confronted with the power and size of the parties as demonstrated in their propaganda, the individual voter cannot help feeling small and of little significance. (Page 129)

The extent to which the average person in America is filled with the same sense of fear and insignificance seems to find a telling expression in the fact of the popularity of the Mickey Mouse pictures. There the one theme-in so many variationsis always this: something little is persecuted and endangered by something overwhelmingly strong, which threatens to kill or swallow the little thing. The little thing runs away and eventually succeeds in escaping or even in harming the enemy. (Page 131)

Once the primary bonds which gave security to the individual are severed, once the individual faces the world outside of himself as a completely separate entity, two courses are open to him since he has to overcome the unbearable state of powerlessness and aloneness. By one course he can progress to "positive freedom"; he can relate himself spontaneously to the world in love and work, in the genuine expression of his emotional, sensuous, and intellectual capacities; he can thus become one again with man, nature, and himself, without giving up independence and integrity of his individual self. The other course open to him is to fall back, to give up his freedom, and to try to overcome his aloneness by eliminating the gap that has the arisen between his individual self and the world. (Page 139)

The first mechanism of escape from freedom I am going to deal with is the tendency to give up the independence of one's own individual self and to fuse one's self with somebody or something outside of oneself in order to acquire the strength which the individual self is lacking. (Page 140)

the amount of destructiveness to be found in individuals is proportionate to the amount to which expansiveness of life is curtailed. (Page 181)

Ask an average newspaper reader what he thinks about a certain political question. He will give you as “his" opinion a more or less exact account of what he has read, and yet-and this is the essential point-he believes that what he is saying is the result of his own thinking. (Page 190)

We could go on quoting many more instances in daily life in which people seem to make decisions, seem to want something, but actually follow the internal or external pressure of “having" to want the thing they are going to do. As a matter of fact, in watching the phenomenon of human decisions, one is struck by the extent to which people are mistaken in taking as  "their" decision what in effect is submission to convention, duty, or simple pressure. It almost seems that “original" decision is a comparatively rare phenomenon in a society which supposedly makes individual decision the cornerstone of its existence. (Page 198)

The right to express our thoughts, however, means something only if we are able to have thoughts of our own; freedom from external authority is a lasting gain only if the inner psychological conditions are such that we are able to establish our own individuality. (Page 240)

In our culture, however, education too often results in the elimination of spontaneity and in the substitution of original psychic acts by superimposed feelings, thoughts, and wishes. (Page 241)

From the very start of education original thinking is discouraged and ready-made thoughts are put into people's heads. How this is done with young children is easy enough to see. They are filled with curiosity about the world, they want to grasp it physically as well as intellectually.They want to know the truth, since that is the safest way to orient themselves in a strange and powerful world. Instead, they are not taken seriously, and it does not matter whether this attitude takes the form of open disrespect or of the subtle condescension which is usual towards all who have no power (such as children, aged or sick people). Although this treatment by itself offers strong discouragement to independent thinking, there is a worse handicap: the insincerity-often unintentional-which is typical of the average adult's behavior toward a child. (Page 246)

the emphasis on knowledge of facts, or I should rather say on information. The pathetic superstition prevails that by knowing more and more facts one arrives at knowledge of reality. (Page 247)

"If I do get this new job, if I get this better car, if I can take this trip-what then? What is the use of it all? Is it really I who wants all this? Am I not running after some goal which is supposed to make me happy and which eludes me as soon as I have reached it?" These questions, when they arise, are frightening, for they question the very basis on which man's whole activity is built, (Page 251)

this bespeaks a dim realization of the truth-the truth that modern man lives under the illusion that he knows what he wants, while he actually wants what he is supposed to want. (Page 251)

This loss of identity then makes it still more imperative to conform; it means that one can be sure of oneself only if one lives up to the expectations of others. (Page 253)

By conforming with the expectations of others, by not being different, these doubts about one's own identity are silenced and a certain security is gained. (Page 253)

Modern man is starved for life. But since, being an automaton, he cannot experience life in the sense of spontaneous activity he takes as surrogate any kind of excitement and thrill: the thrill of drinking, of sports, of vicariously living the excitements of fictitious persons on the screen. (Page 254)

We believe that the realization of the self is accomplished not only by an act of thinking but also by the realization of man's total personality, by the active expression of his emotional and intellectual potentialities. These po-od tentialities are present in everybody; they become real only to the extent to which they are expressed. In other words, positive freedom consists in the spontaneous activity of the total, integrated personality. (Page 257)

man misses the only satisfaction that can give him real happiness-the experience of the activity of the present moment-and chases after a phantom that leaves him disappointed as soon as he believes he has caught it-the illusory happiness called success. (Page 261)

there is only one meaning of life: the act of living itself. (Page 261)