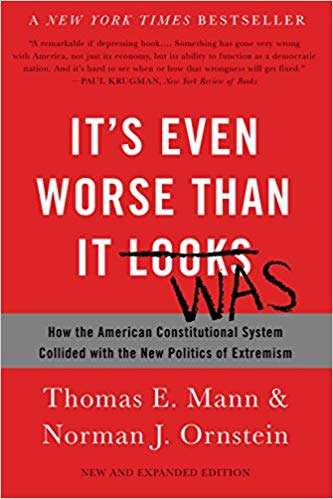 An interesting (and depressing) overview of the problems in American politics. Even more relevant with the recent Trump shenanigans.

We’ve reached a point of such intense political adversity that people who created a bill originally will lobby against it if their opponents end up supporting it.

Also, since there is so much news variety now, news stations don’t need to portray a nice even view of the situation. They can appeal to a niche in order to maintain a loyal base, since TV usage is 60+ hours per week (!!), and people move around significantly between different channels.

“CNN has tried multiple business models, but has settled on having regular showdowns pitting either a bedrock liberal against a bedrock conservative or a reliable spinner for Democrats against a Republican counterpart. For viewers, there is reinforcement that the only dialogue in the country is between polarized left and right, and that the alternative is cynical public relations with no convictions at all.”

Three reforms to cool the conflict between the parties: