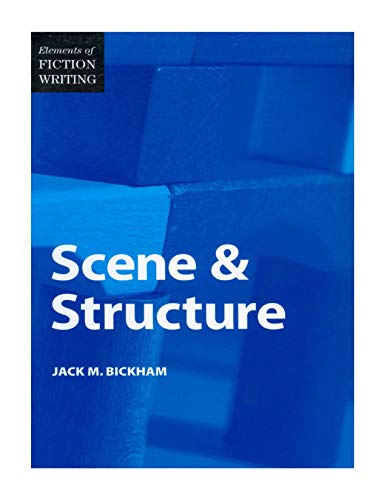 Fantastic book on core elements of good storytelling. Highly recommend it for non-fiction writers too.

remember the following facts about readers:

a story starts with change, which leads to a goal, which raises a story question in the reader's mind. But how do you end the novel? You do so by answering the story question you posed at the outset. (Page 9)

fiction must make more sense than real life if general readers are to find it credible. So, for example, in real life someone may fall ill for no apparent reason and with no evident cause. In fiction, the character would have to be seen depressed about recent developments and tired from overwork (Page 12)

Look at every turn in the story-every event-and make sure that there is cause for it. (Page 13)

Stimulus must be externalthat is, action or dialogue, something that could be witnessed if the transaction were on a stage.

What is a scene? It's a segment of story action, written moment-bymoment, without summary, presented onstage in the story "now." It is not something that goes on inside a character's head; it is physical. It could be put on the theater stage and acted out.

What is the pattern of a scene? Fundamentally, it is:

scene begins with the most important character – invariably the viewpoint characterwalking into a situation with a definite, clear-cut, specific goal which appears to be immediately attainable.This goal represents an important step in the character's game plansomething to be obtained or achieved which will move him one big step closer to attainment of his major story goal. (Page 24)

most of the time the character actually states his immediate scene goal in obvious, unmistakable fashion. (Page 25)

The scene question cannot be some vague, philosophical one such as, “Are bankers nice?" or "What motivates people like Fred?" The question is specific, relates to a definite, immediate goal, and can be answered with a simple yes or no. (Page 25)

we must develop conflict. And conflict-the give-and-take between two characters-will make up 95 to 98 percent of the length of the scene. (Page 26)

you want to build your scenes as big as possible, and you want to make them just as believable-as lifelike-as you possibly can. The most important way you attain this end is by presenting each scene moment by moment, leaving nothing out, because there is no summary in real life, and you can't have any summary in the scene, either, if you are shooting for maximum lifelikeness and reader involvement (Page 26)

the scene, if it is to work as a building block in your novel, must end not well, but badly. Fred cannot be allowed to attain his scene goal. He must encounter a new setback. He must leave in worse shape than he was when he went in. Any time you can build a scene which leaves your character in worse shape, you have probably "made progress" in terms of your story's development! (Page 27)

go through your work and mark the scene-opening goal statement in red, the conflict portion in blue, and the disaster in black (Page 39)

Clearly, in any long story there must be some structural component besides the scene. There are essentially two: transition and sequel. (Page 50)

Transition is a very simple device which provides a direct statement to the reader to the effect that a change in time, place or viewpoint has happened since the last scene (Page 50)

Emotion thought decision action. The four structural compartments of the sequel. Sequels thus get a character from one disaster to the start of the next scene (Page 52)

Scenes are exciting, conflictful, densely packed with action and dialogue, and therefore fast-reading.Sequels, on the other hand, are thoughtful, can be extended, have summary in them, and are therefore slow-reading. (Page 63)

novice novels that fail because they move too slowly outnumber those that move too fast by a margin of about 10 to 1. (Page 69)

There seem to be at least five obvious reasons why this should be so:

plan, basing your whole book's architecture on Scene #1-Sequel #1Scene #2-Sequel #2-Scene #3-Sequel #3, etc., with every part in its natural order, nothing left out, and no variations of any kind. Then, having laid out your entire story blueprint, maybe you will want to introduce some variations for good reasons. (Page 73)

Let's look at the five major ways you can vary your scene structure.

IT'S POSSIBLE TO THINK YOU UNDERSTAND scene structure, yet fall prey now and again to any of a number of common errors. Here is a partial list of things that can go wrong:

In the usual scene of confrontation between story people, the fight is best understood if it's head to head-meaning just two people, the viewpoint character and his antagonist. (Page 84)

Consider the following statements:The cold wind blew harder.A gunshot rang out.It was terrifying.These are fine observations, but in none of them do we know where the viewpoint is. Ordinarily you should recast such statements to reemphasize the viewpoint, thus:She felt the cold wind blow harder.He heard a gunshot ring out.89 It was terrifying, she thought. Or:Terror crept through her (Page 89)

Mention the threat of avalanches and have the characters fight briefly about it, and you automatically make the reader pick up on the subject matter as a clue about future possibilities. (Page 91)

Every novelist should have one question in mind at every step of planning, writing and revising her novel: How can I make sure the reader isn't getting bored? (Page 93)

The scenes will develop through a series of disasters which heap new and unexpected woes on the character's head, but do not obviously relate to one another. (Page 95)

scenes will develop in such a way that the hero must take on some entirely unrelated, shorter-term goal-quest to clear the decks for an eventual return to the original story line. (Page 96)

scenes will be arranged in an interleaved pattern with scenes representing other plots-subplots-most of which will relate in some distant way to the central quest, but some which may not have anymore obvious link than the fact that they are playing out in the same setting at the same time. (Page 96)

Scenes can be arranged under a plot assumption that puts a clearcut time limit on the story actiona deadline which must be met-so that a clock is always ticking.And with every tick of the clock, the reader gets tenser-the story has better rising action-because time is running out (Page 96)

The scenes will be arranged so that options dwindle. (Page 97)

Plot complications and potentially terrible developments previously hidden from the reader can be revealed. (Page 97)

In a Scene to keep the reader worried

Often it is more economical in terms of space, and more effective for the reader, if you can avoid the all-out flashback scene and instead summarize it in the sequel form. (Page 111)

A chase, say, or physical fight of some kind will be replete with give-andtake, many strong stimuli as the battle. Thus it's a natural situation for internalizations to take opponents place in response to some of the bad stimuli (Page 113)

In such a scene-an outdoorsman maneuvering around a mountainside with the intent of blocking the escape of another man, for examplea sense of conflict is created by lengthening the internalizations and making the viewpoint character consider alternatives and possible disasters as he continually reevaluates the situation and second-guesses himself (Page 113)

Regardless of how long or short your chapters may be, always end them at a point where the reader can't put the book down.You should try to have some general norm for chapter length in any given manuscript-an average chapter being fourteen typewritten pages, for example. But if dramaturgy suggests a chapter of only one page here and there as the best way to keep your reader hooked, don't be afraid to do it. (Page 117)

You end chapters at places which will hook readers. You do not devise your chapters to provide convenient blank spaces in between them for purposes of transition. (Page 118)

Each new subplot in a novel-each new subplot story question-is like another plate or pack of plates being put in the air by the street juggler. (Page 122)