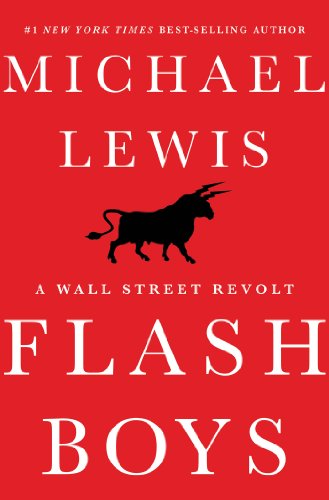 A scary and interesting overview of the high-frequency trading world. Definitely got me scared for the next potential crash, which I imagine was part of the idea behind it.

“Dark pools were another rogue spawn of the new financial marketplace. Private stock exchanges, run by the big brokers, they were not required to reveal to the public what happened inside them. They reported any trade they executed, but they did so with sufficient delay that it was impossible to know exactly what was happening in the broader market at the moment the trade occurred.”

“Someone out there was using the fact that stock market orders arrived at different times at different exchanges to front-run orders from one market to another.”

“Then came the so-called flash crash. At 2: 45 on May 6, 2010, for no obvious reason, the market fell six hundred points in a few minutes. A few minutes later, like a drunk trying to pretend he hadn’t just knocked over the fishbowl and killed the pet goldfish, it bounced right back up to where it was before.”

“Every systemic market injustice arose from some loophole in a regulation created to correct some prior injustice. “No matter what the regulators did, some other intermediary found a way to react, so there would be another form of front-running,””

“After the meeting, RBC conducted a study, never released publicly, in which they found that more than two hundred SEC staffers since 2007 had left their government jobs to work for high-frequency trading firms or the firms that lobbied Washington on their behalf. Some of these people had played central roles in deciding how, or even whether, to regulate high-frequency trading. For instance, in June 2010, the associate director of the SEC’s Division of Trading and Markets, Elizabeth King, had quit the SEC to work for Getco. The SEC, like the public stock exchanges, had a kind of equity stake in the future revenues of high-frequency traders.”

“Scalpers Inc. trades for the sole purpose of interfering with trading that would have happened without it. In buying from every seller and selling to every buyer, it winds up: a) doubling the trades in the marketplace and b) being exactly 50 percent of that booming volume. It adds nothing to the market but at the same time might be mistaken for the central player in that market.”

“Another incentive of Scalpers Inc. is to fragment the marketplace: The more sites at which the same stocks changed hands, the more opportunities to front-run investors from one site to another.”

“A front-runner sells you a hundred shares of some stock to discover that you are a buyer and then turns around and buys everything else in sight, causing the stock to pop higher (or the opposite, if you happen to be a seller).”

The Most Important Thing by Howard Marks