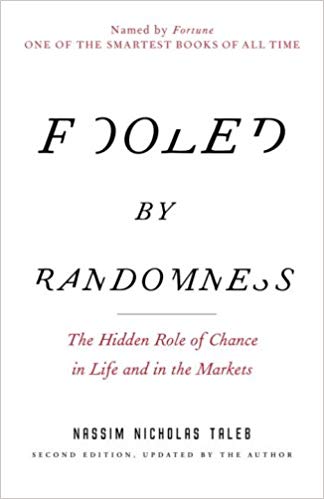 Always love Taleb. I found this book less practical than Antifragile, but it lays a conceptual groundwork for Black Swan and Antifragile to “warm you up” for his next books.

“Notice how our brain sometimes gets the arrow of causality backward. Assume that good qualities cause success; based on that assumption, even though it seems intuitively correct to think so, the fact that every intelligent, hardworking, persevering person becomes successful does not imply that every successful person is necessarily an intelligent, hardworking, persevering person (it is remarkable how such a primitive logical fallacy— affirming the consequent— can be made by otherwise very intelligent people, a point I discuss in this edition as the “two systems of reasoning” problem).

“Does the book industry suffer from the classical “expert problem” with the buildup of rules of thumb that do not have empirical validity? More than half a million readers later I am discovering that books are not written for book editors.”

“Ask a profitable investor to explain the reasons for his success; he will offer some deep and convincing interpretation of the results. Frequently, these delusions are intentional and deserve to bear the name “charlatanism.””

“Perhaps ridding ourselves of our humanity is not in the works; we need wily tricks, not some grandiose moralizing help.”

“Solon was wise enough to get the following point; that which came with the help of luck could be taken away by luck (and often rapidly and unexpectedly at that). The flipside, which deserves to be considered as well (in fact it is even more of our concern), is that things that come with little help from luck are more resistant to randomness… it does not matter how frequently something succeeds if failure is too costly to bear.”

“Mild success can be explainable by skills and labor. Wild success is attributable to variance.”

“For one cannot consider a profession without taking into account the average of the people who enter it, not the sample of those who have succeeded in it.”

“Clearly, the quality of a decision cannot be solely judged based on its outcome, but such a point seems to be voiced only by people who fail.”

“Reality is far more vicious than Russian roulette. First, it delivers the fatal bullet rather infrequently, like a revolver that would have hundreds, even thousands, of chambers instead of six… It is also related to a problem called denigration of history, as gamblers, investors, and decision-makers feel that the sorts of things that happen to others would not necessarily happen to them… Second, unlike a well-defined, precise game like Russian roulette, where the risks are visible to anyone capable of multiplying and dividing by six, one does not observe the barrel of reality.”

“I do not dispute that arguments should be simplified to their maximum potential; but people often confuse complex ideas that cannot be simplified into a media-friendly statement as symptomatic of a confused mind.”

“Much of what rational thinking seems to do is rationalize one’s actions by fitting some logic to them.”

“In that sense the mental probabilistic map in one’s mind is so geared toward the sensational that one would realize informational gains by dispensing with the news… This is one of the many reasons that journalism may be the greatest plague we face today— as the world becomes more and more complicated and our minds are trained for more and more simplification.”

“For example, people fail to learn that their emotional reactions to past experiences (positive or negative) were short-lived— yet they continuously retain the bias of thinking that the purchase of an object will bring long-lasting, possibly permanent, happiness or that a setback will cause severe and prolonged distress (when in the past similar setbacks did not affect them for very long and the joy of the purchase was short-lived).”

“Our minds are not quite designed to understand how the world works, but, rather, to get out of trouble rapidly and have progeny. If they were made for us to understand things, then we would have a machine in it that would run the past history as in a VCR, with a correct chronology, and it would slow us down so much that we would have trouble operating.”

“A mistake is not something to be determined after the fact, but in the light of the information until that point.”

“A 15% return with a 10% volatility (or uncertainty) per annum translates into a 93% probability of success in any given year. But seen at a narrow time scale, this translates into a mere 50.02% probability of success over any given second as shown in Table 3.1. Over the very narrow time increment, the observation will reveal close to nothing. Yet the dentist’s heart will not tell him that… At the end of every day the dentist will be emotionally drained. A minute-by-minute examination of his performance means that each day (assuming eight hours per day) he will have 241 pleasurable minutes against 239 unpleasurable ones. These amount to 60,688 and 60,271, respectively, per year. Now realize that if the unpleasurable minute is worse in reverse pleasure than the pleasurable minute is in pleasure terms, then the dentist incurs a large deficit when examining his performance at a high frequency. Consider the situation where the dentist examines his portfolio only upon receiving the monthly account from the brokerage house. As 67% of his months will be positive, he incurs only four pangs of pain per annum and eight uplifting experiences. This is the same dentist following the same strategy. Now consider the dentist looking at his performance only every year. Over the next 20 years that he is expected to live, he will experience 19 pleasant surprises for every unpleasant one!”

“The road from $ 16 million to $ 1 million is not as pleasant as the one from 0 to $ 1 million. In addition, John is full of shame; he still worries about running into old friends on the street.”

“What is also interesting is that he discovered that we are designed by mother nature to have an extremely skewed physical workout: Hunter-gatherers had idle moments followed by bursts of intense energy expenditure. At sixty-five, Art is said to have the physique of a man close to half his age.”

“If one puts an infinite number of monkeys in front of (strongly built) typewriters, and lets them clap away, there is a certainty that one of them would come out with an exact version of the Iliad. Upon examination, this may be less interesting a concept than it appears at first: Such probability is ridiculously low. But let us carry the reasoning one step beyond. Now that we have found that hero among monkeys, would any reader invest his life’s savings on a bet that the monkey would write the Odyssey next?”

“The first counterintuitive point is that a population entirely composed of bad managers will produce a small amount of great track records.”

“Nobody accepts randomness in their successes, only their failures.”

“A single random run is bound to exhibit some pattern— if one looks hard enough.”

“There may be great information in the fact that nothing took place. As Sherlock Holmes noted in the Silver Blaze case— the curious thing was that the dog did not bark. More problematic, there are plenty of scientific results that are left out of publications because they are not statistically significant, but nevertheless provide information.”

“…Book sales witness a similar effect, exploding once they cross a significant level of word-of-mouth.”

“…it is easier for your brain to detect differences rather than absolutes, hence rich or poor will be (above the minimum level) in relation to something else”

““The average American is expected to live seventy-three years. Therefore if you are sixty-eight you can expect to live five more years, and should plan accordingly.” She went into precise prescriptions of how the person should invest for a five-more-years horizon. Now what if you are eighty? Is your life expectancy minus seven years?”

“Percentage moves are the size of the headlines. In addition, the interpretation is not linear; a 2% move is not twice as significant an event as 1%, it is rather like four to ten times. A 7% move can be several billion times more relevant than a 1% move! The headline of the Dow moving by 1.3 points on my screen today has less than one billionth of the significance of the serious 7% drop of October 1997.”

“The public person most visibly endowed with such a trait is George Soros. One of his strengths is that he revises his opinion rather rapidly, without the slightest embarrassment… What characterizes real speculators like Soros from the rest is that their activities are devoid of path dependence. They are totally free from their past actions. Every day is a clean slate.”

“My lesson from Soros is to start every meeting at my boutique by convincing everyone that we are a bunch of idiots who know nothing and are mistake-prone, but happen to be endowed with the rare privilege of knowing it.”

“The only article Lady Fortuna has no control over is your behavior. Good luck.”

“Another way to see the beastly aspect of schedules and rigid projections is to think in limit situations. Would you like to know with great precision the date of your death? Would you like to know who committed the crime before the beginning of the movie? Actually, wouldn’t it be better if the length of movies were kept a secret?”

“It took me an entire lifetime to find out what my generator is. It is: We favor the visible, the embedded, the personal, the narrated, and the tangible; we scorn the abstract. Everything good (aesthetics, ethics) and wrong (Fooled by Randomness) with us seems to flow from it.”