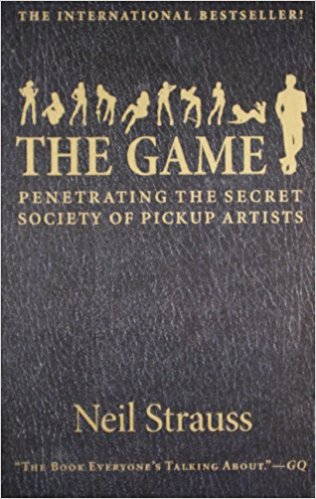 Great, compelling story. The parts on pickup and dating aren’t as good as a book like Models, but the story here is fantastic.

“Think of tonight as a video game. It is not real. Every time you do an approach, you are playing this game.”

““The number one characteristic of an alpha male is the smile,” he said, beaming an artificial beam. “Smile when you enter a room. As soon as you walk in a club, the game is on. And by smiling, you look like you’re together, you’re fun, and you’re somebody… Besides confidence and a smile, we learned, the other characteristics of an alpha male were being well-groomed, possessing a sense of humor, connecting with people, and being seen as the social center of a room.”

“the three-second rule. A man has three seconds after spotting a woman to speak to her, he said. If he takes any longer, then not only is the girl likely to think he’s a creep who’s been staring at her for too long, but he will start overthinking the approach, get nervous, and probably blow it.”

““Never,” Sin admonished me in his adenoidal voice, “approach a woman from behind. Always come in from the front, but at a slight angle so it’s not too direct and confrontational. You should speak to her over your shoulder, so it looks like you might walk away at any minute.”

“Women are sick of generic guys asking the same generic questions: “So where are you from?… What do you do for work?” With our patterns, gimmicks, and routines, we were barroom heroes, saving the female of the species from certain ennui.”

“The PUAs have a name for this: They call it one-itis. It’s a disease AFCs get: They become obsessed with a girl they’re neither dating nor sleeping with, and then start acting so needy and nervous around her that they end up driving her away.”

“…lions bite each other’s mane during sex, and how pulling the back of the hair is another evolutionary trigger.”

“Most men make the mistake of believing that an attractive woman who doesn’t talk to or acknowledge him is a bitch. Most of the time, however, she’s just as shy or insecure as the less attractive women he’s ignoring— if not more so.”

“In some respects, surfing reminded me of sarging. Some days you go out and catch every wave and think you’re a champ; other days you don’t get one good wave and you think you suck. But no matter what, every day you go out and you learn and you improve. And that’s what keeps you coming back.”

“The key to physical escalation, David DeAngelo had said in his seminar, is always two steps forward, one step back.”

“And as a knight he has been trained to observe a strict code of conduct, which includes the rule of never asking questions or speaking unless he is addressed first. So he goes to bed without talking to the king. In the morning, he wakes to discover that the grail castle has disappeared. He has blown his chance to save king and country by obeying his training instead of his heart. Unlike the scorpion, Parsifal had a choice. He just made the wrong one.”

The Way of the Superior Man by David Deida