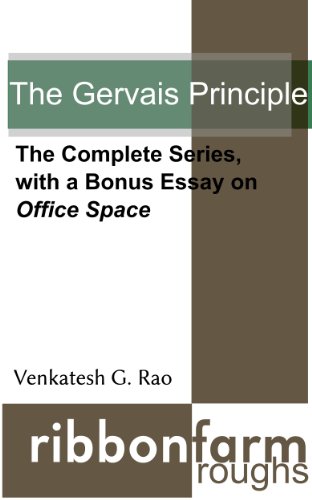 In this series of essays, Venkatesh explores the workings of organizations through the lens of The Office. I enjoyed the earlier essays about the Sociopath / Loser / Clueless dynamic, but didn’t get into the later parts as much.

The Losers are not social losers (as in the opposite of “cool”), but people who have struck bad bargains economically – giving up capitalist striving for steady paychecks.

A Sociopath with an idea recruits just enough Losers to kick off the cycle. As it grows, it requires a Clueless layer to turn it into a controlled reaction, rather than a runaway explosion. Eventually, as value hits diminishing returns, both the Sociopaths and Losers make their exits, and the Clueless start to dominate. Finally, the hollow brittle shell collapses on itself, and anything of value is recycled by the Sociopaths, according to meta-firm logic.

They mortgage their lives away, and hope to die before their money runs out. The good news is that Losers have two ways out, which we’ll get to later: turning Sociopath or turning into bare-minimum performers. The Losers destined for Cluelessness do not have a choice.

The Clueless are the ones who lack the competence to circulate freely through the economy (unlike Sociopaths and Losers), and build up a perverse sense of loyalty to the firm, even when events make it abundantly clear that the firm is not loyal to them. To sustain themselves, they must be capable of fashioning elaborate delusions based on idealized notions of the firm

The Peter Principle states that all people are promoted to the level of their incompetence. It is based on the assumption that future promotions are based on past performance.

So why is promoting over-performing Losers logical? The simple reason is that if you over-perform at the Loser level, it is clear that you are an idiot. You’ve already made a bad bargain, and now you’re delivering more value than you need to, making your bargain even worse. Unless you very quickly demonstrate that you know your own value by successfully negotiating more money and/or power, you are marked out as an exploitable clueless Loser.

The career of the Loser is the easiest to understand. Having made a bad bargain, and not marked for either Clueless or Sociopath trajectories, he or she must make the best of a bad situation. The most rational thing to do is slack off and do the minimum necessary. Doing more would be a Clueless thing to do. Doing less would take the high-energy machinations of the Sociopath, since it sets up self-imposed up-or-out time pressure. So the Loser – really not a loser at all if you think about it – pays his dues, does not ask for much, and finds meaning in his life elsewhere.

This helps us understand how the world works, but not how to work it. So let me introduce you to the main skill required here: mastery over the four major languages spoken in organizations. I’ll call the four languages Posturetalk, Powertalk, Babytalk and Gametalk.

Eric Berne’s Games People Play and What Do You Say after You Say Hello, and Thomas Harris’ I’m OK–You’re OK. (Yes, they’re dated, and have been parodied to the point that they seem campy today. No, that does not mean they are useless. Yes, you need a brain to read them critically today. Add these three books to the two I already referenced, The Organization Man and Images of Organization.)

Gametalk is all about multiple (usually two) levels of communication. What distinguishes Powertalk is that with every word uttered, the power equation between the two speakers shifts just a little. Sometimes both gain slightly, at the expense of some poor schmuck. Sometimes one yields ground to the other. Powertalk in other words, is a consequential language.

There is a reason I used an analogy to vocabularies earlier. Remember those kids who earnestly memorized words for their SATs and the GRE? Notice any of them winning Nobel Prizes in literature? Vocabulary expansion efforts can at best put the finishing touches on organically acquired language skills. There is no shortcut to organic language acquisition; reading well-written stuff and writing constantly are the only way.

If the situational developmental gap between two people is sufficiently small, the more evolved person will systematically lose more often than they win.

This is the Curse of Development. When you develop psychologically, and leave somebody behind, your odds of winning get worse before they get better.

Your development is arrested by your strengths, not your weaknesses. Arrested-development behavior is caused by a strength-based addiction. The mediocre develop faster than either the talented or the untalented.

Recall that Cluelessness goes with overperformance. That overperformance is caused by arrested development around a strength, which has been hooked by an addictive environment of social rewards. Mediocrity is your best defense against addiction, and guarantor of further open-ended psychological development.

The less-developed person does not know what he/she does not know, and is typically attempting to operate from their regressed comfort zone of strength, which to you represents a zone of unrewarding mediocrity that you are attempting to leave, or have already left behind. This lends your opponent confidence.

Your own knowledge is fresh, unstable and not yet ingrained as second nature. You are acutely aware of, and anxious about, your beginner status in your new level. This makes you lack confidence.

Social clubs of any sort divide the world into an us and a them. We are better than them. Any prospective new member who could raise the average prestige of a club is, by definition, somebody who is too good for that club.

A makes a joke at B’s expense. Without C present, you’d get Clueless dynamics. But if C is present, and he laughs, he bonds with the joke-teller and creates social capital in the bond of trust betwen them. If he frowns or otherwise indicates that the joke was in bad taste, he bonds with the victim and creates capital there. And crucially, if he does not react, no social capital is created at all.

Clueless jokes are zero-sum, but Loser jokes are actually non-zero-sum. This does not mean they are win-win. This is a variety of non-zero-sum called mutual exploitation, that is sadly under-studied by game theorists. It simply means you can create net positive value by taking turns beating each other up competitively (aside for game-theory geeks: in the iterated prisoner’s dilemma, you get mutual exploitation by breaking the constraint that the cooperation payoff must be higher than the average of the defection and sucker payoffs). You can also create net-negative toxic non-zero-sum outcomes.

Hanlon’s Razor: never attribute to malice what can be adequately explained by stupidity.

When ends are defensible, but means are not, Sociopaths feign incompetence, and you get the first kind of Hanlon Dodge.

When means are defensible, but ends are not, Sociopaths engineer execution failures via indirection and abstraction in the requests they make, thereby achieving their ends via “lucky accidents.” This is the second kind of Hanlon Dodge.

In summary, seasoned Sociopaths maintain a permanent facade of strategic incompetence and ignorance in key areas, rather than just making up situational incompetence arguments. This is coupled with indirection and abstraction in requests given to reports. The result is HIWTYL judo.

That is what Sociopaths ultimately do with their lives if they survive long enough: generate amoral power from increasing inner emptiness, transforming themselves into forces of nature.