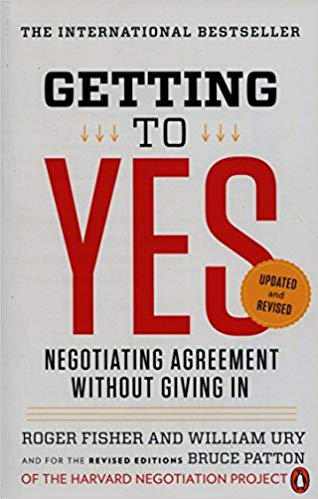 The best book on negotiation and effective argumentation. Useful even if you’re not in business, since in some form, you’re always negotiating.

Any method of negotiation should be judged by three criteria:

The more you clarify your position and defend it against attack, the more committed you become to it

Arguing over positions is inefficient

When there are many parties, positional bargaining is even worse

“Being Nice” isn’t the answer either

People: Separate the people from the problem

Prevention is the best method

Interests: Focus on interests, not positions

How do you identify interests?

Options: Invent multiple options looking for mutual gains before deciding what to do

To invent creative options, then you will need to:

Brainstorm with the other side too

Criteria: Insist that the result be based on some objective standard

Best Alternative to a Negotiated Agreement

The cost of using a bottom line

Formulate a trip-wire to activate your BATNA

Negotiation Jujitsu, for When They Won’t Play

How do you prevent the cycle of action and reaction? Don’t push back

Do not attack their position, look behind it

What if they use dirty tricks?

“Take it or leave it”

Don’t be a victim