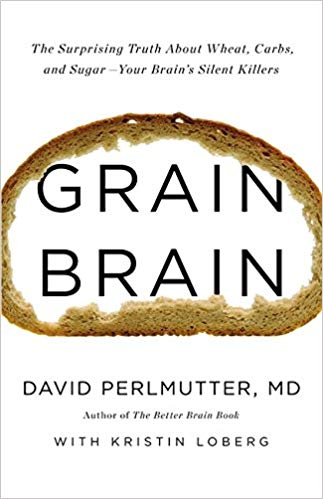 I think this book is, maybe, a little over the top, but it’s compelling. Grains = bad. Especially gluten. Also sugar. Cut them out. Any argument to the contrary is of the “you can’t prove that’s bad” vs “that’s good” variety.

“We are increasingly challenging our physiology with ingredients for which we are not genetically prepared… Gluten is what I call a “silent germ.” It can inflict lasting damage without your knowing it.”

“The origin of brain disease is in many cases predominantly dietary. Although several factors play into the genesis and progression of brain disorders, to a large extent numerous neurological afflictions often reflect the mistake of consuming too many carbs and too few healthy fats.”

“As many as 40 percent of us can’t properly process gluten, and the remaining 60 percent could be in harm’s way. The question we need to be asking ourselves: What if we’re all sensitive to gluten from the perspective of the brain?”

“Researchers have known for some time now that the cornerstone of all degenerative conditions, including brain disorders, is inflammation. But what they didn’t have documented until now are the instigators of that inflammation— the first missteps that prompt this deadly reaction. And what they are finding is that gluten, and a high-carbohydrate diet for that matter, are among the most prominent stimulators of inflammatory pathways that reach the brain.”

“Study after study shows that high cholesterol reduces your risk for brain disease and increases longevity. By the same token, high levels of dietary fat (the good kind, no trans fats here) have been proven to be key to health and peak brain function.”

“You’ll soon see that we’ve been barking up the wrong tree— blaming cholesterol, and LDL especially, when coronary artery disease has more to do with oxidized LDL. And how does LDL become so damaged that it’s no longer able to deliver cholesterol to the brain? One of the most common ways is through physical modification by glucose. Sugar molecules attach themselves to LDL and change the molecule’s shape, rendering it less useful while increasing free radical production.”

“Nothing could be further from the truth than the myth that if we lower our cholesterol levels we might have a greater chance of living longer and healthier lives. In a recent report appearing in the prestigious medical journal the Lancet, researchers from the Netherlands studied 724 elderly individuals whose average age was eighty-nine years and followed them for ten years. 12 What they found was truly extraordinary. During the study, 642 participants died. Each thirty-nine-point increase in total cholesterol corresponded to a 15 percent decrease in mortality risk. In the study, there was absolutely no difference in the risk of dying from coronary artery disease between the high-versus low-cholesterol groups, which is incredible when you consider the number of elderly folks who are taking powerful cholesterol-lowering drugs.”

“In fact, when you compare the lowest- and highest-cholesterol groups, the risk of dying during the study was reduced by a breathtaking 48 percent in those who had the highest cholesterol. High cholesterol can extend longevity.”

“in 1994, when the American Diabetes Association recommended that Americans should consume 60 to 70 percent of their calories from carbohydrates, rates of diabetes exploded. In fact, the number of cases of diabetes in this country actually doubled between 1997 and 2007.21 Take a look at the rapid upward slope from 1980 through 2011, during which the number of Americans diagnosed with diabetes more than tripled:”

“A most disturbing finding was made by Japanese researchers in 2011 when they looked at 1,000 men and women over age sixty and found that “people with diabetes were twice as likely as the other study participants to develop Alzheimer’s disease within fifteen years. They were also 1.75 times more likely to develop dementia of any kind.””

“One of the most pervasive myths I’m constantly debunking is the notion that the brain prefers glucose for fuel. This also couldn’t be further from the truth. The brain uses fat exceptionally well; it is considered a brain “superfuel.” This is why we use a fat-based diet as therapy for all manner of neurodegenerative diseases”

“If you deprive cholesterol from the brain, then you directly affect the machinery that triggers the release of neurotransmitters. Neurotransmitters affect the data-processing and memory functions. In other words— how smart you are and how well you remember things. If you try to lower the cholesterol by taking medication that is attacking the machinery of cholesterol synthesis in the liver, that medicine goes to the brain too. And then it reduces the synthesis of cholesterol, which is necessary in the brain. Our study shows there is a direct link between cholesterol and the neurotransmitter release, and we know exactly the molecular mechanics of what happens in the cells. Cholesterol changes the shape of the proteins to stimulate thinking and memory.”

“Unless you have healthy testosterone levels (this goes for both men and women), you’re not going to have a hot sex life, if any at all. And what makes testosterone? Cholesterol. What are millions of Americans doing today? Lowering their cholesterol levels.”

“Those carbs, especially the ones in leafy green vegetables such as broccoli and spinach, are tied up with indigestible fiber, so they take longer to break down. The fiber essentially slows down the process, causing a slower funneling of glucose into the bloodstream. Plus, vegetables contain more water relative to their weight than starches, and this further dampens the blood sugar response. When we eat whole fruits, which obviously contain fruit sugar, the water and fiber will also “dilute” the blood sugar effect. If you take, for instance, a peach and a baked potato of equal weight, the potato will have a much bigger effect on blood sugar than the watery, fibrous peach. That’s not to say the peach, or any other fruit for that matter, won’t cause problems.”

“Our caveman ancestors did in fact eat fruit, but not every day of the year. We haven’t yet evolved to be able to handle the copious amounts of fructose we consume today— especially when we get our fructose from manufactured sources. Natural fruit has relatively little sugar, when compared to, say, a can of regular soda, which has a massive amount. A medium-sized apple contains about 44 calories of sugar in a fiber-rich blend thanks to the pectin; conversely, a 12-ounce can of Coke or Pepsi contains nearly twice that— 80 calories of sugar. If you juice several apples and concentrate the liquid down to a 12-ounce beverage (thereby losing the fiber), lo and behold you get a blast of 85 sugar calories that could just as well have come from a soda.”

“But most of us assume, wrongly, that with age comes cognitive decline. We think it’s an inevitable part of aging, much like hearing loss or wrinkles. This impression is a pernicious fallacy. The truth is that we’re living a life that’s not suited to what we’re genetically supposed to do. Period. The diseases we see nowadays are largely brought on by our lifestyle not being in harmony with our genetic predisposition. But we can change this and return our DNA back to its original programming. Better yet, we can re-program some of our DNA to function even more advantageously. And this isn’t science fiction.”

The Straight Dope on Cholesterol by Peter Attia

Own the Day Own Your Life by Aubrey Marcus