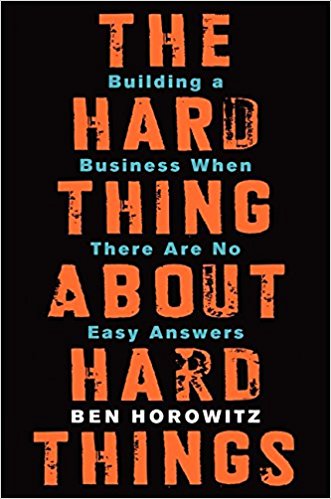 A fantastic resource for someone starting a company, and especially growing one. The nice thing about this book is that it’s less on “starting a startup” and more on all the hard parts that come after, which is a refreshing change.

“There are no shortcuts to knowledge, especially knowledge gained from personal experience. Following conventional wisdom and relying on shortcuts can be worse than knowing nothing at all.”

“Former secretary of state Colin Powell says that leadership is the ability to get someone to follow you even if only out of curiosity.”

“During this time I learned the most important rule of raising money privately: Look for a market of one. You only need one investor to say yes, so it’s best to ignore the other thirty who say “no.””

“No matter who you are, you need two kinds of friends in your life. The first kind is one you can call when something good happens, and you need someone who will be excited for you. Not a fake excitement veiling envy, but a real excitement. You need someone who will actually be more excited for you than he would be if it had happened to him. The second kind of friend is somebody you can call when things go horribly wrong— when your life is on the line and you only have one phone call. Who is it going to be? Bill Campbell is both of those friends.”

“An early lesson I learned in my career was that whenever a large organization attempts to do anything, it always comes down to a single person who can delay the entire project.”

“Startup CEOs should not play the odds. When you are building a company, you must believe there is an answer and you cannot pay attention to your odds of finding it. You just have to find it. It matters not whether your chances are nine in ten or one in a thousand; your task is the same.”

“Sadly, there is no secret, but if there is one skill that stands out, it’s the ability to focus and make the best move when there are no good moves.”

“My single biggest personal improvement as CEO occurred on the day when I stopped being too positive.”

““We take care of the people, the products, and the profits— in that order.” It’s a simple saying, but it’s deep. “Taking care of the people” is the most difficult of the three by far and if you don’t do it, the other two won’t matter. Taking care of the people means that your company is a good place to work. Most workplaces are far from good. As organizations grow large, important work can go unnoticed, the hardest workers can get passed over by the best politicians, and bureaucratic processes can choke out the creativity and remove all the joy.”

“Given this stress, CEOs often make one of the following two mistakes: 1. They take things too personally. 2. They do not take things personally enough.”

“As CEO, there will be many times when you feel like quitting. I have seen CEOs try to cope with the stress by drinking heavily, checking out, and even quitting. In each case, the CEO has a marvelous rationalization about why it was okay for him to punk out or quit, but none of them will ever be great CEOs. Great CEOs face the pain. They deal with the sleepless nights, the cold sweats, and what my friend the great Alfred Chuang (legendary cofounder and CEO of BEA Systems) calls “the torture.” Whenever I meet a successful CEO, I ask them how they did it. Mediocre CEOs point to their brilliant strategic moves or their intuitive business sense or a variety of other self-congratulatory explanations. The great CEOs tend to be remarkably consistent in their answers. They all say, “I didn’t quit.””

“Watered-down feedback can be worse than no feedback at all because it’s deceptive and confusing to the recipient. But don’t beat them up or attempt to show your superiority. Doing so will defeat your purpose because when done properly, feedback is a dialogue, not a monologue.”

The 4-Hour Workweek by Timothy Ferriss