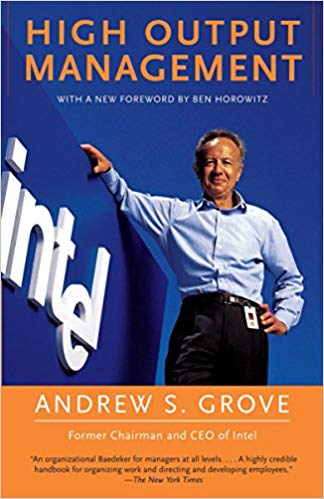 A phenomenal book for any current or future manager to read, even if you don’t have anyone working for you yet. It’s very accessible and has lots of good example processes to follow, it’s a book I revisit frequently.

The motto I'm advocating is "Let chaos reign, then rein in chaos."

The output of a manager is the output of the organizational units under his or her supervision or influence.

Second, a responsive company should have fewer levels of managers.

Finally, he reiterates his thesis that there are only two ways in which a manager can impact an employee's output: motivation and training. If you are not training, then you are basically neglecting half the job. - Ben Horowitz...

The first thing we must do is to pin down the step in the flow that will determine the overall shape of our operation, which we'll call the limiting step. The issue here is simple: which of the breakfast components takes the longest to prepare? Because the coffee is already steaming in the kitchen and the toast takes only about a minute, the answer is obviously the egg, so we should plan the entire job around the time needed to boil it. Not only does that component take the longest to prepare, the egg is also for most customers the most important feature of the breakfast.

As the manager, you could add another toaster, but this becomes an expensive addition of capital equipment. You could run the toaster continuously and build up an inventory of hot toast, throwing away what you can't use but always having immediate access to product. That means waste, which can also become too expensive for the operation. But at least you know that alternatives do exist: equipment capacity, manpower, and inventory can be traded off against each other and then balanced against delivery time. [[The Goal]]

A common rule we should always try to heed is to detect and fix any problem in a production process at the lowest-value stage possible. Thus, we should find and reject the rotten egg as it's being delivered from our supplier rather than permitting the customer to find it.

But to run your operation well, you will need a set of good indicators, or measurements.

...a genuinely effective indicator will cover the output of the work unit and not simply the activity involved. Obviously, you measure a salesman by the orders he gets (output), not by the calls he makes (activity).

Ideally, [[Inventory]] should be kept at the lowest-value stage, as we've learned before, like raw eggs kept at the breakfast factory. Also, the lower the value, the more production flexibility we obtain for a given inventory cost. #[[The Goal]] #[[Cash Flow]]

This is called work simplification. To get leverage this way, you first need to create a flow chart of the production process as it exists. Every single step must be shown on it; no step should be omitted in order to pretty things up on paper. Second, count the number of steps in the flow chart so that you know how many you started with. Third, set a rough target for reduction of the number of steps. In the first round of work simplification, our experience shows that you can reasonably expect a 30 to 5o percent reduction.

So no matter what reason may be given for a step, you must critically question each and throw out those that common sense says you can do without.

...information-gathering is the basis of all other managerial work, which is why I choose to spend so much of my day doing it.

How you handle your own time is, in my view, the single most important aspect of being a role model and leader.

Managerial meddling is also an example of negative leverage. This occurs when a supervisor uses his superior knowledge and experience of a subordinate's responsibilities to assume command of a situation rather than letting the subordinate work things through himself.

These time-management suggestions can be improved upon, I think, by applying our production principles. First, we must identify our limiting step: what is the "egg" in our work?

To gain better control of his time, the manager should use his calendar as a "production" planning tool, taking a firm initiative to schedule work that is not time-critical between those "limiting steps" in the day.

...as a rule of thumb, if a manager is both a hierarchical supervisor and a supplier of know-how, he should try to have a total of six to eight subordinates or their equivalent.

Thus I will assert again that a meeting is nothing less than the medium through which managerial work is performed. That means we should not be fighting their very existence, but rather using the time spent in them as efficiently as possible.

What should be covered in a one-on-one? We can start with performance figures, indicators used by the subordinate, such as incoming order rates, production output, or project status. Emphasis should be on indicators that signal trouble. The meeting should also cover anything important that has happened since the last meeting: current hiring problems, people problems in general, organizational problems and future plans, and-very, very important-potential problems.

How is this done? By applying Grove's Principle of Didactic Management, "Ask one more question!" When the supervisor thinks the subordinate has said all he wants to about a subject, he should ask another question. He should try to keep the flow of thoughts coming by prompting the subordinate with queries until both feel satisfied that they have gotten to the bottom of a problem.

But in the end self-confidence mostly comes from a gut-level realization that nobody has ever died from making a wrong business decision, or taking inappropriate action, or being overruled.

Finally, remember that by saying “yes"-to projects, a course of action, or whatever-you are implicitly sayıng "no" to something else. Each time you make a commitment, you forfeit your chance to commit to something else.

...management by objectives-MBO–concentrates on steps 2 and 8 of the planning process and tries very hard to make them specific. The idea behind MB is extremely simple: If you don't know where you're going, you will not get there.

A successful MBO system needs only to answer two questions: 1. Where do I want to go? (The answer provides the objective. ) 2. How will I pace myself to see if I am getting there? (The answer gives us milestones or key results).

When a person is not doing his job, there can only be two reasons for it. The person either can't do it or won't do it; he is either not capable or not motivated. To determine which, we can employ a simple mental test: if the person's life depended on doing the work, could he do it?

Some researchers in this field argue that there is a fundamental variable that tells you what the best management style is in a particular situation. That variable is the task-relevant maturity (TRM) of the subordinates, which is a combination of the degree of their achievement orientation and readiness to take responsibility, as well as their education, training, and experience.

The conclusion is that varying management styles are needed as task-relevant maturity varies. Specifically, when the TRM is low, the most effective approach is one that offers very precise and detailed instructions, wherein the supervisor tells the subordinate what needs to be done, when, and how: in other words, a highly structured approach. As the TRM of the subordinate grows, the most effective style moves from the structured to one more given to communication, emotional support, and encouragement, in which the manager pays more attention to the subordinate as an individual than to the task at hand. As the TRM becomes even greater, the effective management style changes again. Here the manager's involvement should be kept to a minimum, and should primarily consist of making sure that the objectives toward which the subordinate is working are mutually agreed upon.

As supervisors, we should try to raise the task-relevant maturity of our subordinates as rapidly as possible for obvious pragmatic reasons. The appropriate management style for an employee with high TRM takes less time than detailed, structured, supervision requires. Moreover, once operational values are learned and TRM is high enough, the supervisor can delegate tasks to the subordinate, thus increasing his managerial leverage. Finally, at the highest levels of TRM, the subordinate's training is presumably complete, and motivation is likely to come from within, from self-actualization, which is the most powerful source of energy and effort a manager can harness.

In my experience, the best thing to do is to give your subordinate the written review sometime before the face-to-face discussion. He can then read the whole thing privately and digest it. He can react or overreact and then look at the "messages'" again. By the time the two of you get together, he will be much more prepared, both emotionally and rationally.

Insufficiently trained employees, in spite of their best intentions, produce inefficiencies, excess costs, unhappy customers, and sometimes even dangerous situations. The importance of training rapidly becomes obvious to the manager who runs into these problems.
...make a list of the things you feel your subordinates or the members of your department should be trained in. Don't limit the scope of your list. Items should range from what seems simple (training the person who takes calls at the restaurant) to loftier and more general things like the objectives and value systems of your department, your plant, and your company.