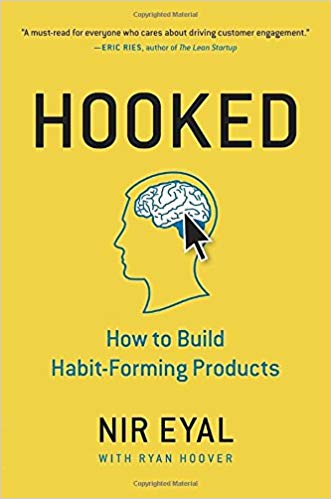 A useful tool for brainstorming how to make your products more habit forming, and thus addictive.

“Today, small startup teams can profoundly change behavior by guiding users through a series of experiences I call “hooks.” The more often users run through these hooks, the more likely they are to form habits.”

“However, add some variability to the mix — say a different treat magically appears in your fridge every time you open it — and voila, intrigue is created. Variable rewards are one of the most powerful tools companies implement to hook users;”

“For example, in the free-to-play video game business, it is standard practice for game developers to delay asking users to pay money until they have played consistently and habitually. Once the compulsion to play is in place and the desire to progress in the game increases, converting users into paying customers is much easier. Selling virtual items, extra lives, and special powers is where the real money lies.”

“A company can begin to determine its product’s habit-forming potential by plotting two factors: frequency (how often the behavior occurs) and perceived utility (how useful and rewarding the behavior is in the user’s mind over alternative solutions).”

“Gatekeepers such as investors and managers want to invest in solving real problems — or, meeting immediate needs — by backing painkillers. Painkillers solve an obvious need, relieving a specific pain and often have quantifiable markets. Think Tylenol, the brand name version of acetaminophen, and the product’s promise of reliable relief. It’s the kind of ready-made solution for which people are happy to pay. In contrast, vitamins do not necessarily solve an obvious pain-point. Instead they appeal to users’ emotional rather than functional needs. When we take our multivitamin each morning, we don’t really know if it is actually making us healthier. In fact, recent evidence shows taking multivitamins may actually be doing more harm than good.”

““We identified several features of Internet usage that correlated with depression,” wrote Sriram Chellappan, one of the study’s authors. “For example, participants with depressive symptoms tended to engage in very high email usage… Other characteristic features of depressive Internet behavior included increased amounts of video watching, gaming and chatting.””

“When it comes to figuring out why people use habit-forming products, internal triggers are the root cause, and “why?” is a question that can help drill right to the core.”

“Fogg posits that there are three ingredients required to initiate any and all behaviors: (1) the user must have sufficient motivation; (2) the user must have the ability to complete the desired action; and (3) a trigger must be present to activate the behavior.”

“Two groups of customers were given punch cards awarding a free car wash once the cards were fully punched. One group was given a blank punch card with 8 squares and the other given a punch card with 10 squares but with two free punches. Both groups still had to purchase 8 car washes to receive a free wash; however, the second group of customers — those that were given two free punches — had a staggering 82 percent higher completion rate. The study demonstrates the endowed progress effect, a phenomenon that increases motivation as people believe they are nearing a goal.”

“The more users invest time and effort into a product or service, the more they value it. In fact, there is ample evidence to suggest that our labor leads to love.”

Hello My Name is Awesome by Alexandra Watkins