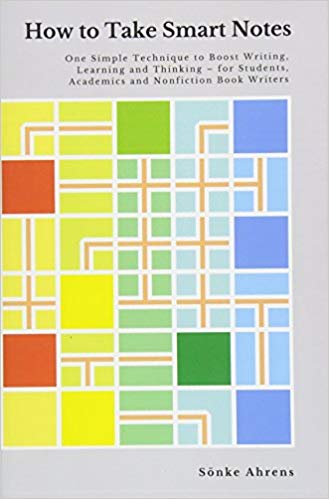 An excellent intro guide to the "Zettlekasten" method you can use to take useful notes from everything you read. Strong recommend for improving your note taking and the usefulness of everything you're reading.

There is another reason that note-taking flies mostly under the radar: We don't experience any immediate negative feedback if we do it badly. But without an immediate experience of failure, there is also not much demand for help.

Few struggle to text their friends or write emails. The rules of citation can be looked up and there is no way that there are as many mental issues as papers postponed. Most people struggle for much more mundane reasons, and one is the myth of the blank page itself. They struggle because they believe, as they are made to believe, that writing starts with a blank page.

one idea, one note was only as valuable as its context, which was not necessarily the context it was taken from. So he started to think about how one idea could relate and contribute to different contexts.

Luhmann had two slip-boxes: a bibliographical one, which contained the references and brief notes on the content of the literature, and the main one in which he collected and generated his ideas, mainly in response to what he read.

If a new note was relevant or directly referred to an already existing note, such as a comment, correction or addition, he added it directly behind the previous note.

Make fleeting notes. Always have something at hand to write with to capture every idea that pops into your mind. Don't worry too much about how you write it down or what you write it on. These are fleeting notes, mere reminders of what is in your head. They should not cause any distraction. Put them into one place, which you define as your inbox, and process them later.

Make literature notes. Whenever you read something, make notes about the content. Write down what you don't want to forget or think you might use in your own thinking or writing. Keep it very short, be extremely selective, and use your own words. Be extra selective with quotesdon't copy them to skip the step of really understanding what they mean.

Luhmann never underlined sentences in the text he read or wrote comments in the margins. All he did was take brief notes about the ideas that caught his attention in a text on a separate piece of paper: "I make a note with the bibliographic details.

You may remember from school the difference between an exergonic and an endergonic reaction. In the first case, you constantly need to add energy to keep the process going. In the second case, the reaction, once triggered, continues by itself and even releases energy.

the mere copying of quotes almost always changes their meaning by stripping them out of context, even though the words aren't changed. This is a common beginner mistake, which can only lead to a patchwork of ideas, but never a coherent thought.

“I always have a slip of paper at hand, on which I note down the ideas of certain pages. On the backside I write down the bibliographic details. After finishing the book I go through my notes and think how these notes might be relevant for already written notes in the slip-box. It means that I always read with an eye towards possible connections in the slip-box."

Handwriting makes pure copying impossible, but instead facilitates the translation of what is said (or written) into one's own words. The students who typed into their laptops were much quicker, which enabled them to copy the lecture more closely but circumvented actual understanding. They focused on completeness. Verbatim notes can be taken with almost no thinking, as if the words are taking a short cut from the ear to the hand, bypassing the brain.

Rereading is especially dangerous because of the mere-exposure effect: The moment we become familiar with something, we start believing we also understand it. On top of that, we also tend to like it more

The way people choose their keywords shows clearly if they think like an archivist or a writer. Do they wonder where to store a note or how to retrieve it? The archivist asks: Which keyword is the most fitting? A writer asks: In which circumstances will I want to stumble upon this note, even if I forget about it? It is a crucial difference.

Good keywords are usually not already mentioned as words in the note.

A good rule of thumb for working with the program is: Each note should fit onto the screen and there should be no need of scrolling.

How We Learn by Benedict Carey

The Art of Learning by Josh Waitzkin