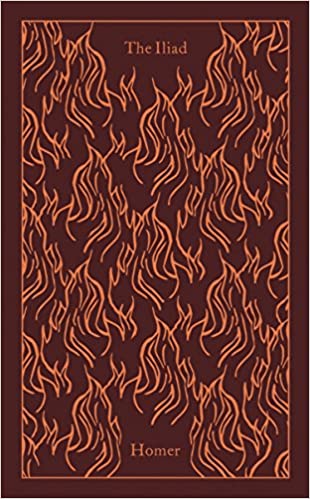 The story of Achilles's wrath during the battle of Troy. It lags for long parts but is interesting to read for the historical value.

Great Hector of the flashing helmet said:'Ajax, the god has given you size, strength and ability, and you are the best spearman on your side. Let us bring today's duel to an end. We can fight some other time, till the powers above decide between us, and one of us wins. Also, it is nearly dark. It is sensible to take that into account.'Then you will bring joy to the Greeks back at the ships, your friends and relatives above all; while I too shall get a warm welcome in lord Priam's town from the Trojans and the Trojan ladies in their trailing gowns, who will enter the sacred assembly to offer up prayers in my name. But first let us both exchange prestigious gifts, so that Trojans and Greeks alike can say:"These two fought each other in souldestroying combat, but were reconciled and parted friends.” (Page 122)

they waded into the sea to wash the sweat from their shins, neck and thighs. When the waves had removed the sweat from their bodies and they felt refreshed, they went and bathed themselves in polished baths. Then, after washing and covering themselves liberally with olive-oil, they sat down to eat, and from a full mixingbowl drew off sweet wine and poured libations to Athene. (Page 179)

Great Achilles lay spread out in the dust, a giant of a man, clawing at his hair with his hands and mangling it. The female slaves he and Patroclus had captured shrieked aloud and in their grief ran out of doors to surround warlike Achilles. They beat their breasts with their hands and sank to the ground. On the other side Antilochus, shedding tears of misery, gripped Achilles' hands. Achilles was sobbing out his noble heart, and Antilochus was afraid he might take a knife and cut his throat. (Page 320)

But let us call on the gods to witness an agreement: no compact could have better guarantors. If Zeus grants me staying-power and I kill you, I will not violently maltreat you. All I shall do, Achilles, is to strip you of your famous armour. Then I will give up your body to the Greeks. You do the same.Swift-footed Achilles gave him a black look and replied: 'Hector, I'm never going to forgive you. So don't talk to me about agreements. Lions don't come to terms with men, the wolf doesn't see eye to eye with the lamb - they are enemies to the end. It's the same and me. Friendship between us is impossible, and with you there will be no truce of any kind till one of us has fallen and glutted the shield-bearing god of battles with his blood.'So summon up all the courage you possess. This is the time to show your bravery and ability as a fighter. Not that anything is going to save you now, when Pallas Athene is waiting to bring down with my spear. (Page 387)

Achilles, respect the gods and have pity on me, remembering your own father. I am even more entitled to pity, since I have brought myself to do something no one else on earth has done I have raised to my lips the hands of the man who killed my sons.With these words he awoke in Achilles a longing to weep for his own father. Taking the old man's hand, Achilles gently put him from him, and they were both overcome by their memories: Priam, huddled at Achilles' feet, wept aloud for manslaying Hector, and Achilles wept for his father, and then again for Patroclus. The house was filled with the sounds of their lamentation. But when godlike Achilles had had enough of tears and the longing had ebbed from mind and body, he leapt at once from his chair and in compassion for the old man's grey head and grey beard took him by the arm and raised him. (Page 434)

The Celestine Prophecy by James Redfield