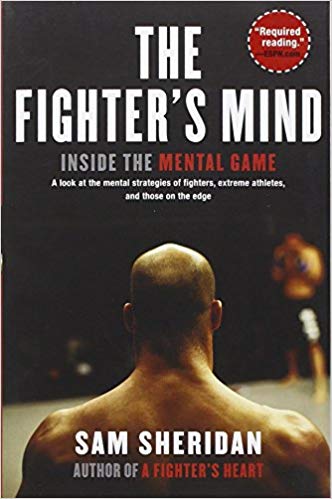 Found this hard to read, and got little from it. There are some nice quotations, though.

“”Men often become what they believe themselves to be. If I believe I cannot do something, it makes me incapable of doing it. But when I believe I can, then I acquire the ability.””

“You’ve got to have already done the thinking in the gym. In the fight, you can’t have your mind wrapped up. You can’t be thinking instead of fighting. It’s about reacting.”

“Successful fighters have things that work for them, and work incredibly well, but the great champions are those who can accept, cept, internalize, and understand defeat. Waitzkin’s tai chi teacher, the renowned William C. C. Chen (whom I studied with briefly), called this “investing in loss,” and it means study your defeat without out ego, let defeats happen in practice without reverting to your old habits, and then grow from it. It’s an essential skill, for even during a fight the fighter needs to be able to understand-and accept-when he is losing, and change his game plan. In order to win.”

“Marcelo, when he said “I just love it more,” was giving me the secret that there is no secret. His strength was in his joy in the game.”

“Miyamoto Musashi, perhaps the greatest swordsman in this era of great swordsmen, wrote a book on fighting and strategy called Go Rin No Sho (The Book of Five Rings).”

“”The body can always do more than the mind thinks it can. In the first year of the Trans-America, running from Los Angeles to New York, a young man got a stress fracture in Missouri and for a period of a couple weeks he still had to run the average of forty-five miles a day, and he was just barely making the cutoffs. But he made them. And toward the end his foot started recovering, ing, and he started running fast again.”

“Your body sends signals to your mind, It’s time to stop, let up, this doesn’t feel good, it HURTS! The mind has to override the signal.

“”There are two statements that I use,” he said. “The first is simple: this too shall pass. It will end. It can’t last forever … because sometimes things will feel that way.””

“The second one is very, very important: It never always gets worse,” he said, and paused, reverential. He wanted me to think about that one.

“You need to have a brutal honesty with yourself. Did I do everything possible to win that fight? What didn’t I do? And analyze lyze honestly, without bias, from a technical standpoint. And then ask yourself, `Did I do everything in my training to prepare?’

“Without a challenge, the top fighter has a hard time staying motivated, staying in the gym and doing what he needs to do. It’s fun at first, but after years and years of it, working out acquires a deadly dullness that needs a sharp point to pierce.”

“”False ideas about yourself can destroy you,” Frank said. “For me, I always stay a student. That’s what martial arts are about, and you have to use that humility as a tool. You put yourself beneath someone you trust. That’s extremely useful.”

“A bit like the poker saw, “If you can’t spot the sucker at the table in ten minutes then you’re the sucker.” In his book, josh talks about pondering Wu Yu-hsiang in a “typically abstract Chinese instructional conundrum”: If the opponent does not move, then I do not move. At the opponent’s slightest move, I move first.”

“You have to get down and dirty and battle with yourself. I am just like everyone else. My work can be great but I’m nothing special. If you don’t win that one, you’re finished as an artist, a student, a fighter. Josh won that battle, maybe his most important fight.”

“”Mental toughness is learned. It’s not a skill that everyone has, or is born with. There are people that are born tougher than others mentally, or figure things out earlier in their life. But if you have motivation you can acquire mental toughness, it’s just about what your body gets used to putting up with.”

“One of the surprising lessons of this research is that trying to force an insight can actually prevent vent the insight … Concentration comes with the hidden cost of diminished creativity.”