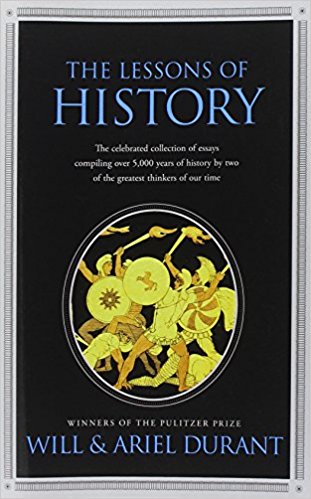 One of the most knowledge-dense books I’ve ever picked up. It’s short, but you’ll learn more than you expect about how trends of the past can influence our thinking about today.

The Biological lessons of history:

“The Greeks of Plato’s time behaved very much like the French of modern centuries; and the Romans behaved like the English. Means and instrumentalities change; motives and ends remain the same: to act or rest, to acquire or give, to fight or retreat, to seek association or privacy, to mate or reject, to offer or resent parental care.”

“Pugnacity, brutality, greed, and sexual readiness were advantages in the struggle for existence. Probably every vice was once a virtue— i.e., a quality making for the survival of the individual, the family, or the group. Man’s sins may be the relics of his rise rather than the stigmata of his fall.”

“A right is not a gift of God or nature but a privilege which it is good for the group that the individual should have.”

“When the group or a civilization declines, it is through no mystic limitation of a corporate life, but through the failure of its political or intellectual leaders to meet the challenges of change.”

Energy and Civilization by Vaclav Smil

Smoke Signals by Martin A. Lee

The Story of Philosophy by Will Durant