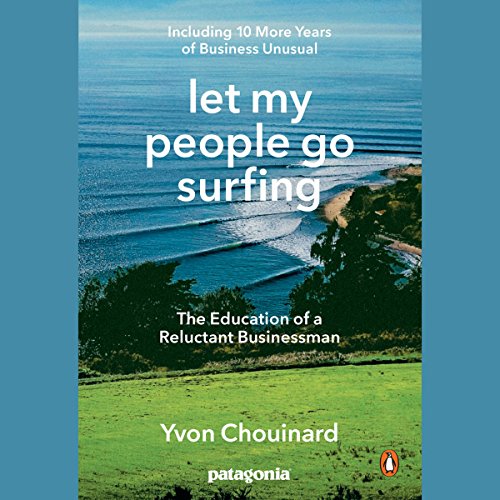 A really fun read on the history and philosophy behind Patagonia, and some of the decisions that have set them apart and made them such a successful, admirable brand.

I learned at an early age that it's better to invent your own game; then you can always be a winner. I found my games in the ocean, creeks, and hillsides surrounding Los Angeles.

Can a company that wants to make the best-quality outdoor clothing in the world be the size of Nike? Can a ten-table, three-star French restaurant retain its third star when it adds fifty tables? Can you have it all? The question haunted me throughout the 1980s as Patagonia evolved.

Our own company had exceeded its resources and limitations; we had become dependent, like the world economy, on growth we could not sustain. But as a small company we couldn't ignore the problem and wish it away. We were forced to rethink our priorities and institute new practices. We had to start breaking the rules.

For the most part the big problems have been solved, and there were no crises except those that were invented by management to keep the company in yarak, a falconry term meaning when your falcon is superalert, hungry, but not weak, and ready to hunt.

With clearly defined quality criteria for all aspects of a product, it becomes a straightforward matter to judge which are the best clothes-or automobiles, wines, or hamburgers.

People have too many choices these days. They are tired of constantly having to make decisions, particularly when it takes a major effort to make intelligent decisions-i.e., knowing the difference between all the breathable/waterproof fabrics. For most people, separating the men's styles from the women's is hard enough. The best restaurants in the world have set menus, and the best ski shops have already decided which skis are best for your skill or price level. The Dalai Lama says too much choice brings unhappiness.

Maintaining a sense of urgency throughout a company is one of the most difficult challenges in business. The problem is further compounded by having to depend on outside suppliers who may not have the same sense of expediency.

We should borrow and adapt ideas even from unlikely sources. McDonald's is as far from Patagonia as you can get in its image and many of its values. But I respect one thing it does. No one at McDonald's ever tells a customer, “Sorry, we're all out oficeberg lettuce today." It successfully organizes on-time delivery every day of the week, and I think Patagonia could learn a lesson from McDonald's and the symbiotic relationship it enjoys with its suppliers.

Slow growth or no growth means the profits have to come from our being more efficient every year. Unlike the government, we cannot rely on an expanding economy to “burn the fat away." It's easier for a company to make a profit when it's growing at 10 percent or 15 percent a year. We have been profitable in years when we grew only a few percent by increasing the quality of our product, maximizing the efficiency of our operations, and living within our means.

The ship's carpenter on Shackleton's lifeboat the James Caird took only three simple hand tools with him on the passage from Antarctica to South Georgia Island, knowing that, if he needed to, he could build another boat with only those tools. I believe the way toward mastery of any endeavor is to work toward simplicity; replace complex technology with knowledge. The more you know, the less you need. From my feeble attempts at simplifying my own life I've learned enough to know that should we have to, or choose to, live more simply, it won't be an impoverished life but one richer in all the ways that really matter.