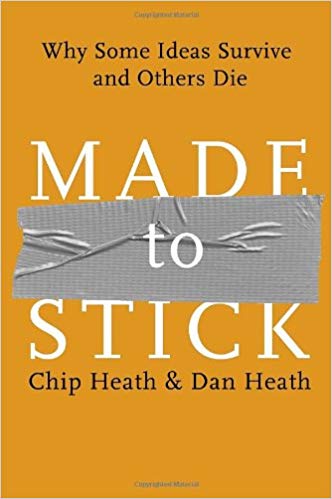 The best book I’ve found on crafting a compelling message. Useful for speaking, marketing, writing, any time you need to make people listen, believe, and act.

The SUCCESs Principle of stickiness:

“This is the Curse of Knowledge. Once we know something, we find it hard to imagine what it was like not to know it. Our knowledge has “cursed” us. And it becomes difficult for us to share our knowledge with others, because we can’t readily re-create our listeners’ state of mind.”

“The second villain is the tendency to focus on the presentation rather than on the message. Public speakers naturally want to appear composed, charismatic, and motivational. And, certainly, charisma will help a properly designed message stick better. But all the charisma in the world won’t save a dense, unfocused speech, as some Stanford students learn the hard way.”

“For an idea to stick, for it to be useful and lasting, it’s got to make the audience:

Problems and Answers plus an easy reference guide are in the back of the book.