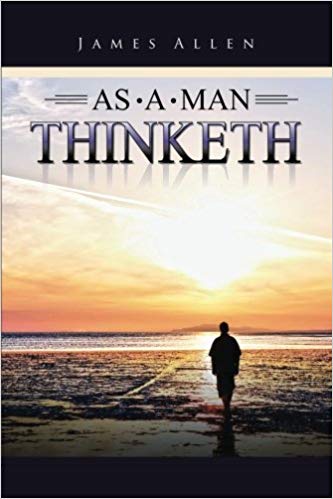 Short, you can read it in an hour, but a motivating meditation on the importance of “right thoughts.” The belief that powerful thoughts, pointed in the right direction, are the foundation and base on which all happiness and success is built. Reminds me of the power of affirmations.

“”As a man thinketh in his heart so is he,” not only embraces the whole of a man’s being, but is so comprehensive as to reach out to every condition and circumstance of his life. A man is literally what he thinks, his character being the complete sum of all his thoughts.”

“A noble and Godlike character is not a thing of favour or chance, but is the natural result of continued effort in right thinking, the effect of long-cherished association with Godlike thoughts.”

“Man is made or unmade by himself; in the armoury of thought he forges the weapons by which he destroys himself; he also fashions the tools with which he builds for himself heavenly mansions of joy and strength and peace.”

“MAN’S mind may be likened to a garden, which may be intelligently cultivated or allowed to run wild; but whether cultivated or neglected, it must, and will, bring forth. If no useful seeds are put into it, then an abundance of useless weed-seeds will fall therein, and will continue to produce their kind.”

“Man is buffeted by circumstances so long as he believes himself to be the creature of outside conditions, but when he realizes that he is a creative power, and that he may command the hidden soil and seeds of his being out of which circumstances grow, he then becomes the rightful master of himself.”

“Circumstance does not make the man; it reveals him to himself”

“A man only begins to be a man when he ceases to whine and revile, and commences to search for the hidden justice which regulates his life.”

“Clean thoughts make clean habits. The so-called saint who does not wash his body is not a saint. He who has strengthened and purified his thoughts does not need to consider the malevolent microbe.”

“He who cherishes a beautiful vision, a lofty ideal in his heart, will one day realize it.”

“And you, too, youthful reader, will realize the Vision (not the idle wish) of your heart, be it base or beautiful, or a mixture of both, for you will always gravitate toward that which you, secretly, most love.”

Love Yourself Like Your Life Depends on It by Kamal Ravikant