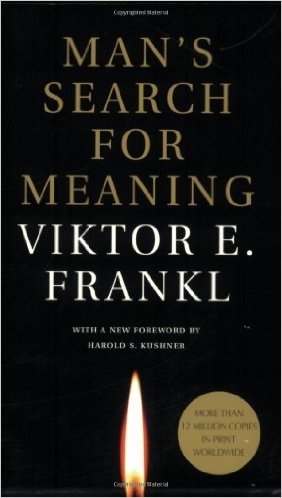 Broken into two distinct pieces, Frankl tells the story of his experience in Nazi concentration camps, and how that led to his theories on the importance of meaning in one’s life. It provides a compelling argument for each of us finding a reason to live, while reminding us of how terrible humans can be to one another.

“He who has a Why to live can bear almost any How.” (Nietzsche)

Life is primarily a quest for meaning, and that meaning can come about in one of three ways:

What humans need and want isn’t a complete release of tension and responsibility, but the pursuit of a worthwhile goal that they chose freely.

Most men give in to doing what other people are doing, or what others tell them to do.

“Live as if you were living already for the second time and as if you had acted the first time as wrongly as you are about to act now!”

“The more a man tries to demonstrate his sexual potency or a woman her ability to experience orgasm, the less they are able to succeed. Pleasure is, and must remain, a side-effect or by-product, and is destroyed and spoiled to the degree to which it is made a goal in itself.” Direct pursuit of a bodily or emotional goal can bring about its opposite.

“As we see, a human being is not one in pursuit of happiness but rather in search of a reason to become happy, last but not least, through actualizing the potential meaning inherent and dormant in a given situation.”

Discipline & Punish: The Birth of the Prison by Michael Foucault