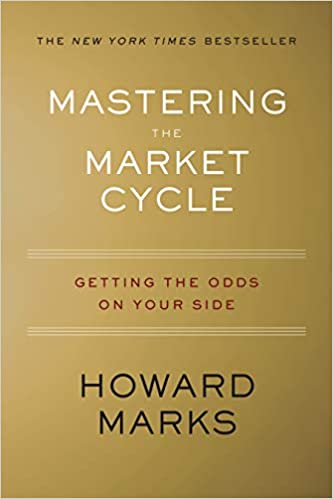 A good book on trying to get a sense of where you are in the broad cycles of the market. Skip to the last chapter and read that, then go forward for the parts you wanna go deeper on.

But all this being said, there doesn't have to be certainty in order for the game to be worth playing. A knowledge advantage regarding the tendencies is enough to create success in the long run. (Page 17)

Cycles are inevitable. Every once in a while, an up- or down-leg goes on for a long time and/or to a great extreme, and people start to say “this time it's different." They cite the changes in geopolitics, 66 UI institutions, technology or behavior that have rendered the “old rules" obsolete. They make investment decisions that extrapolate the recent trend. But then it usually turns out that the old rules do  still apply, and the cycle resumes. In the end, trees don't grow to the sky, and few things go to zero. Rather, most phenomena turn out to be cyclical. (Page 33)

the themes that provide warning signals in every boom/bust are the general ones: that excessive optimism is a dangerous thing; that risk aversion is an essential ingredient for the market to be safe; and that overly generous capital markets ultimately lead to unwise financing, and thus to danger for participants. (Page 36)

But whenever the pendulum is near either extreme, it is inevitable that it will move back toward the midpoint sooner or later. In fact, it is the movement toward an extreme itself that supplies the energy for the swing back. (Page 83)

For the bottom line of all this is that the greatest source of inme, vestment risk is the belief that there is no risk. Widespread risk tolerance– or a high degree of investor comfort with risk-is the greatest harbinger of subsequent market declines. But because most investors are following the progression described just above, this is rarely perceived at the time when perceiving it-and turning cautious-is most important. (Page 113)

During panics, people spend 100% of their time making sure there can be no losses at just the time that they should be worrying instead about missing out on great opportunities. (Page 132)

A high level of optimism is likely to mean the favorable possible developments have been priced in; the price is high relative to intrinsic value; and there's little margin for error in case of disappointment. But if optimism is low or absent, it's likely that the price is low; expectations are modest; negative surprises are unlikely; and the slightest turn for the better would result in appreciation. (Page 133)

The fluctuation-or inconstancy–in attitudes toward risk is both the result of some cycles and the cause or exacerbator of others. And it will always go on, since it seems to be hard-wired into most people's psyches to become more optimistic and risk-tolerant when things are going well, and then more worried and risk-averse when things turn downward. That means they're most willing to buy when they should be most cautious, and most reluctant to buy when they should be most aggressive. Superior investors recognize this and strive to behave as contrarians. (Page 135)

In short, conscientious belief in the inevitability of cycles like I'm urging means that a number of words and phrases must be excluded from the intelligent investor's vocabulary. These include “never," "always," "forever," “can't," "won't," "will" and "has to." (Page 180)

In other words, after failing to do the right thing in stage one, they compound the error by taking that action in stage three, when it has become the wrong thing to do. That's capitulation. It's a highly destructive aspect of investor behavior during cycles, and a great example of psychology-induced error at its worst. (Page 195)

The most important thing to note is that maximum psychology, maximum availability of credit, maximum price, minimum potential return and maximum risk all are reached at the same time, and usually these extremes coincide with the last paroxysm of buying. (Page 201)

At Oaktree, we strongly reject the idea of waiting for the bottom to start buying. (Page 236)

Keynes is reputed to have said: "The market can remain irrational longer than you can remain solvent." (Page 241)

Try to travel into the future and look back. In 2023, do think noá you're more likely to say, "Back in 2018, I wish I'd been more aggressive” or “Back in 2018, I wish I'd been more defensive"? And is there anything today about which you'd be likely to say, "In 2018, I missed the chance of a lifetime to buy xyz"? What you think you might say a few years down the road can help you figure out what you should do today. (Page 243)

There are three ingredients for success-aggressiveness, timing and skill and if you have enough aggressiveness at the right time, you don't need that much skill. (Page 246)

Superior investors are people who have a better sense for what tickets are in the bowl, and thus for whether it's worth participating in the lottery.In other words, while superior investors -like everyone else – don't know exactly what the future holds, they do have an above-average understanding of future tendencies. (Page 294)

The events in the life of a cycle shouldn't be viewed merely as each being followed by the next, but-much more importantly-as each causing the next. (Page 298)

Thus, the safest time to buy usually comes when everyone is convinced there's no hope. (Page 303)

Most raging bull markets are abetted by an upsurge in the willingness to provide capital, usually imprudently. Likewise, most collapses are preceded by a wholesale refusal to finance certain companies, industries, or the entire gamut of would-be borrowers. (Page 305)

In the absence of the ability to see the future, how can we position our portfolios for what lies ahead? I think much of the answer lies in understanding where the market stands in its cycle and what that implies for its future movements. As I wrote in The Most Important Thing, "we may never know where we're going, but we'd better have a good idea where we are." (Page 310)

The Most Important Thing by Howard Marks