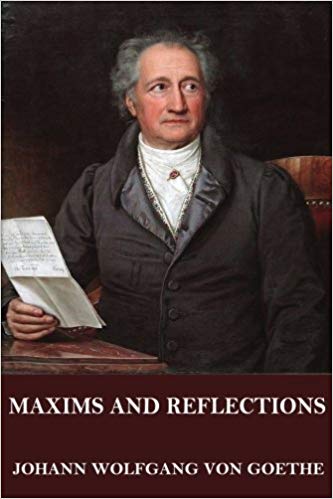 A book of aphorisms, it’s a useful tool for sparking your own clear thoughts.

“We suffer people to tell us about our shortcomings, we condone punishment, we patiently endure a good deal on their account; but we are impatient when we are urged to discard them.”

“It is the way of the world to accept a person as he presents himself; but he does have to present himself. We would rather tolerate a difficult person than suffer one who is insignificant.”

“We are never further away from our desires than when we imagine we possess what we desire.”

“If a person is to achieve all that others demand of him, he must consider himself more than he actually is.”

“Certain books are apparently written not so that we may learn from them, but to demonstrate the fact that the author knew something.”

“The greatest respect an author can have for his public is never to produce what is expected but what he himself considers right and useful for whatever stage of intellectual development has been reached by himself and others.”

“Anyone who doesn’t know foreign languages knows nothing of his own.”

“Some people keep knocking at the wall with a hammer and imagine they are hitting the nail on the head every time.”

“A state of affairs which leads to daily vexation is not the right state.”

“When a rainbow has lasted as long as a quarter of an hour we stop looking at it.”

“How can we learn self-knowledge? Never by taking thought but rather by action. Try to do your duty and you’ll soon discover what you’re like.”

“The longer I live, the more depressing I find the spectacle of a man, whose optimal function is to be a lord over nature so as to free himself and his fellow men from tyrannical necessity, doing the exact opposite of what he really wants to do, and all because of some preconceived false notion; and in the end, because the structure of the project as a whole has been ruined, he just muddles on miserably with odd details.”

“Tell me with whom you consort and I will tell you who you are; if I know how you spend your time, then I know what might become of you.”

“Nothing is more disagreeable than a majority; for it consists of a few powerful people in the lead, rogues who are adaptable, weak people who assimilate with the rest, and the crowd that trundles along behind without the slightest notion of what it’s after.”

“The great thing about the Ancients, especially the Socratic school, is that they set before us the sources and guidelines of all life and action, not for the purpose of idle speculation, but as a call to life and deeds.”

“‘Nothing in the world except health and virtue is more to be treasured than knowledge and learning; nor is anything so easily attainable and so cheap to acquire: all you have to do is to be still, all you have to spend is time, something we cannot save in any other way than by spending it.’”

“Many ideas appear only quite gradually like flowers opening out among the greenery of the branches. When roses are in season, one sees roses in bloom everywhere.”

“‘In the spring and autumn one doesn’t easily think about a fire on the hearth, and yet if we happen to see one in passing, we find the feeling it gives us so pleasant that we want to linger. This might be seen as analogous to any temptation.’”