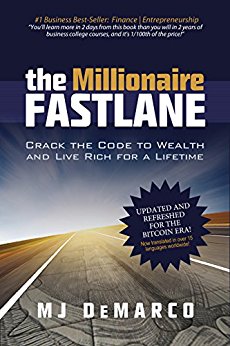 As a heuristic and set of ideas for distinguishing between the “slowlane” traditional wealth method and the “fastlane” superior method, it’s fantastic. I read it after I’d already internalized most of the ideas, but if you think working for 40 years and retiring on your 401k is a good idea, this book will be a useful wakeup call.

The first focus of the book is on distinguishing between the three different “roadmaps” to wealth.

Sidewalkers look for “big hits” like the lottery instead of building wealth-generating processes.

Three mindsets to get rid of to escape the sidewalk:

This is the path that most people are sold for becoming wealthy. Work hard for 40 years, put your money in index funds, retire when you’re 65.

Problems with the Slowlane mentality and working a job:

The distinctions between Slowlane and Fastlane Millionaires:

Slowlaners can’t control most of their variables (job, salary, ROI, etc.) so they focus on expenses, the one part they can control.

“The Fastlane is a business and lifestyle strategy characterized by Controllable Unlimited Leverage (CUL), hence creating an optimal environment for rapid wealth creation and extraordinary lifestyles.” Most importantly:

You have to create freedom and self-ownership, without those you can’t become rich quickly.

Trying to hitchhike on someone else’s fastlane is dangerous, you have no control, and could get ruined.

The Monk and the Riddle by Randy Komisar

The Lean Startup by Eric Reis