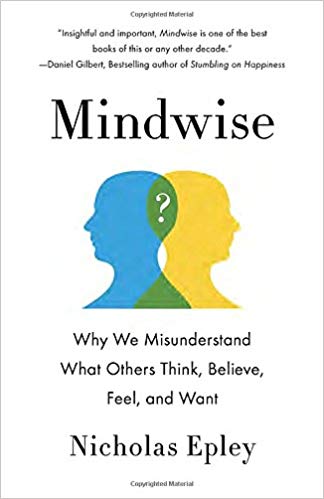 Good for breaking down the notion that you have any idea why you do what you do, or why other people do what they do, or that you understand how you or others behave or what you or others think. Basically, we know nothing.

“Although you might have some sense of how smart your coworkers think you are, you appear to have no clue about which coworkers in particular find you smart and which do not.”

“I’m afraid not. These studies found that people are only slightly better than chance at guessing who in a group likes them and who does not (the average correlation here was a meager .18).”

“Getting to know someone, even over a lifetime of marriage, creates an illusion of insight that far surpasses actual insight.”

“This experiment has its flaws, but it inspired decades of research that revealed a startling message— that there can be a significant disconnect between what people think about themselves and how they actually behave.”

““Excuse me, I have five pages. May I use the Xerox machine, because I need to make some copies?” That’s right, because I need to make some copies. This follows the standard script but includes a nonsensical reason. Of course you have to make copies. What else are you going to do with the copy machine, make sandwiches? But because the request follows the well-learned routine, it automatically triggers compliance. So sure enough, a full 93 percent of people granted the favor, statistically identical to the good-reason condition.”

“The only difference in the way we make sense of our own minds versus other people’s minds is that we know we’re guessing about the minds of others. The sense of privileged access you have to the actual workings of your own mind— to the causes and processes that guide your thoughts and behavior— appears to be an illusion.”

“In one large survey of happiness, for instance, having positive relationships with friends and family members was the only necessary ingredient for being very happy.”

“The point here is that few of us are quite the celebrity that our own experience suggests we might be; nor are we under as much careful scrutiny from others as we might expect.”

“First, the cognitive declines observed across age vary around the world. Cultures that revere the elderly as wise, sage, and learned— such as in parts of China— do not show the same degree of decline observed in cultures with more negative views of the elderly— such as in most of the United States. 38 These stereotypes about aging not only seem to affect mental functioning, they seem to affect a person’s physical functioning as well.”

“What’s the best way to get someone a gift? The science is clear. You don’t try to adopt another person’s perspective and guess better. Instead, you adopt a different approach. You have to actually get the other person’s perspective, and perhaps the only way to do that is to ask what they want, or listen carefully while they drop hints, and then give it to them. 23 That turns out to be widely applicable wisdom.”

“When that person finished, they would hand the stick to another elder, who would first have to reiterate the last speaker’s position to that person’s satisfaction. Only when the first person felt understood could the next person make a new point. The brilliance of this method comes not from its ability to enable speaking but, rather, from how it fosters listening. If you have to reiterate someone else’s point to their satisfaction, then you’ll find out if you’ve understood correctly or incorrectly.”

“In fact, one common laboratory technique for creating fast friends is to have two strangers disclose private thoughts or memories to each other. This is why shyness is one of social life’s biggest curses. Not only are shy people commonly misinterpreted as arrogant rather than anxious, but their anxiety also keeps them disconnected from the very relationships that could increase their happiness.”