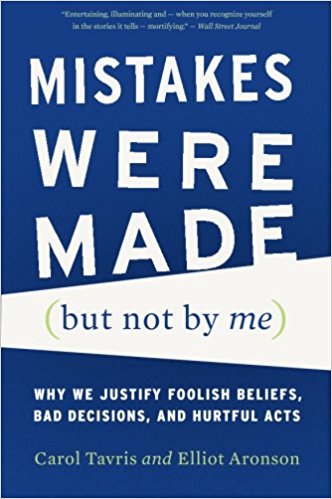 Fantastic introduction to biases and how to identify them in ourselves and others. Read it! Sort of like the other-minded companion to Paradox of Choice.

“Most people, when directly confronted by evidence that they are wrong, do not change their point of view or course of action but justify it even more tenaciously. Even irrefutable evidence is rarely enough to pierce the mental armor of self-justification.”

“We look at the behavior of politicians with amusement or alarm or horror, but, psychologically, what they do is no different in kind, though certainly in consequence, from what most of us have done at one time or another in our private lives. We stay in an unhappy relationship or merely one that is going nowhere because, after all, we invested so much time in making it work. We stay in a deadening job way too long because we look for all the reasons to justify staying and are unable to clearly assess the benefits of leaving. We buy a lemon of a car because it looks gorgeous, spend thousands of dollars to keep the damn thing running, and then we spend even more to justify that investment. We self-righteously create a rift with a friend or relative over some real or imagined slight, yet see ourselves as the pursuers of peace— if only the other side would apologize and make amends.”

“When we cross these lines, we are justifying behavior that we know is wrong precisely so that we can continue to see ourselves as honest people and not criminals or thieves.”

“Memories are often pruned and shaped by an ego-enhancing bias that blurs the edges of past events, softens culpability, and distorts what really happened.”

Memory and why it sucks:

Love and Marriage and Self Justification

Letting Go and Owning Up: