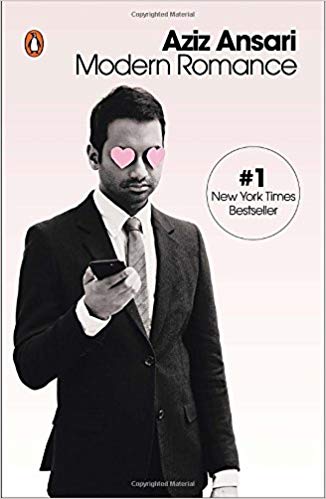 A fun and informative look at modern dating culture. Nothing that “new,” persay, but having it presented by Aziz makes it fun. Their data is interesting too.

“We each sit alone, staring at this black screen with a whole range of emotions. But in a strange way, we are all doing it together, and we should take solace in the fact that no one has a clue what’s going on.”

“We want something that’s very passionate, or boiling, from the get-go. In the past, people weren’t looking for something boiling; they just needed some water. Once they found it and committed to a life together, they did their best to heat things up. Now, if things aren’t boiling, committing to marriage seems premature. But searching for a soul mate takes a long time and requires enormous emotional investment. The problem is that this search for the perfect person can generate a lot of stress. Younger generations face immense pressure to find the “perfect person” that simply didn’t exist in the past when “good enough” was good enough.”

“Since our expectations are so high, today people are quick to break things off when their relationship doesn’t meet them (touch the hair, no boner). Cherlin would also like me to reiterate that this hair/ boner analogy is mine and mine alone.”

“Marriage was an economic institution in which you were given a partnership for life in terms of children and social status and succession and companionship. But now we want our partner to still give us all these things, but in addition I want you to be my best friend and my trusted confidant and my passionate lover to boot, and we live twice as long. So we come to one person, and we basically are asking them to give us what once an entire village used to provide: Give me belonging, give me identity, give me continuity, but give me transcendence and mystery and awe all in one. Give me comfort, give me edge. Give me novelty, give me familiarity. Give me predictability, give me surprise. And we think it’s a given, and toys and lingerie are going to save us with that.”

“…the muscles in our brain that help us with spontaneous conversation are getting less exercise in the text-filled world, so our skills are declining.”

“It made me wonder whether our ability and desire to interact with strangers is another muscle that risks atrophy in the smartphone world. You don’t need to make small talk with strangers when you can read the Beverly Hills, 90210 Wikipedia page anytime you want. Honestly, what stranger can compete with a video that documents the budding friendship of two baby hippopotamuses? No one, that’s who.”

“As a medium, it’s safe to say, texting facilitates flakiness and rudeness and many other personality traits that would not be expressed in a phone call or an in-person interaction.”

““After I left he texted me, ‘Hi [name redacted], this is [first name, last name], we’re going on a date.’ His confidence, straightforwardness, and refreshingly gentlemanly approach (vs. skirting around ‘lets hang out some time’) made for an incredible first impression and had a lasting effect.””

There is no official guidebook anywhere on texting yet, but a cultural consensus has slowly formed in regard to texts. Some basic rules:

“However, the women were most attracted to the “uncertain” group. They also later reported thinking about the “uncertain” men the most. When you think about people more, this increases their presence in your mind, which ultimately can lead to feelings of attraction.”

The Truth by Neil Strauss