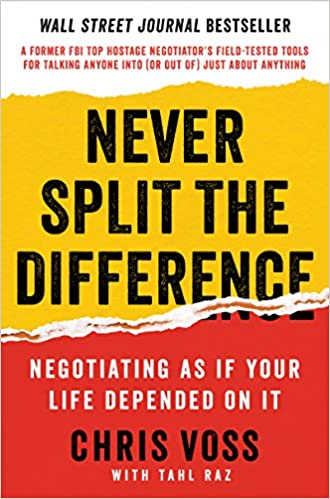 The most useful book on negotiation I've read, filled with great stories and examples to help carry you through the methods.

It all starts with the universally applicable premise that people want to be understood and accepted. Listening is the cheapest, yet most effective concession we can make to get there. By listening intensely, a negotiator demonstrates empathy and shows a sincere desire to better understand what the other side is experiencing.

The goal is to identify what your counterparts actually need (monetarily, emotionally, or otherwise) and get them feeling safe enough to talk and talk and talk some more about what they want.

Going too fast is one of the mistakes all negotiators are prone to making. If we’re too much in a hurry, people can feel as if they’re not being heard and we risk undermining the rapport and trust we’ve built.

Most of the time, you should be using the positive/playful voice. It’s the voice of an easygoing, good-natured person. Your attitude is light and encouraging. The key here is to relax and smile while you’re talking. A smile, even while talking on the phone, has an impact tonally that the other person will pick up on.

When people are in a positive frame of mind, they think more quickly, and are more likely to collaborate and problem-solve (instead of fight and resist). It applies to the smile-er as much as to the smile-ee: a smile on your face, and in your voice, will increase your own mental agility.

for the FBI, a “mirror” is when you repeat the last three words (or the critical one to three words) of what someone has just said. Of the entirety of the FBI’s hostage negotiation skill set, mirroring is the closest one gets to a Jedi mind trick.

By repeating back what people say, you trigger this mirroring instinct and your counterpart will inevitably elaborate on what was just said and sustain the process of connecting.

The intention behind most mirrors should be “Please, help me understand.”

Ask someone, “What do you mean by that?” and you’re likely to incite irritation or defensiveness.

The direct or assertive voice: Used rarely. Will cause problems and create pushback.

Tactical empathy is understanding the feelings and mindset of another in the moment and also hearing what is behind those feelings so you increase your influence in all the moments that follow. It’s bringing our attention to both the emotional obstacles and the potential pathways to getting an agreement done.

Exposing negative thoughts to daylight—“It looks like you don’t want to go back to jail”—makes them seem less frightening.

And when I make a mistake—something that happens a lot—I always acknowledge the other person’s anger. I’ve found the phrase “Look, I’m an asshole” to be an amazingly effective way to make problems go away.

Research shows that the best way to deal with negativity is to observe it, without reaction and without judgment. Then consciously label each negative feeling and replace it with positive, compassionate, and solution-based thoughts.

But at the end of the day, “Yes” is often a meaningless answer that hides deeper objections (and “Maybe” is even worse). Pushing hard for “Yes” doesn’t get a negotiator any closer to a win; it just angers the other side.

… you have to train yourself to hear “No” as something other than rejection, and respond accordingly. When someone tells you “No,” you need to rethink the word in one of its alternative—and much more real—meanings:

There are actually three kinds of “Yes”: Counterfeit, Confirmation, and Commitment.

A counterfeit “yes” is one in which your counterpart plans on saying “no” but either feels “yes” is an easier escape route or just wants to disingenuously keep the conversation going to obtain more information or some other kind of edge.

A confirmation “yes” is generally innocent, a reflexive response to a black-or-white question; it’s sometimes used to lay a trap but mostly it’s just simple affirmation with no promise of action.

And a commitment “yes” is the real deal; it’s a true agreement that leads to action, a “yes” at the table that ends with a signature on the contract.

Gun for a “Yes” straight off the bat, though, and your counterpart gets defensive, wary, and skittish. That’s why I tell my students that, if you’re trying to sell something, don’t start with “Do you have a few minutes to talk?” Instead ask, “Is now a bad time to talk?” Either you get “Yes, it is a bad time” followed by a good time or a request to go away, or you get “No, it’s not” and total focus.

You provoke a “No” with this one-sentence email. Have you given up on this project?

"No” is not a failure. We have learned that “No” is the anti-“Yes” and therefore a word to be avoided at all costs. But it really often just means “Wait” or “I’m not comfortable with that.”

Saying “No” makes the speaker feel safe, secure, and in control, so trigger it.

the sweetest two words in any negotiation are actually “That’s right.”

when negotiators tell their counterparts about their deadline, they get better deals. It's true. First, by revealing your cutoff you reduce the risk of impasse. And second, when an opponent knows your deadline, he'll get to the real deal- and concessionmaking more quickly.

To get real leverage, you have to persuade them that they have something concrete to lose if the deal falls through.

I suggest you let the other side anchor monetary negotiations.

Then, once you've picked out what you want, instead of hitting them with a hard offer, you can just say the price is a bit more than you budgeted and ask for help with one of the greatest-of-all-time calibrated questions: “How am I supposed to do that?" The critical part of this approach is that you really are asking for help and your delivery must convey that. With this negotiating scheme, instead of bullying the clerk, you're asking for their advice and giving them the illusion of control.

"I am so grateful. You've been very generous, and I can't thank you enough. The truck is no doubt worth more than my price," I said. “I'm sorry, I just can't do that."

The Ackerman model is an offer-counteroffer method:

You're going to have to embrace regular, thoughtful conflict as the basis of effective negotiation-and of life. Please remember that our emphasis throughout the book is that the adversary is the situation and that the person that you appear to be in conflict with is actually your partner.