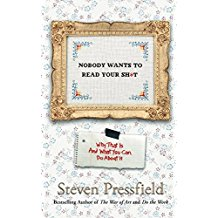 It’s a good book for some writing tips on making your stories more compelling. Especially important in a world with so many information sources competing for people’s attention. Very readable, quick, and you’ll get some good notes from it.

Nobody wants to read your shit, so what’s the solution?

Streamline your message, pare it down to it’s simplest, clearest form.Make its expression fun, or sexy or interesting or whatever you have to do to make them helpless to not read it.Apply that to all forms of writing or commerce.

Reading and writing is a transaction, the reader donates their time, and as the writer, you must supply value to them during the time that they’re donating. They mustn’t feel like they wasted their time on you.

For every sentence, ask yourself: “Is this interesting? Is it fun or challenging or inventive? Am I giving the reader enough? Is she bored? Is she following where I want to lead her?”

A good concept makes the audience see your product from a very specific, sympathetic point of view and by its logic (or faux logic) renders all other points of view and all competing products moot and impotent.

When you as a writer carry over and apply this mode of thinking to other fields, say the writing of novels or movies or nonfiction, the first question you ask yourself at the start of any project is, “What’s the concept?”

“Watching this, I vowed that if I ever found myself in the position of being a client—even if it was something as mundane as hiring a designer to remodel my kitchen—I would shut up and let the professional do her work. I’ve been true to that pledge, and it has never failed.”

“Calling 7Up “the Uncola” positioned the drink not as a poor second-best to Coke or Pepsi, but as an equal alternative. Just as good, only different. Define the problem and you’re halfway to the solution.”

Defining the Problem in Fiction

“Ask not, “What is the solution?” Ask, “What is the problem?” The problem in fiction, from the thrashing writer’s point of view, is almost always, “What is this damn thing about?” In other words, what’s the theme?”

“A real writer (or artist or entrepreneur) has something to give. She has lived enough and suffered enough and thought deeply enough about her experience to be able to process it into something that is of value to others, even if only as entertainment.”

You’re not better than it, don’t fight it.

“You, the writer, have to keep them riveted in their seats for that length of time. How do you do that? By hooking them (Act One), building the tension and complications (Act Two), and paying it all off (Act Three).”

“How can you tell when you’ve got a good Inciting Incident? When the movie’s climax is embedded within it. Apollo Creed picks Rocky Balboa out of the book of fighters and says, “I’m gonna give this chump a shot at the title.” That’s the Inciting Incident of Rocky I. As soon as we hear it, we know that the climax of the movie will be Apollo and Rocky slugging it out for the heavyweight championship of the world.”

Start at the end. Begin with the climax, then work backward to the beginning.

How high should the stakes be in your story? As high as possible. High stakes = high emotional involvement by the audience.

Get your characters in danger as quickly as possible and keep ratcheting up that jeopardy throughout the story.

“A perennial query: Should I move to Los Angeles if I want to write for the movies or TV? Do I have to pack up for New York if I want to work in fashion? My dream is to be in adult films; do I have to move to the San Fernando Valley? You do. That’s how you learn.”

“Anovel will take you two years to write. Or three or four or five. Can you do that? Can you sustain yourself financially? Emotionally? Can your spouse and children handle it? Can you maintain your motivation over that length of time? Your self-belief? Your sanity? If necessary, can you scrap your first eighteen months’ work and start over from scratch?”

Can you do a first draft in three months? Too daunting? How about a rough sketch in three weeks? Still too scary? Maybe a rough-rough in seven days? Remember, the enemy in an endurance enterprise is not time. The enemy is Resistance.

Thinking in multiple drafts is a corollary of thinking in blocks of time. If we know we’re going to do fifteen drafts before we’re done, we don’t panic when Draft #6 is still a mess.

What are the universal structural elements of all stories? Hook. Build. Payoff. This is the shape any story must take. A beginning that grabs the listener. A middle that escalates in tension, suspense, stakes, and excitement. And an ending that brings it all home with a bang.

What, we ask ourselves, is the climax of Grandma Julia’s story? What scene or sequence does the entire saga build to? (Remember, it doesn’t have to be the latest chronologically.)

If the Hook in The War of Art is, “Here’s the problem” … If the Build is, “Here’s the solution” … Then the Payoff is, “Ms. Writer, your role in this timeless, epic struggle is noble, valorous, and necessary. Heed the calling of your heart. Stand and go forth.”

Which idea, of all those swimming inside your brain, are you compelled to pursue the way Ahab was driven to hunt Moby Dick?