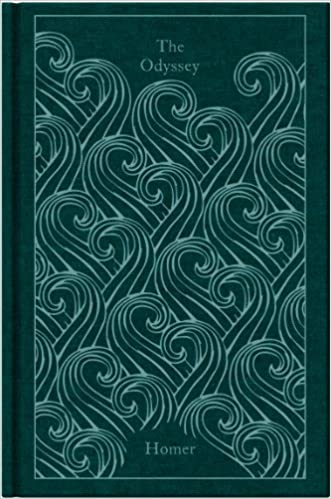 Honestly a fun, good story, that highlights the storytelling abilities of Homer and ancient poetry. Worth the read. Much better than The Iliad.

You can also read my more in-depth review here.

I would rather live through untold hardships to reach home in the end and see that happy day, than come straight back and die at my own hearth, as Agamemnon died by the wiles of his wife and Aegisthus. (Page 33)

it gives me little pleasure to call myself the lord of all this wealth, since, as you must have heard from your fathers, whoever they may be, I have had much sorrow in my life and have already lost one lovely dwelling full of precious things. How happy I could be, here in my house, with even a third of my former estate, if those friends of mine were still alive who died long ago on the broad plains of Troy (Page 43)

"Before embarking,” said the old man in reply, "you should have offered rich sacrifice to Zeus and all the other gods, if you wished to get home fast across the wine-dark sea. (Page 52)

leave me to wash the brine from my shoulders and rub my body with olive-oil. (Page 81)

But before we were out of earshot, I shouted out derisive words at Polyphemus. "Cyclops! So he was not such a weakling after all, the man whose friends you meant to overpower and eat in your hollow cave! And your crimes were bound to catch up with you, you brute, who did not shrink from devouring your guests. Now Zeus and all the other gods have paid you out."'My words so enraged the Cyclops that he tore the top off a great pinnacle of rock and hurled it at us. The rock fell just ahead of our blue-painted bows. As it plunged in, the water surged up and the backwash, like a swell from the open sea, swept us landward and nearly drove us on to the beach… 'But my temper was up; their words did not dissuade me, and in my rage I shouted back at him once more: "Cyclops, if anyone ever asks you how you came by your blindness, tell him your eye was put out by Odysseus, sacker of cities, the son of Laertes, who lives in Ithaca." (Page 122)

Then we shook lots in a bronze helmet and out jumped the lot of the great-hearted Eurylochus, (Page 130)

Ah, I wish I were as young as you or as young as I feel; or that I were the noble Odysseus' son, or Odysseus himself, back from his travels. I would be ready here and now to let anyone cut my head off, if I didn't go straight down to the palace of Laertes' heir Odysseus and kill the lot of them. And if they did overwhelm me by numbers, single-handed as I would be, I would rather die by the sword in my own house than witness the perpetual repetition of these outrages, the brutal treatment of visitors, men hauling the maids about for their foul purposes in that lovely house, wine running like water, and those villains gorging  themselves, just for the sport of the thing, on and on, and not likely to get anywhere. (Page 212)

Athene gestured with her eyebrows; Odysseus saw this, and leaving the house went through the walled yard and presented himself before her. Athene spoke: 'Son of Laertes, favourite of Zeus, Odysseus of the nimble wits, speak now to Telemachus and hide nothing so that the pair of you can plot the downfall and death 70 of the Suitors, and then make your way to the great town. I will not leave you alone for long: I am eager for the fight.' (Page 214)

With that he passed by, and as he did so the fool landed a kick on Odysseus' hip, failing, however, to push him off the path, so firm was his stance. Odysseus debated whether to leap at the fellow and kill him with his staff or to lift him by his middle and smash his head on the ground. In the end he managed to control himself. (Page 228)

As they stood talking, a dog lying there lifted his head and pricked up his ears. Argus was his name. Patient Odysseus himself had owned and bred him, though he had sailed for holy Ilium before he could reap the benefit. In years gone by the young huntsmen had often taken him out after wild goats, deer and hares. But now, in his owner's absence, he lay abandoned on the heaps of dung from the mules and cattle which lay in profusion at the gate, awaiting removal by Odysseus' servants as manure for his great estate. There, full of vermin, lay Argus the hound. But directly he became aware of Odysseus' presence, he wagged his tail and dropped his ears, though he lacked the strength now to come nearer to his master… the black hand of Death descended on him the moment he caught sight of Odysseus after twenty years. (Page 230)

'Go and bring this stranger here to me. Didn't you notice that my son sneezed a blessing on all I had said? May this mean that death is inevitable for all the Suitors! (Page 236)

Under those rags of his, what a thigh the old fellow has! Irus is going to be un-Irused. He was looking for trouble and he'll find it. (Page 241)

Laertes answered him: 'If you who have come here really are my son Odysseus, home again, give me some definite proof to convince me. (Page 319)

But at this moment Zeus flung a flaming thunderbolt which fell in front of the bright-eyed Daughter of that formidable Sire. Athene called out to Odysseus: 'Odysseus, favourite of Zeus, resourceful son of Laertes, hold your hand! Stop fighting your countrymen, in case you incur the wrath of Zeus the Thunderer.' Odysseus obeyed her, and his heart rejoiced. Then Pallas Athene, Daughter of aegis-bearing Zeus, still using Mentor's form and voice for her disguise, established peace between the two sides. (Page 324)